The Eagles got their burner with the 21st pick in the draft. His addition significantly impacts other Eagles fantasy assets. A quick look with @FFB_Vern. 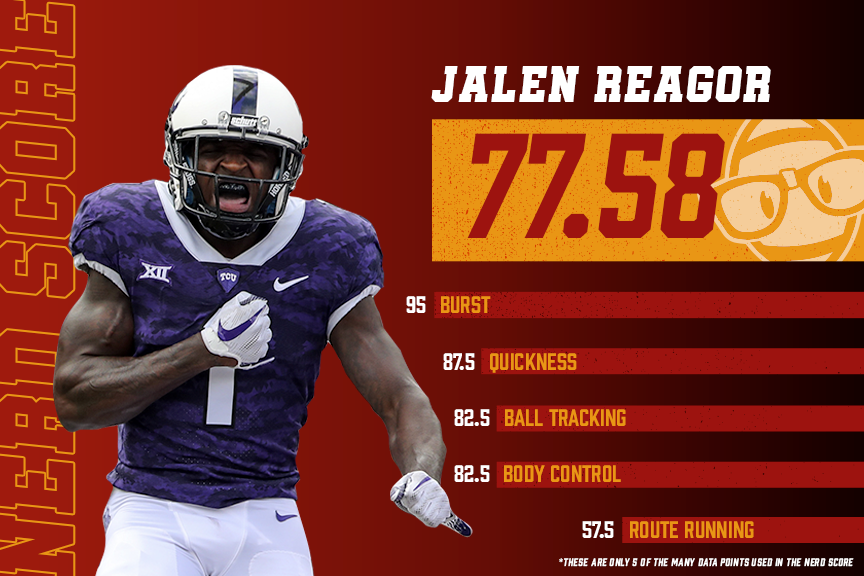 At first, most Eagles fans were upset that Howie Roseman and the Eagles organization not only missed an opportunity to get the best receiver in the draft but also allowed him to drop in the laps of their most competitive division rival. Now they must live with that choice twice per season. While Eagles fans may have been disappointed, Reagor was still a great selection at 21 overall.

Now that the initial disappointment and shock has waned, we can look forward. We must take a step back and remember we care about the fantasy impact of the selection, and Reagor is a true game-changer for the fantasy value of Carson Wentz and other Eagles playmakers.

For an extensive look at Reagor’s capabilities, take a look at his draft profile, as written by Derek Bosworth. The tape shows Jalen Reagor as a fast and explosive player. He is a legitimate home run threat when he gets the ball in his hands with any space. His speed came into question at the combine only turning in a 4.47 40-yard dash, but the tape contradicts that metric. According to NerdScore, Reagor was only behind Ruggs’ in-game speed and is third overall among receivers. This aspect of his game is what Eagles fans and fantasy owners have been clamoring for over the last two years.

The best thing about landing in Philadelphia is Jalen Reagor gets to learn from one of the best speed receivers in the league: DeSean Jackson. Jackson’s 11-year journey and evolution in the NFL will greatly benefit Reagor in understanding his career arc and learning how to take care of his body early. Assuming he takes coaching and mentorship well, Reagor’s future fantasy potential could be that of DeSean Jackson’s production over the peak of his career: a big game monster with occasional bust weeks.

The real question we should be asking is, “how does this benefit other fantasy assets in the Eagles franchise?”

Wentz owners rejoice! The last time Wentz had a “deep threat” (by the loosest definition) that was healthy all season, he was being considered an MVP candidate, and the Eagles won Super Bowl LII. That “deep threat” was Torrey Smith, whose only impact was to force defenses to be somewhat honest. During that season, Wentz was on another planet from a production standpoint with a TD% of 7.5 and a YPA of 7.7.

Reagor is already better than any deep threat Wentz has had in his career save for DeSean Jackson. Reagor will help move the ball in the short and intermediate areas of the field with his YAC ability (2nd in YAC per NerdScore). He has some development ahead of him in the route running department, but the mentorship of Jackson and coaching should help him sharpen his route tree. Also, he will be working with the best passer in his entire career.

Jalen Reagor is more than a “between the 20s” burner. He provides his quarterbacks a notable target area through his catch radius. He has the flexibility to dig out low thrown balls and the hops to high point the ball, which will help Carson all over the field. This high-pointing ability has been shown frequently in the Red Zone during Reagor’s tenure at TCU. We could see Reagor’s talent inside the 20 help Wentz to return to his 2017 form, where he had a 40% TD rate on pass attempts in the Red Zone.

In 2019 Sanders had an amazing breakout season as a rookie amassing 1300+ all-purpose yards. In 2019, Sanders saw a stacked box 11% of the time per Next Gen Stats, and we should expect this frequency to drop. Reagor’s deep threat ability naturally needs to be respected by the defense. This should cause the defensive coordinator’s to think twice about stacking the box for any kind of numbers advantage.

That same effect should allow Sanders to get more activity in the passing game. Sanders had 50 receptions last season and averaged four receptions per game in the last seven weeks of the season. Miles has high aspirations as a player. He recently said he wanted to “emulate Christian McCaffrey,” and Reagor’s presence will help him do that.

Zach Ertz and Dallas Goedert should have a great synergy with Reagor’s presence on the field. This synergy creates some wonderful scenarios to imagine.

Think about 12 personnel with both burners on the field in Jackson and Reagor. How are defensive Coordinators going to respond to this? Ertz and Goedert can block, or they run routes out of this package. If they run routes they will operate in a ton of space, likely with single coverage. This would most likely help Ertz more than Goedert. If not running routes, its max protection for deep routes to develop! This is a wonderful dynamic for the Eagles’ coaching staff.

In this same personnel package, Ertz and Goedert could block for gadget plays like jet sweeps or even smoke routes and bubble screens. The bubble screens would benefit from bigger bodies blocking for these fast receivers. Doug Pederson now has an asset to make life very complicated for opposing defenses.

The amount of leagues that still have D/STs in lineups is dwindling, but if your league has D/ST, Reagor will boost the unit’s value. Reagor is an explosive kick and punt returner who could add positive variance to the Eagles D/ST. If others in your leagues are too focused on recent secondary shortcomings, the opportunity will be ripe. The upside gained from scooping them up is worth a cheap acquisition. If they aren’t freely available on the wire, they should be available as an add-on in one of your many off-season transactions.

Next Moves for Fantasy

Reagor is a net positive to several fantasy assets on the Eagles. Be quick to make your moves before others grasp how good this is for overall offensive production. As for Reagor’s value, it is likely to be a volatile week-to-week, but the collective performances will average out to a top-24 finish. He may be frustrating to own, and he will likely have more real football value than fantasy football value this season. As he refines his short to intermediate route running, he can develop into a less volatile asset with the crazy upside. If he drops to the late first in your rookie drafts, that would be the time to snag him.