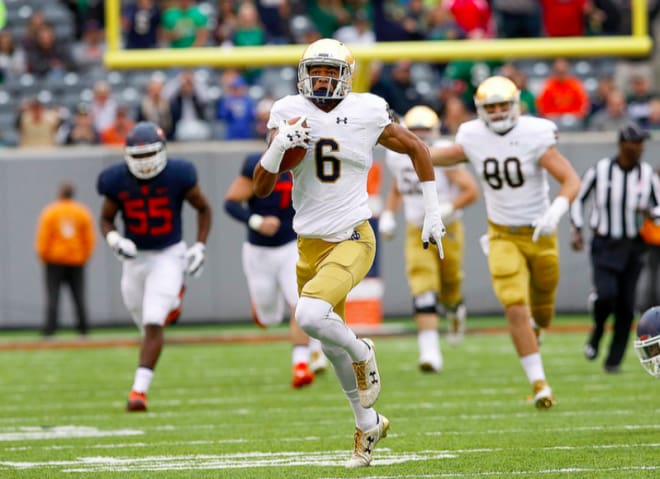 It’s not too often that I’d endorse a WR with a mere 468 yards for the season, as a 1st round pick. Yet, that’s where I stand with Equanimeous St Brown. The peculiarly named wideout was named after the word ‘equanimity’, which, according to Merriam-Webster’s online dictionary, means “calm emotions when dealing with problems or pressure.”

The 6’5” WR came into the 2017 season with many expecting big things. Expectations were that he would be among the elite WRs in college in terms of yardage and TDs. It was therefore incredibly puzzling that his numbers were so miniscule. The biggest reasons for this were immense struggles from Notre Dame’s QB play and an astoundingly limited passing offense. You can see a breakdown of ESB’s underwhelming college production below:

Despite the disappointing year, the obvious appeal with ESB is his physical prowess. His sheer size is Megatron-esque. He’s 6’5” 205 pounds and quite strong. His dad was a professional bodybuilder and instructed Equanimeous to begin lifting weights when he was 5 years old, and they currently train together four times a week, on average. Equanimeous says he can bench press 300 pounds and developed an eight-pack without ever focusing on abdominal exercises. Furthermore, he’s been clocked running a 4.44 40-yard dash. That sort of profile is reminiscent of Martavis Bryant, Mike Evans, and some other elite WRs through the years.

He also has an incredible ability to catch the ball. He only recorded one drop in his entire high school career, and attributes his strong hands to the hundreds of balls he catches each week from the JUGS machine stationed inside his garage.

To wet your taste buds, even more, he has a 4.0 GPA and speaks 4 languages…. the guy is incredibly smart. A physical marvel who’s incredibly intelligent and with great hands is a deadly combination.

According to Walter Football, “Sources who have done advance work on the 2018 class are really impressed and intrigued with St. Brown. They say he is a super-polished route runner with tremendous speed, athletic ability, body control, and hands. They said they think St. Brown could be more gifted and talented than the three wideouts who went in the top 10 of the 2017 NFL Draft, but St. Brown gets fewer opportunities to show his skill.”

The question will be whether all the theoretical hype can live up to the expectations and produce, as he has not currently done so. All the signs are pointing up for me on this guy. I love him as a prospect. I’ve seen a few DLF mock drafts with him going at the end of the 1st round, which is a steal. This draft is shaping up to have a deep 1st round with top end potential throughout. Count ESB among the best.

Where is the ‘Love’
Richie James- Leaving Behind a Legacy
25% Off Sitewide - Use Coupon Code "Black-Friday".