Eyes on the Prizes: George Pickens

“Eyes on the Prizes” takes a look at some of the rising devy prospects who could be key names to monitor moving forward. Today’s edition by @DynastyTools takes a deep dive to look at true freshman George Pickens, a Georgia WR who has drawn comparisons to former Dawg A.J. Green. 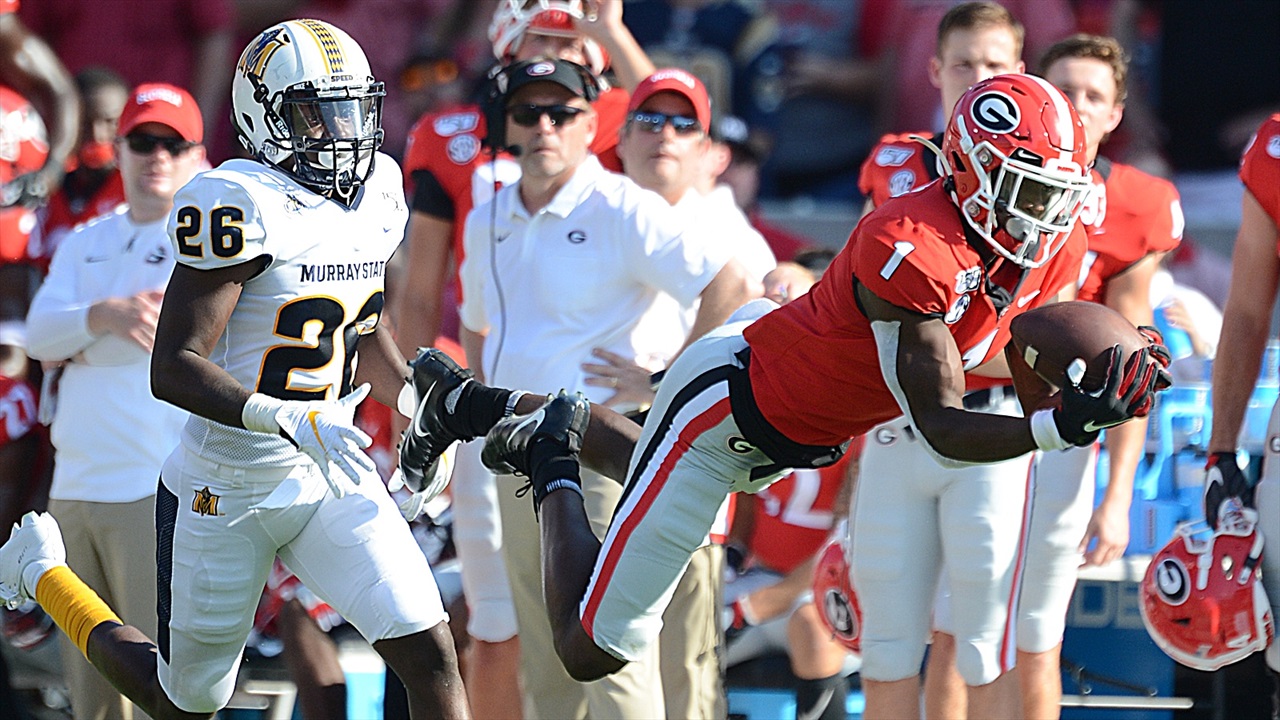 This website is not called Dynasty Players, it’s called Dynasty Nerds, and it’s a genuine nerd move to be thinking all the way ahead to devy players who won’t become draft-eligible until 2022, but that’s the level of geekdom you should rightfully expect around here. And today you get it with a breakdown of true freshman Georgia wide receiver George Pickens.

The journey George Pickens took to arrive between the hedges at Georgia’s Sanford Stadium was a circuitous one, to say the least. Pickens, a 5-star recruit from Hoover, Alabama, spent a year and a half as a verbal commit to in-state powerhouse Auburn.

However, when many top recruits signed National Letters of Intent during the NCAA’s early signing period in December, allowing them to enroll for spring classes (and spring football), Pickens chose to forego that opportunity for a simple and highly respectable reason.

“I want to experience as much of high school as I can,” Pickens said at the time, noting that he wanted to experience his full senior year, complete with prom and graduation.

By choosing not to sign early, Pickens remained one of the top unsigned recruits in the nation heading into February’s National Signing Day. Naturally, many schools were interested in trying to flip Pickens away from his commitment to Auburn. Once National Signing Day arrived, Kirby Smart was successful in doing so.

Despite not arriving at Georgia until the summer, Pickens (6-3/190) has quickly emerged as a contributor early in his true freshman season.

For this article, I was able to download and edit highlights from a pair of Georgia games, thanks to the ugamummra YouTube channel, which is a great place to check out all the action from the Dawgs this season.

Pickens was able to impress against Arkansas State and Murray State, which admittedly are far from top-tier opponents. But his performances flashed promise and showed why some have compared him with former Georgia superstar A.J. Green. Those lofty comparisons are certainly premature, but Pickens has showcased skills early on that indicate a range of outcomes that could include big-time star potential.

Since the two games reviewed for this article, Pickens failed to reel in his 2 targets against Notre Dame. Heading into Georgia’s next game against Tennessee, Kirby Smart specifically mentioned wanting to find ways to get Pickens the ball, which they were able to do. Clips of Pickens’ contributions against the Vols are available as the last video below, and they reflect further promise after seeing him contribute against SEC competition.

Let’s not bury the lead here; we might as well start with a clip that will get your attention and build some excitement. This one ought to do it.

On the diving catch here, Pickens shows great poise and body control by rolling into his landing. If he had stayed square to the ground throughout his dive, he’d have inevitably landed square on the ground and exposed the football to hitting the turf as he tried to corral it. By rolling into his landing, he was able to protect the ball throughout the catch process, never exposing it to the ground. It’s a subtle but noteworthy athletic move in mid-air.

The touchdown catch, just two snaps later, showcases the soft hands and field awareness that led Pickens to be such a highly sought-after recruit.

The next video showcases Pickens coming through in a critical moment: a two-minute drive to close out the first half.

The first play features an excellent adjustment to find the soft spot in the zone and settle down within it. The defense initially presents a two-high safety look, but they roll their coverage at the snap, with the strong safety charging hard to overplay D’Andre Swift. Pickens clears the linebacker as the corner bails, so Pickens starts to initially settle down, but as the safety flashes to cross his face, Pickens reacts accordingly by making a secondary lateral move to find the actual soft spot. That’s a nice adjustment to see on the fly from a true freshman in one of his first collegiate games.

The next two plays here feature excellent ball skills and sideline awareness, and the last play, in particular, has Sunday written all over it.

These plays aren’t quite as sexy as the ones featured in the first reels above, but they do show a competent skill foundation for a future star at the X receiver position. Pickens has the speed and route-running skills to create separation and excel on the perimeter of the field.

It’s not all puppy dogs and ice cream with George Pickens just yet. There had to be a flaw, of course, and here it is. Pickens has not yet demonstrated a strong skill set when it comes to reeling in contested catches. The sample size remains limited, but if he is battling with a defensive back at the catch point, thus far it means that the result will be an incompletion.

Pickens certainly has the frame and athletic ability to change that moving forward, but it will be a critical area for him to improve. Thankfully, the SEC competition he faces will offer plenty of practice in that regard.

Plus Blocking Skills (Though Inconsistent)

When motivated, Pickens shows no hesitation about mixing it up physically with defenders. On those plays (which are far too rare early in his career), he does well at keeping a wide base and staying engaged with the block.

However, far too often, he overextends as he engages, which leads to him losing leverage and allows defenders to disengage from the block. At other times, he has a tendency to just bang defensive backs, and the momentum from that impact actually creates separation between Pickens and the defender, allowing defenders to get back in on a play after a brief collision.

So hopefully Pickens can continue improving as a blocker. At least he has shown an ability to perform effectively in that regard. If he can make plays like the ones below his standard, instead of the current pleasant surprises they are to date, he will continue to earn a greater snap share moving ahead.

This clip is another example of something he needs to lose from his game immediately. No coach wants to put players on the field who earn 15-yard flags for entirely avoidable personal fouls. In the play below, Pickens doesn’t like the extra shove he receives from a tackler out of bounds, and he throws the ball at the defender in response, drawing an immediate flag from the ref who is standing right there. Kirby Smart proceeded to pull Pickens from the game and berate him on the sideline for the selfish, undisciplined response. It’s borderline funny in this clip to see Pickens put his arm around Smart, only to have Smart shoo away the contact. Hopefully, Pickens learned his lesson from this and won’t show any similar lack of poise in the future.

This reel is a quick look at the noteworthy plays made by George Pickens in Georgia’s recent game against Tennessee. It’s certainly a promising step forward to see Pickens producing and contributing against SEC competition, but his bullet list scouting report remains spot-on to what he showcased in the reels above:

Pickens still has two college seasons remaining after the 2019 campaign, making him likely part of the 2022 draft class (that is, assuming he doesn’t decide he wants his full senior-year experience in college as he did in high school). With plenty of time to evolve as a prospect, his future ceiling appears to be sky-high, so he’ll be a devy name to monitor sooner rather than later.