Ezekiel Elliott: Should I trade or should I hold?

Zeke managers are in a tough spot this offseason. Should you hold onto the Cowboys RB for another potential RB1 year or get out while you can? 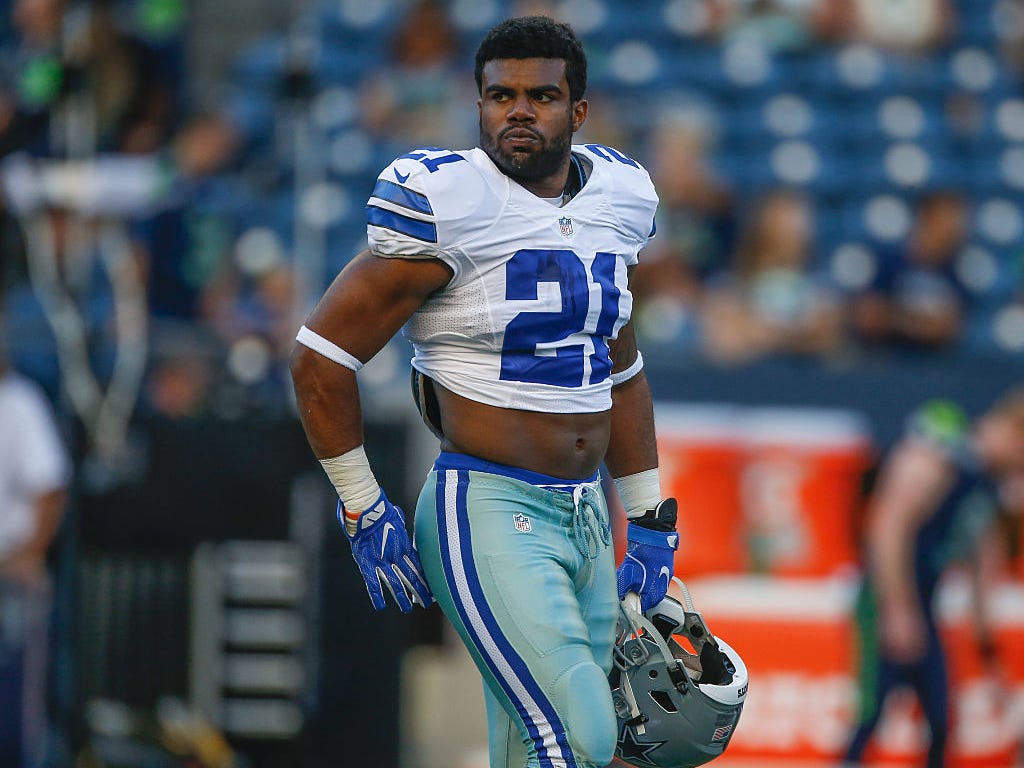 It is the basics in trading. But how do you know what is the high point and the low point of a commodity?

It comes down to three factors when evaluating a commodity: historical reference, understanding economic trends, and capitalizing on other’s fears of collapse.

This brings me to the most complex question for dynasty owners in the 2021 off-season: what is Ezekiel Elliott’s value?

On the one hand, you have a running back who has finished in the top 12 each season he has played in the NFL. On the other hand, you have a back going into his sixth year with 1,400-plus rushes under his belt.

Is Ezekiel Elliott a buy-low candidate, or should you get out from under him and acquire any value he has left?

Zeke has been one of the most reliable and productive running backs in dynasty and the NFL. He has had 1,700-plus yards from scrimmage in three of his five seasons and has averaged 4.5 yards per attempt in his career.

Zeke also entered the NFL at 21 years old, meaning after five seasons, he is only entering his age 26 season this coming year. On top of the rushing, Zeke has been a PPR asset every season and has had 50-plus catches each of the Cowboys’ last three seasons.

If you have been a Zeke owner since the beginning, you probably have a strong fondness for him and may have even won a championship along the way, thanks to his contributions.

This past year, many injuries in Dallas certainly played a factor in Zeke’s output. When Dallas lost Dak Prescott for the year in Week 5, the Cowboys had to resort to Andy Dalton, Ben DiNucci, and Garrett Gilbert the rest of the year.

The injury to Dak certainly let defenses focus on stopping Zeke a bit more, but even worse were the injuries to the Cowboys’ offensive line. The Cowboys had 15 different offensive line combinations by late November last season.

When trying to forecast a future for Zeke, I decided to pull in some career stats for other running backs with four or five straight top-12 seasons when playing the whole year. While all backs may not be the same build or have the same set of supporting players, I think it is essential to see how their careers unfolded.

I cut this list off at year eight, but both Peterson and McCoy had 1,500-plus yards from scrimmage in their ninth season. McCoy was not a huge factor after year nine, while Peterson still had 1,000-plus scrimmage yards in years 12 and 13.

What is highlighted in this list is the run of consecutive seasons (unless shortened by injury) when the player was an RB1 in fantasy football, with the orange cell being the last year they were an RB1.

The data is not conclusive in defining a limitation for how long a player can be successful, but what it does show is most elite running backs still only have a five to six-year window of being an RB1. Peterson is the anomaly, but he has been his entire career. AP is a freak.

Most people saw the collapse of Todd Gurley coming in the last few years. Gurley had been run hard by the Rams and took a beating over his first four seasons, albeit very successful years. He ran 1,042 times for 4,547 yards and 46 TDs in his first four campaigns.

Meanwhile, Zeke had 1,169 attempts, 5,405 yards, and 40 TDs in his first four seasons. If there is a trend here, people should worry about the wear on Zeke’s treads. He has run the ball more frequently than Gurley in his career thus far. Zeke only has 47 fewer career rushes in 17 fewer games played.

Is it time to sell?

If you are an Ezekiel Elliott owner, you are in a bit of a pickle. Zeke’s value is lower than it probably should be due to a tough year with his offensive line decimated and starting QB out. If the Cowboys had stayed healthy, Zeke may have had another top-five season in 2020 and would be worth quite a bit more.

But ask any Todd Gurley owner who held onto him instead of selling: the cliff is steep, and there is no returning from it. Once Zeke’s stock starts to tumble, it will be harder and harder to get value back.

That stock is already slipping.

Realistically, you need to do an in-depth evaluation on your team and ask yourself if you think you have what it takes to win a title this year if Zeke has a low RB1 season. If you think you can, he may be worth holding. If you feel you can’t, you should be moving him immediately.

What kind of a return should you be looking for in Zeke? I would be aiming at owners who have competitive teams and could see the value in Zeke in the short term. Owners that did well last year and have a pick from 1.09 to 1.12 would be a good target. If you could get a deal lined up moving Zeke for a back with less wear like Austin Ekeler, Antonio Gibson, or David Montgomery along with a late first this year, you should be ready to accept.

So, should I trade or should I hold?

Do I think Elliott can have a top-12 season once again in 2021? Absolutely. With everything stacked against him in 2020, Zeke still produced a great dynasty season for his owners.

But time is not on his side anymore. If you are a competing team looking for a shot at life in your RB group, Elliott could be something worth hanging onto or acquiring on a reasonable deal. As I discussed in my article last week, trading draft picks for players with known value is always an excellent strategic tactic, especially for a team competing in the present.

Using history as an example, Zeke may still be on the younger side in age, but the amount of work he has already seen tends to add up over time, even among the elite backs. If you are betting on Zeke now, you are also betting that the Cowboys as a whole unit will be healthy and productive in 2021.

If you are not confident, you have to start asking yourself what Zeke might be worth. More importantly, you should start talking to league mates and seeing what he might be worth to them. While you might be upset with the offers, remember that it might be the best thing you can get for the rest of Zeke’s career.

The time is coming soon when Elliott will not be starting for dynasty teams every week. His value is diminishing. It may be time to sell and get out while you are still a bit ahead.