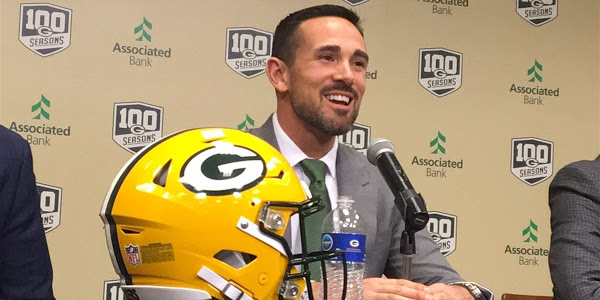 After watching the Tennessee Titans offense most of the season one can’t help but be concerned about the Green Bay offense. But Marcus Mariota is not Aaron Rodgers and Corey Davis is not Davante Adams so take a piece of advice from Mr. Discount Double Check himself and R-E-L-A-X.

LeFleur entered to NFL in 2008 and worked under Kyle Shanahan in Houston and Washington until 2013 and then rejoined Shanahan in Atlanta for 2015 and 2016 where LeFleur coached Matt Ryan to his MVP season. During that MVP season Ryan attempted 58 passes over 21 air yards completing 29 or 50% of them. Rodgers possesses a strong and accurate arm with a willingness to take the deep shot, it will be part of LaFleur’s job to improve Rodgers efficiency on those deep shots. Davante Adams will be there to play the Julio Jones role.

The initial reaction might be a bit of concern for Aaron Jones, per ffstatistics.com Derrick Henry and Dion Lewis had 34.11% and 37.01% of their attempts in 2018 go straight up the middle with Henry averaging 5.26 and Lewis 2.32 yards per carry. Jones however ran 29.3% of his carries up the middle in Green Bay during the 2018 season averaging 6.21 ypc. Jones fantasy production might be more threatened by the proliferation of the shared backfield. The Shanahan coaching tree is adaptive to the skills of the backs on the team – McVay/Gurley, Kyle Shanahan/Davonta Freeman/Tevin Coleman. The real winner in the coaching change may be the tight end position. Jimmy Graham looked to be nearing the end of the line in 2018, but Tennessee’s biggest weapon going into last year was Delanie Walker and San Francisco showed how to use a tight end in a Shanahan offense. The onus will be on Graham to step up or step aside and let LaFleur bring in a legitimate weapon.

Green Bay is in the middle of the pack with expected cap space at $31.5 million for the new coach to work with to go along with ten draft picks including and extra first rounder. Tackle, tight end and edge rusher are the areas that hold the highest priority.

In summary, Aaron Rodgers will be just fine, yes there will be adjustments to just the second head coach in a hall of fame career but Rodgers is a winner and will produce. Davante Adams should repeat his great 2018 as LaFleur is not afraid to feed his start wideout. Aaron Jones is the most talented back on the roster and should hold down 65% of the running back touches. The tight end group is made up of guys in the twilight of their careers and should be addressed in a deep draft class.