San Francisco 49ers Defensive Coordinator Robert Saleh has just been announced as the new Head Coach of the New York Jets. What does that mean for your fantasy assets and their future in New York? It’s an exciting question that @DynastyWildcat will tackle for you! 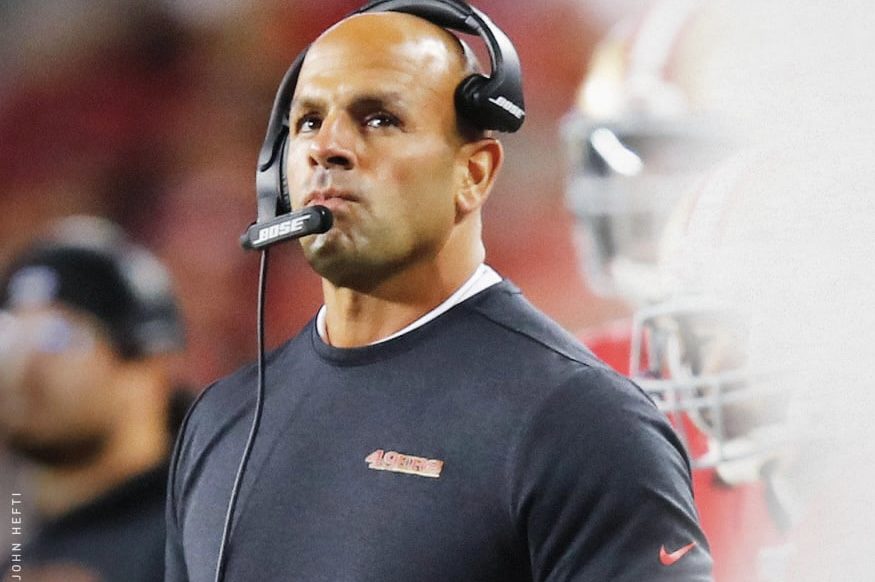 A new head man is leading the Gang Green! San Francisco 49ers Defensive Coordinator Robert Saleh has officially been hired as the Head Coach of the New York Jets. He’s replacing Adam Gase and will begin rebuilding the Jets with the hope of bringing them back to relevance.

Saleh got his coaching career in the NFL started in 2005 with the Houston Texans. He was an intern with the defensive unit. He remained in that role with the Texans until 2009, when he was promoted to assistant linebackers coach. After spending two short years in that position, the Seattle Seahawks brought him in as a Defensive Quality Control Coach under Pete Carrol. He stayed in that role for three seasons and won a Super Bowl with the Seahawks in 2013. After the championship, he was brought onto HC Gus Bradley’s staff as the Linebackers Coach with the Jacksonville Jaguars. After several years in that role, current 49ers HC Kyle Shanahan brought Saleh in as the team’s DC, which brings us today.

With Saleh being a defensive-oriented coach, much of the fantasy impact we’ll see will come from who he chooses as his Offensive Coordinator. The man taking that position is 49ers Passing Game Coordinator Mike LaFleur. LaFleur has been learning under Shanahan for years. He originally joined Shanahan’s staff in 2014 with the Cleveland Browns and followed him to Atlanta, then San Francisco. Now, he will be the OC for the Jets. LaFleur has never been a play-caller in the NFL, but we can get an idea of what we should expect from him.

As previously documented, LaFleur has been studying under Shanahan for years. Similar to Los Angeles Rams HC Sean McVay and Mike’s older brother, Green Bay Packers HC Matt LaFleur. Mike will run a similar system as those coaches do. Meaning, we can expect the Jets to establish the run and use a lot of play-action.

Now, from an offensive perspective, there’s a lot up in the air pertaining to the Jets roster heading into 2021. We don’t know if they will draft a QB early on in the 2021 NFL Draft or if they’ll stick with Sam Darnold. With RB Le’Veon Bell’s departure mid-season and Frank Gore being an unrestricted free agent this offseason, the RB room will demand some attention. It’s more than likely the WR room remains the same, outside of the expected departure of Breshad Perriman. The offensive line was also a mess this season. PFF ranked them as one of the five worst units in the NFL. I expect this offense to make a drastic improvement over what it’s been during the past couple of years. However, unless drastic changes are made, beginning with the offensive line, the ceiling will be limited.

What Does This Mean for Sam Darnold?

One of the more intriguing storylines of the offseason is whether or not the Jets draft a QB at number two overall in the NFL Draft this April. With the LaFleur and the new scheme coming into town, I have some real concerns about Darnold’s future with the team. Darnold is a player we’ve seen thrive in an up-tempo offense. It’s his bread and butter. However, that’s not what Shanahan’s/McVay’s/LaFleur’s system does.

Intriguing News for the Young Guys

The good news regarding these hires stems from some of the more talented, younger players on the roster. These hires give WR Denzel Mims and TE Chris Herndon a big bump in value. Both were limited by Gase and his offensive play calling last season. They should thrive in an offense that utilizes play action and getting the ball in playmakers hands, specifically Herndon. He has the potential to be a middling TE1 next season in this offense, while Mims could pose as a WR3 some weeks as he learns his second offense in as many years.

Another intriguing player of note is RB La’Mical Perine. Perine showed flashes of brilliance during his rookie season and could be someone to keep an eye on during training camp. His one-cut ability and explosiveness could prove to be what LaFleur wants from the RB position leading to him earning some valuable playing time in 2021.

If you were looking to acquire one of these guys, I would aim for Herndon. He should be relatively cheap as you could get him for an aging WR like a T.Y. Hilton or Brandin Cooks in most PPR scoring formats. Perine would be next simply based on cost as it would cost you virtually nothing to acquire him. Maybe, you can take a flier on him and trade someone/something akin to a 2021 third-round pick. The last one on the list to acquire is Mims. That’s not because I like home the least, but because he is the most expensive. You would have to trade at least a 2021 second-round pick.

All-in-all, this is an excellent move by the Jets. It will take some time for it to all come together, but I firmly believe they’re on the right track. LaFleur will bring a new scheme on offense that has repeatedly proven to be successful, no matter who is calling the plays.