When evaluating rookies, many use either film or analytics. Here, @DevyCramps demonstrates ways to combine them in order to improve our evaluations. 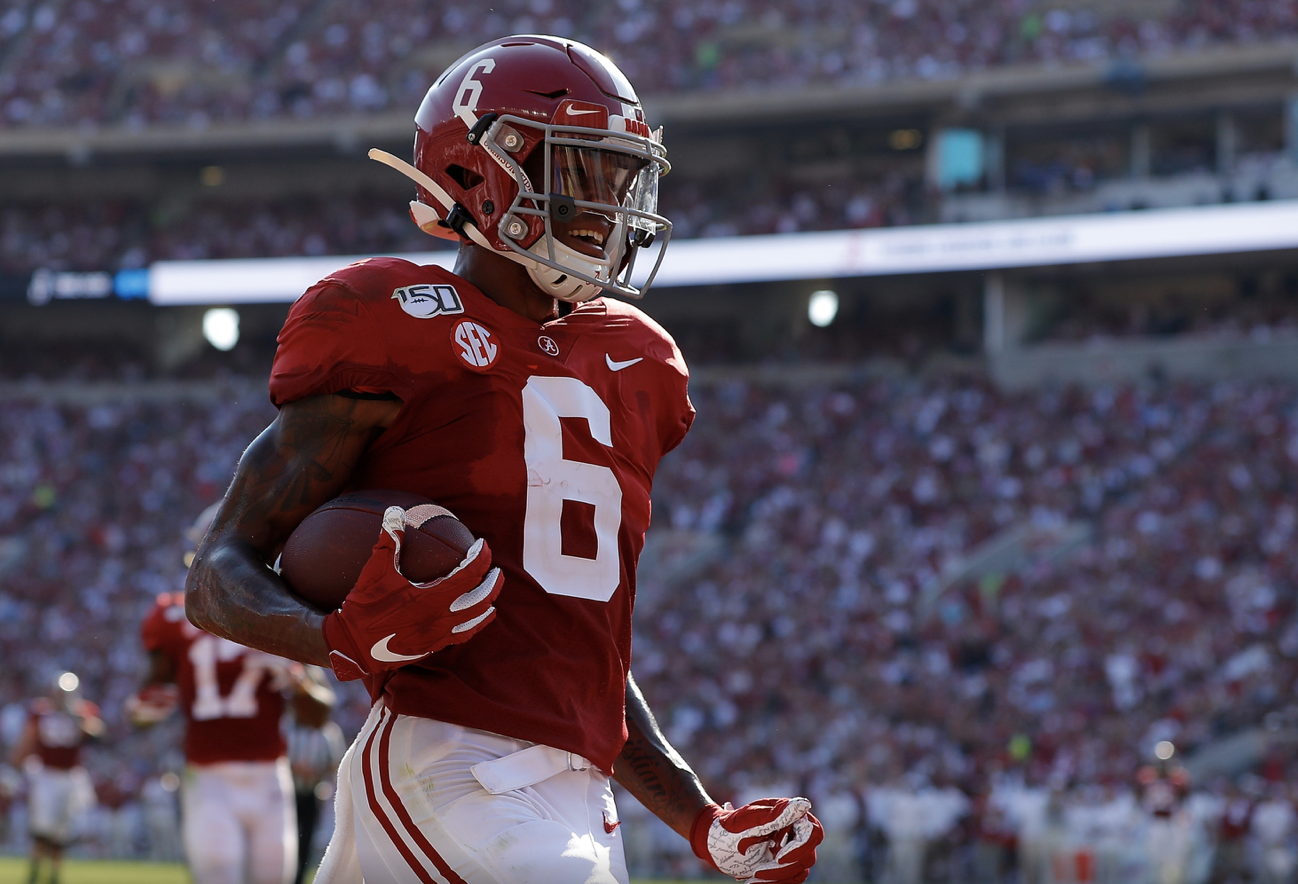 It’s the question everyone asks of rookie evaluators in the dynasty community – film or analytics? Many stand firmly on one side or the other. Recently, analytics has begun to take the football world by storm. Math-loving football junkies have created new metrics and built predictive models to maximize success when it comes to drafting rookies. Many in the community are buying in – as they should.

And then there’s film, which cannot be ignored. Football lovers have been watching film to evaluate prospects for decades now. Many see the rise of analytics in the community and scoff at it, insisting football is not about the numbers. However, the fact is that the numbers have proven statistically significant in some cases, and they must be considered. On the flip side, those who focus on the numbers should consider film, too. Numbers can’t always account for context, and they certainly don’t consider the skills, work ethic, and intelligence required to play in the NFL.

Eagles WR Devonta Smith has been one of the hot topics of the offseason. Film watchers love him, while the analytics suggest he may not be as good as many would like to think. In this article, we’re going to explore ways to combine analytics and film, using Smith as a case study. The 2 metrics we will focus on are Breakout Age (BOA) and Body Mass Index (BMI). The intention is not to specifically evaluate Devonta Smith, but to introduce these metrics and demonstrate ways that we can use both the tape and the numbers to most accurately predict player success.

The concept of BOA and why it matters is simple. If players succeed early in college, it’s a good sign. It means they adapted quickly to the college game and produced against older, often more physically developed players. It didn’t take them much transition time and they didn’t have to gain experience in order to perform, indicating great upside. On the other hand, players with a late breakout age weren’t able to produce until they were the older, more experienced ones. BOA is determined by calculating what % of his team’s receiving production a receiver records, and finding at what age that receiver crossed a threshold of 20%, or 30% depending on who you ask. Outside of draft capital, analytical models use BOA as one of the most significant metrics for predicting WR success. Drew O. explains how clearly BOA can predict fantasy relevance in this thread:

It has been brought to my attention that there are a great many breakout age deniers #onhere or perhaps just some are uninformed.

Let’s see what history can teach us about Devonta’s chances, shall we?

As you can see, there is a pretty obvious correlation between BOA and hit rate. Receivers that breakout early in college historically have succeeded in the NFL at a higher rate than their counterparts who were unable to produce until they were upperclassmen. It still doesn’t account for player development, team situation, and other factors, though.

Usually, we want to see a receiver breakout by their sophomore, or better yet, freshman year. Devonta Smith didn’t do so until his junior year, or senior year depending on what breakout threshold you are using. Many Smith fans point to the fact that as an underclassman, he played behind Henry Ruggs and Jerry Jeudy – both first round picks –  so of course it would have been tough for him to earn play time and targets. However, models have found that college teammate score does not necessarily correlate with NFL production.

A way to evaluate whether Smith may have been held back by his situation is to study the film. Did Smith look good when he got on the field as an underclassman? Was he dominating DBs the way he did as an upperclassman, but still didn’t get targets? If so, that could be considered for his case. If he struggled against DBs as an underclassman, we can conclude that his BOA is an accurate depiction of his development despite his situation.

In 2018, as a sophomore, Smith posted 3 catches for 28 yards against the Ole Miss Rebels. The following year, against the same team, he caught 11 balls for a staggering 274 yards and 5 TDs. Why the exponential difference?

Smith, a sophomore, is lined up against a 4th year player in this video. As you can see, he struggles to separate from the physical DB. The DB successfully bodies him off his route because, at this point in his college career, Smith was underdeveloped and didn’t know how to avoid press or contend with physicality in routes the way he has shown he can over the past 2 seasons.

Here, you see a totally different player. Smith has a smoother release and maintains his line despite dealing with physicality throughout the route. He then makes a tough grab, finishing through contact for the touchdown.

There are similar examples throughout his film when comparing his underclassman years to his upperclassman years. His ability after the catch massively improved, as well as his route technique and overall play strength. In this case, the film supports the data. Devonta was likely not held back significantly by his teammates in his underclassman years. Rather, he developed as a player during his college career until he took off as a junior and senior, dominating the opposition once he came into his own.

This is one way we can look at a player’s tape when considering breakout age and context. Sometimes a player’s production can be held back by various circumstances, and if he looks good on tape as an underclassman, perhaps we can give him the benefit of the doubt. If he looked much better on tape as he got older, we can say his BOA tells an accurate story.

Now, some of you are probably thinking: “well…duh? He got older and developed, of course he looked better as an upperclassman”. And you’re right – normally, as a player matures and receives more coaching, we expect him to improve. And it’s a good sign if he does. Here’s the thing: NFL WRs are not normal. They’re stud athletes who don’t follow the laws of physics that the rest of us are confined to. As such, we can’t treat them as normal. We want to see these athletes step onto the field in college, dominate from day 1, and THEN improve even more. There are always exceptions, and player development is certainly important. However, history tells us that WRs who breakout early in college succeed at a higher rate in the NFL.

The other metric we’ll be addressing is BMI. Smith was one of the focal points of the discussion surrounding BMI this offseason. It is, again, a simple concept as to what it is and why it matters. BMI divides a person’s weight by the square of their height in order to measure overall size.

The NFL is comprised of some of the biggest, strongest athletes in the world, often running full force at each other and using every ounce of their muscle to bring their opponents to the ground or drive them back. Thus, it’s often difficult for smaller players to succeed, even if they are highly talented. 166 lb rookie Devonta Smith is going to have 250 lb veteran linebackers bearing down on him like a freight train as he goes up to make a catch over the middle of the field. That’s not a sight you or I want to see (ok, maybe it is). As Drew O, again, demonstrates in this thread, we want WRs to fall within certain BMI thresholds in order to have the best chance at success:

So… with Devonta Smith racing to the front of the class and people mocking “BmI tWitTeR”….

I suspect its time to dive in… pic.twitter.com/cR7pebdc7F

Lack of size raises questions about durability. It also raises questions about a player’s ability to contend with bigger, more physical players, and to overcome their size issues with strength and technique. This is where the tape comes in. We assume that smaller receivers are often weaker, unable to deal with press coverage or physicality in their routes, or unable to successfully play the ball in contested catch situations. Is this the case for Devonta Smith? Let’s see.

Smaller players can overcome their limitations in many ways. We already saw an example above of Devonta Smith dealing with physicality in his routes. He has also shown the ability to simply avoid the press with his quick feet and smooth acceleration. These skills help him succeed after the catch, too. Turns out it doesn’t matter how small the guy with the ball in his hands is if he can run away from everyone:

He also evidently has enough strength at the catch point, which he showed time and again throughout his junior and senior seasons:

So, despite his smaller size, the tape tells us that Devonta is capable of handling press coverage and physicality in his routes. It also shows us that he excels in contested catch situations. He’s unlikely to break many tackles when linebackers get to him, but he can often run around those tackles. This isn’t to say that you should completely write his BMI off – the truth is probably somewhere in between what the analytics say and what the film says. I’m comfortable with Devonta’s ability on the football field as far as his size and strength. However, history tells us that players his size have a far tougher time succeeding. There may be some concerns with durability, but he clearly has no struggles dealing with physicality in general throughout the game.

As you can see, analytics does have context behind it. When you take the time to thoroughly understand what the numbers mean, you can see how they play out on the football field as well. Combining analytics and film is without a doubt the best way to evaluate players. There’s a ton of information out there, and we have to use as much of it as possible in order to gain an advantage in ranking and drafting these players. When it comes to BOA, we can look at how a player evolved (or didn’t) through his tape to either confirm or dispute that. When it comes to BMI, we can look at a player’s game to see if his size presents a challenge for him in dealing with physicality. Each metric out there that wasn’t addressed in this article has its context, too. By using both the numbers and the tape, we can tell a more accurate story about each prospect we evaluate.