2019 4-round Mock Draft and Fantasy Implications: Round Two 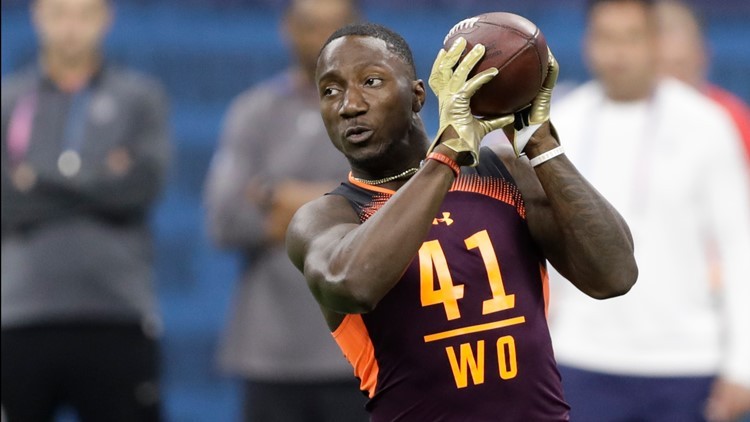 Who doesn’t love mock drafts?  Well, it’s officially the end of #MockDraftSZN and I have my final mock of 2019 ready to roll.  However, this isn’t like any mock draft you’ve seen. This is the second installment of a four round mock draft focuses solely on the fantasy prospects and what their specific landing spots mean for immediate and future value.  There were no trades factored in. *Disclaimer: When I say standard, I don’t mean 0 PPR, I mean non-superflex.*

I’ll admit, there are a couple of guys in this round that are likely going to go in the first round of the draft come Thursday… But that’s just not how they shook out in this mock draft.  Jacobs is the best all-around/pro-style back in this class. I know he doesn’t have the college production, but when has that become such a bad thing for running backs?  Nick Saban knows this is a business and his guys are going to play in the league, so he takes care of them. Alvin Kamara, albeit he transferred from the Tide to Tennessee and never played for Saban, had very minimal usage coming into the NFL.  Jacobs will likely be picked on Thursday rather than Friday, but in my opinion, he’s an Oakland Raider either way. He will be a 3-down back in the NFL in 2019 and you should draft him accordingly. I apologize to the Crowell and Warren truthers.

I have seen many people freaking out over Josh Jacobs 40 time and I want to remind you to relax. Combine/Pro Day results should send you back to the tape. And the tape says that Josh Jacobs has some elite traits.

First of all, he is a great receiver… pic.twitter.com/gFWo442Lgt

Arguably the most underrated receiver in the draft, San Francisco reportedly has their sights set on taking either aforementioned former Gamecock, or N’Keal Harry with the 36th overall selection.  Since I believe Harry is a surefire first-round selection, Samuel is the guy. Deebo is a superb route runner and is extremely dangerous in the red zone because of it. He’s not a big guy, as he measures in at under 6 feet tall, but he attacks the football in the air and possesses “running back ability with the ball in his hands” according to his NFL Combine profile.  He also took back four kick returns for touchdowns during his college career. Deebo is going to be a sneaky late-first/early-second round back in rookie drafts, and I wouldn’t be surprised if he is the biggest steal of rookie drafts.

Remember my Drew Lock write-up?  Well, although I should’ve forced my own hand and mocked Jones in the first round even though he doesn’t belong, here we are.  In all likelihood, Jones will be selected on Thursday night and whoever takes him is likely going to be very disappointed. I haven’t been impressed by anything I’ve seen on tape, and I watched him stink it up live against subpar competition in his bowl game.  It could be his surroundings holding him back, but he’s just not a first rounder to me. He would serve as a nice project for former Rams QB coach now first-year Bengals head coach Zac Taylor, but I’m hearing he’s a possibility for the Giants. Just like the case with Drew Lock, don’t reach for Jones in your superflex drafts.  Just trade that first round pick for an established QB2 or take Deebo.

My apologies for this one, Jesse James owners/hype train conductors.  Even after signing James to a two-year deal, the Lions depth chart at tight end is pretty miserable.  James has had flashes here and there, but he’s not TE1 material and that showed with Vance McDonald in Pittsburgh last year.  In step’s the guy who took OJ Howard’s starting role at Alabama, Irv Smith Jr. Smith Jr. is my number three tight end in 2019.  Although he is smaller than my liking (6’2” 242), his combine testing showed good footwork and is known to be a sufficient lead blocker on running downs.  Irv Smith Jr. should finally get the dirty Eric Ebron taste out of Lions’ fans’ mouths. Based on this landing spot, Smith Jr. is a mid-to-late second round pick in rookie drafts.

"Irv's a really good player…He does all phases of what we do well. He's a good receiver, he's a good blocker. He's got really good hands and he's fast enough to be a threat down the field"- Nick Saban pic.twitter.com/1nsfj3hBj2

I really like Will Grier even though he’s not a Baker Mayfield/Kyler Murray/Patrick Mahomes type of Big-12 name.  He’s got that ‘it factor’ that can be said about Baker Mayfield. There are concerns about his arm strength and gunslinger mentality, but he did complete 67% of his passes in his final season at West Virginia.  I think this is a great pick for Washington to let Grier maybe develop for a half season or so. They want to pound the rock with Guice and Peterson, and giving Grier a long-term target in AJ Brown would do him very well.  I don’t love the ceiling at all, but he could be a useful bye-week fill in at quarterback.

This pick is so Dolphins it hurts.  Having already three burners in the receiver room (Stills, Wilson, Grant), why not just pepper in a little Parris Campbell, who led the combine with a 4.31 40-yard time.  Campbell is absolutely dangerous on screen plays and will make a living with the ball in his hands at the next level. He belongs on a team that will stretch the field, and I think the Dolphins will be doing that in 2019.  With Ryan Fitzpatrick presumably at the helm for a rebuilding Miami team in 2019, there are going to be a lot of targets to go around. There would just be questions about the long-term quarterback outlook. This is a pretty good spot for Campbell, but I would worry about consistency.

RIP to David Montgomery’s fantasy outlook.  This is an absolute nightmare scenario, I had to do it.  I’m not sold on Minnesota going into 2019 with Mike Boone and Ameer Abdullah backing up Dalvin Cook, I’m just not.  Montgomery provides a similar skill set as Cook but barring injury, it’s not going to be enough for fantasy relevance.  This landing spot drops Montgomery from the early-to-mid first, to the late-first/early-second.

I really wish Isabella would have flown under the radar, but here I am mocking him in the second round.  Isabella isn’t tall, at all. He stands a tad under 5’9” but he’s a burner. He also has the ability to play outside, as well as thrive in the slot.  Isabella would step in as a slot-replacement for JuJu Smith-Schuster and eat up a ton of targets that were supposedly going to Donte Moncrief and/or James Washington.  This landing spot makes Isabella an instant WR3 with WR2 upside and a late-first round rookie draft selection. This is about as ideal as it gets.

Contrary to lazy analysis, he’s much more than a slot WR that should be drafted by the Patriots. 💥

This is just too good to be true.  Lamar Miller is quickly approaching 30 years old.  Alfred Blue is out of town. D’Onta Foreman’s long-term outlook isn’t the most promising coming back from a torn Achilles.  In steps Miles Sanders. Sanders is arguably my favorite runner in the draft. He doesn’t have a ton of miles (pun not intended) on the odometer with 276 carries in college altogether, but there are concerns about ball security.  Remember when Nyheim Hines nearly fumbled himself off an NFL roster in the preseason? It’s fixable. Sanders to this landing spot makes him the RB3 of the class. You’ll find out why shortly.

Admittedly, I don’t know a ton about Sternberger but I know he’s not a finished product.  He’s got massive hands, coming in at 9 ¾ inches. Will he come in and have the same type of target share that Gronk commanded?  No. Will he be the same player as Gronk? No. Don’t overdraft Sternberger. But someone will. And when they do that, go get yourself a share of James White and laugh all the way to the bank.  Sternberger is a late-second/third-round rookie selection.

After just missing out on Dallas Goedert in 2018, the Cowboys still have a need at tight end.  I know, they brought back Jason Witten. Neat. But long-term, I don’t think Blake Jarwin is the play.  Geoff Swaim bolted for Jacksonville, where TJ Hockenson is going to take his job and Jason Witten is like 40.  There’s a need here. That said, I don’t think Knox produces much his rookie season, but after learning for a year under Hall of Fame broadcaster Witten, Knox could be a nice option for 2020.  Grab him in the late third.

Admittedly, this is probably too late for JJAW.  He’s one of my favorite receivers in the draft. His ability to play above the rim is probably the best in class.  He is no slouch in the speed category either, having scored a 4.49 at the Stanford pro day. Garret Price said JJAW could be “his guy” in this draft, but not if I have anything to say about it.  He will step into the vacated Mike Williams role and will be the heir to the throne should Keenan Allen ever leave Los Angeles. I’m spending a mid-to-late first on Arcega-Whiteside with future Hall of Famer Philip Rivers throwing him the ball.

As tweeted earlier, I think JJAW is going to be “my guy” in this class. There are so many things that he does better than people realize. Starting with the most obvious, JJAW is an great red zone target 🎯 pic.twitter.com/J7RRhIIU07

There’s a lot to like about Emanuel Hall.  He measured in at 6’2”, 200 pounds at the Combine and proceeded to run a 4.39 40.  That said, imagine a guy with great straight-line speed with Pat Mahomes throwing him the ball.  Sound familiar? With Tyreek Hill’s future in limbo, I believe Kansas City will draft multiple receivers because, after Watkins, it’s a barren wasteland.  Hall would step in and produce immediately in arguably the league’s highest-powered offense. He will easily be worth a first round pick landing here.

Damien Williams truthers, shield your eyes.  This may be a little early for Kansas City to take a running back given their defensive needs and having already drafted a wide receiver above, but it’s too good to pass up.  Henderson is an explosive runner who shouldered a huge load for the Memphis Tigers the last couple seasons. The strength of competition is a question mark but any running back drafted by Kansas City will skyrocket up draft boards.  If this comes to fruition, Henderson will likely be taken first overall in a lot of leagues. I would probably trade out of the 1.01 to someone who is losing their mind about the KC landing spot and get maximum value.