Finding the next James Robinson

James Robinson was an undrafted rookie that saved many seasons in 2020. Which rookie running backs could follow in his shoes in 2021? 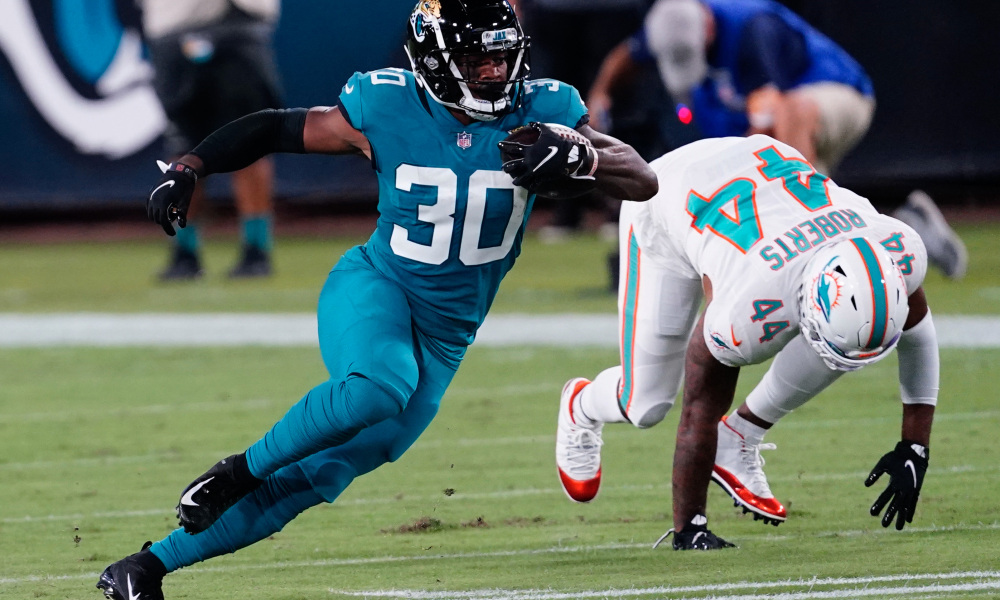 For those zero RB truthers out there, salvation in 2020 came in the form of Jacksonville running back James Robinson. An undrafted free agent for the Jaguars, Robinson was the perfect fusion of talent and opportunity. He was buried on the Jaguars’ depth chart and an afterthought in rookie drafts, if he was drafted at all.

But prior to the season Leonard Fournette was released. Then Ryquell Armstead and Devine Ozigbo ended up on the COVID list and, all of a sudden, Robinson was the last man standing. He played in 14 games, starting them all. He carried the ball 240 times, rushing for 1,070 yards and seven TDs, seeing 60 targets for 49 receptions, 344 yards and three more TDs. All that was good enough for him to finish as RB7.

Robinson isn’t the first back to break big in the NFL and for fantasy owners despite lacking a pedigree. In 2018, Phillip Lindsay joined the Broncos as an undrafted free agent. Despite the presence of veteran Devontae Booker and rookie Royce Freeman who started the season ahead of him on the depth chart, Lindsay ended up leading the group. He earned a Pro Bowl slot by carrying the ball 192 times for 1,037 yards and nine TDs, seeing 47 targets that led to 35 receptions for 241 yards and a TD. That helped him finish as RB13, giving a boost to fantasy players who found him on waivers.

So, as we head into the 2021 season, what backs have the potential to make that kind of return? Let’s look at a few rookie options with potential to surprise this season.

Doaks was taken in the seventh round by the Miami Dolphins out of the University of Cincinnati. He rushed for 1,712 yards and 14 TDs, and is currently going as RB80, about 310 overall. That means he’s going at the end of drafts or, in many cases, undrafted. He’s a potential pick up to end rookie drafts or snag on the Waiver Wire.

What gives him appeal is the competition. The Dolphins were a team rumored to select a running back high in the draft, but it didn’t happen. Instead, Doaks joins a group that includes second year back Salvon Ahmed and free agent Malcolm Brown, with a unit led by Myles Gaskin. Gaskin finished with 584 yards rushing and three TDs in 10 games, seven starts. He also added 41 receptions for 388 yards and two TDs. He could be in line for a great RB2 season, but that’s not a lock. Hence the potential for Doaks, who enters the year in a group without a defined starter or pecking order.

Best Guess: I see why Doaks is a trendy sleeper, and with one or two injuries, he could rise to the top. But I believe in Gaskin, and as long as he stays on the field I think he’s the lead dog with Ahmed and Brown providing depth and support.

Hawkins went undrafted out of Louisville. In three years, he rushed for 2,355 yards and 16 TDs, that includes 825 yards and seven TDs in eight games in 2020 after going for 1,525 yards and nine TDs in 2019. Another appeal of the selection is going to Atlanta, whose backfield is a work in progress while new head coach Arthur Smith led a run-first offense in Tennessee. That optimism has him sitting at an ADP of RB60 currently.

Last year the Falcons were paced by Todd Gurley, Ito Smith and Brian Hill, none of whom are on the roster currently. The best returning player is Qadree Ollison, who rushed for three yards on one carry in 2020. The team also signed veteran Mike Davis, who filled in for Christian McCaffrey in Carolina in 2020. Davis played in 15 games, starting 12, and carried 165 times for 642 yards and six TDs. He also saw 70 targets, catching 59 passes for 373 yards and two TDs. That was good enough to finish as RB12 in 2020, giving him the potential to carry the backfield for Atlanta.

Best Guess: Of the rookies on this list, Hawkins is the one I think has the best chance. That being said, Davis was solid for Carolina and, if healthy, seems capable of leading this backfield and doing well. In the end, Hawkins might be little more than a complimentary piece.

Jefferson was a back that some, including me, were high on heading into the draft. But he slid to nearly the end of the draft, going in the seventh round at pick No. 257. In three years at Oregon State, he rushed for 2,923 yards and 27 TDs. Now, he’s going with an ADP of RB116, meaning mostly undrafted, or at the tail end of rookie drafts. There was some reason for optimism as the Lions released Kerryon Johnson recently, removing some potential competition.

But not all the competition. The Lions are led by D’Andre Swift, who was phenomenal as a rookie. Despite splitting time and appearing in just 13 games, he rushed for 521 yards and eight TDs. He also caught 46 passes for 357 yards and two TDs. That was good enough to finish as RB18. The Lions also added to the backfield, signing former Packer Jamaal Williams this off-season. In four seasons, he rushed for 1,985 yards and 10 TDs, catching 122 passes for 961 yards and eight TDs. Both figure to have a substantial role, and that’s before even considering the Lions’ recent interest in veteran Todd Gurley.

Best Guess: I think Swift is a phenomenal talent and Williams is a capable contributor. It also wouldn’t be surprising to see the Lions add another body to the backfield, all of that creates serious obstacles to Jefferson grabbing a meaningful role. His best shot in 2021 might be vulturing goal line carries barring an injury to Swift or Williams.

This one is about history and opportunity. The 49ers under Kyle Shanahan have had strong rushing attacks no matter who has led the way. Sometimes it’s been veterans like Tevin Coleman, and other times it’s been relative unknowns like Raheem Mostert and Jeff Wilson. If you’re on the depth chart, you’ve got a shot at putting up some good production.

Mitchell was a prospect that popped for some heading into the draft. The Louisiana product rushed for 3,267 yards and 41 TDs in four seasons. He was snagged in the Sixth Round, at pick No. 194 by the 49ers, and is now going as RB67 in drafts. It’s a good landing spot, but he wasn’t even the first back drafted in 2021.

That first back taken was Ohio State running back Trey Sermon, who went in the third round. He rushed for 870 yards and four TDs in 2020 with Ohio State after adding more than 2,000 yards in three seasons for Oklahoma. He’s been a trendy first round pick in rookie drafts, going as RB47 so far in drafts. The 49ers also have Mostert, who finished as RB26 in 2019 and added 521 yards rushing and two TDs on just 104 carries in eight games in 2020. The injury to Jeff Wilson opens up more of a path for Mitchell, but it’s hardly a clear path.

Best Guess: Could Mitchell be the 2021 Lindsay? He could. But more likely Mostert is the starter Week 1 and Sermon emerges as a strong addition to the backfield and the future leader of the attack. Mitchell could still end up having a role, but I’m not sold he surpasses either Mostert or Sermon.

Matthew Fox is a die-hard football fan and Broncos’ homer. He’s a member of the FSWA. You can find more from him on Twitter @knighthawk7734 or as co-host of the Fantasy Football Roundtable Podcast.