Five Guys: Wide Receivers with the Most Riding on Draft Day

Find out which wide receivers have the most to win/lose in the 2021 NFL Draft with @ethanAwyatt. 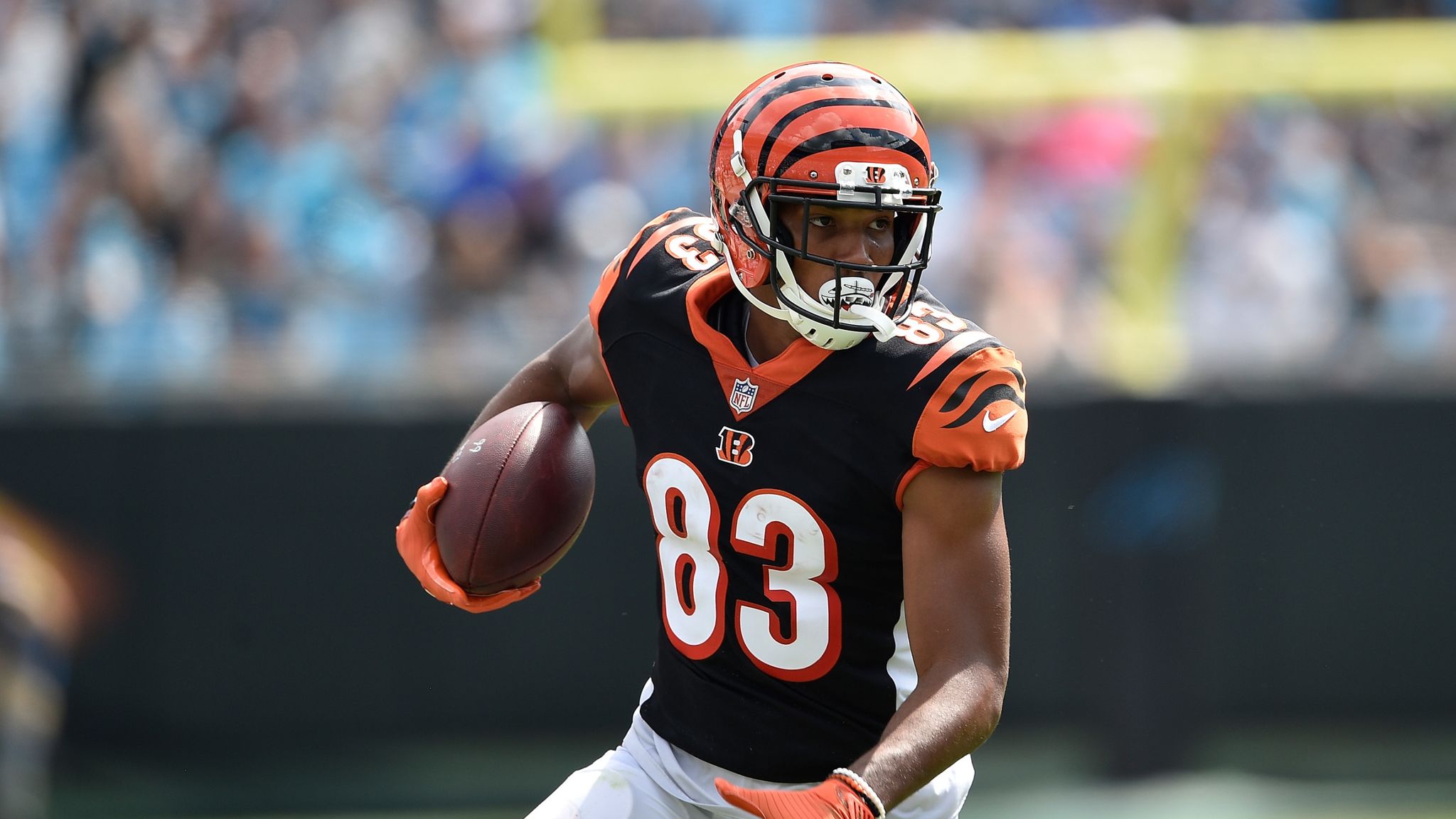 Now, onto the third and final part of the Five Guys’ series. I’ll discuss which wide receivers have the most to win/lose in the 2021 NFL Draft. Without further delay, let’s dive in!

Last year was an interesting one for New York Giants WR Darius Slayton. Before the 2020 season, some expected Slayton to take a significant step forward (me included). He had incremental improvement, but far from what people thought it would be.

That was evident in his end-of-year statistics, too. In his rookie year in 2019, Slayton had 48 receptions, leading to 740 receiving yards and 8 TDs. In his sophomore campaign, he had only two more receptions and 11 more receiving yards. However, he finished with five fewer TDs.

While his performance was admirable, it didn’t get the job done for the Giants. At various points in the 2020 season, other Giants’ wide receivers were injured. Among those were Sterling Shepherd and Golden Tate missed four games apiece. Oh, and RB Saquon Barkley also missed 14 games due to injury. So, an opportunity arose for Slayton to take advantage of. Yet, he put forth a lackluster performance.

We’ve already seen the Giants look to add to the wide receiver room. They just signed WR Kenny Golladay to a four-year, $72 million deal. They also added WRs John Ross III and Dante Pettis. With the 2021 NFL Draft right around the corner, there are also rumors that they’re looking to once again add to the position.

Slayton has already taken a big hit this offseason with the addition of Golladay, Ross, and Pettis. The latter two won’t be taking a lot of work or snaps away from Slayton, but Golladay will. If WRs DeVonta Smith or Jaylen Waddle fall to the Giants at 11th overall and they select one of them, it will be a gigantic hit to Slayton’s value.

Right now, I would look to sell Slayton as I believe the Giants will add a WR early in the draft. Whether that’s in round one, two, or three is yet to be determined. However, I do expect it to happen. I’d aim to acquire a mid-level second-round rookie pick or a young wide receiver like Bryan Edwards of the Las Vegas Raiders.

WR Denzel Mims of the New York Jets showed incredible promise in his rookie year. Despite missing seven games, Mims posted 23 receptions and 357 receiving yards. However, he failed to get in the endzone. While the stat line is far from glamorous, he had to deal with Adam Case as head coach and Sam Darnold at quarterback.

That brings us to the key departures and additions to the roster in the offseason. After WR Breshad Perriman’s departure to the Detroit Lions, the Jets went out and signed WR Corey Davis to a three-year, $37.5 million deal. Now, it’s expected that the Jets will take a look at wide receiver with the 23rd overall pick. They could also look at a wide receiver with their 34th overall pick.

With the addition and money paid to Davis, it’s clear he’ll get the first chance to be the number one option for the Jets. As it stands now, Mims will be the number two option slightly above WR Jamison Crowder. With a young, unproven rookie quarterback, that’s already not an advantageous position. If the Jets were to turn around and draft a wide receiver this year, it would ding Mims value quite a bit.

Short-term, Mims value is already in the tank. A rookie quarterback will be entering the fold, which is never suitable for wide receivers when it comes to fantasy. Long-term, I like where Mims stands. He’ll have the chance to learn and develop alongside the teams’ quarterback of the future. However, that could change on draft day.

I would hold onto Mims. You won’t get the value in return worthwhile to make a move. Plus, the Jets have to draft a wide receiver for his value to dip. It’s just as likely they focus on other needs during the draft. Regardless, it’s something you need to keep your eyes on.

Honestly, we don’t need to discuss Cincinnati Bengals WR Tyler Boyd’s 2020 season. He only got to play a handful of games with the teams’ number one quarterback as Joe Burrow went down with a season-ending knee injury in week ten. In those ten games, Boyd had 69 receptions, 710 receiving yards, and three TDs. Essentially, Boyd did what he’s done for his entire career with Burrow.

Over the offseason, though, the Bengals suffered the loss of WR A.J. Green as he’s now on the Arizona Cardinals. At this point, they haven’t made added any other wide receivers to the roster, which means that Boyd and WR Tee Higgins are the top two options for Burrow. However, that could all change Thursday night when the Bengals are on the clock with the fifth overall pick.

Many draft analysts have mocked two players to the Bengals at five. One of those is LSU standout, WR Ja’Marr Chase. Boyd has the most to win/lose as any of these wide receivers because he can be a solid WR2 for fantasy with Green gone as a second option behind Higgins.

However, if the Bengals were to draft Chase or a different wide receiver in round two, Boyd would be put on the backburner as Higgins, and the newcomer would take precedence. That’s what makes this such an intriguing storyline to watch throughout days one and two of the 2021 NFL Draft. If I were a betting man, I would bet that the Bengals draft a wide receiver in the first two rounds of the draft. Thus, I would be selling Boyd immediately.

Take the gamble Thursday night and wait for the Bengals to skip over Chase, which I expect will happen. Then, move Boyd that night or the following day before the beginning of round two. Right now, you could easily get a mid-first round rookie-pick for Boyd, and that’s what I would aim to get.

The Indianapolis Colts haven’t made any new additions to the wide receiver room thus far in the offseason. That means that WR T.Y. Hilton’s role with newly minted QB Carson Wentz is safe. For the first time since the retirement of QB Andrew Luck, Hilton will have a quarterback that loves to throw the deep ball and does it accurately.

It’s beneficial for Hilton, and with WR Michael Pittman Jr., he won’t be drawing the best coverage defender from opponents’ next season. However, that could change quickly if the Colts add to the position in the 2021 NFL Draft.

Regardless, I expect Hilton’s value to remain the same next season. He’ll be a significant deep threat for Wentz and be a boom-or-bust fantasy play week after week. If the Colts draft a wide receiver early, Hilton’s future will be up in the air. Thus, you want to keep him if you’re a contending team. However, I would squeeze whatever value you could out of him in a trade if you’re not expecting to compete next season. It will be tricky to find a suitor, but I’d expect to receive at least a third-round pick.

Boy, oh boy, I may have some people come after me for this one, and that’s alright. WR Mike Williams of the Los Angeles Chargers hasn’t accomplished much in his short NFL career. At least when you compare what he’s done to the expectations given to him as a prospect.

After topping 1,000 receiving yards in 2019, Williams dropped to 756 receiving yards on one less catch with rookie QB Justin Herbert. His TDs did increase from two to five, though. Regardless, the season became a disappointment for fantasy.

No additions have been made to the Chargers roster in the wide receiver room, which may lead you to believe that the Chargers might select one in the upcoming draft. That’s what’s being tossed around in draft circles right now as well. One of the wide receivers they’re reportedly interested in is Jaylen Waddle.

The addition of Waddle would knock Williams down a peg. Waddle would become the deep threat over Williams and subject him to a life of being the Chargers red zone target.

Any wide receiver, not just Waddle, would signal trouble for Williams with the Chargers. He’ll be playing 2021 on his fifth-year option and be up for a contract after the season.

If the Chargers draft a wide receiver in the first three rounds, it would spoil their plans and tip their hands. Meaning, they probably aren’t planning to bring Williams back after 2021. I would sell Williams now as I expect the Chargers to go wide receiver early.

A prime candidate to trade for is Philadelphia Eagles TE Dallas Goedert if you need tight end help. I would even be willing to throw in a third-round rookie pick to get it done. First, try to trade just Williams for Goedert, then offer to add the third.