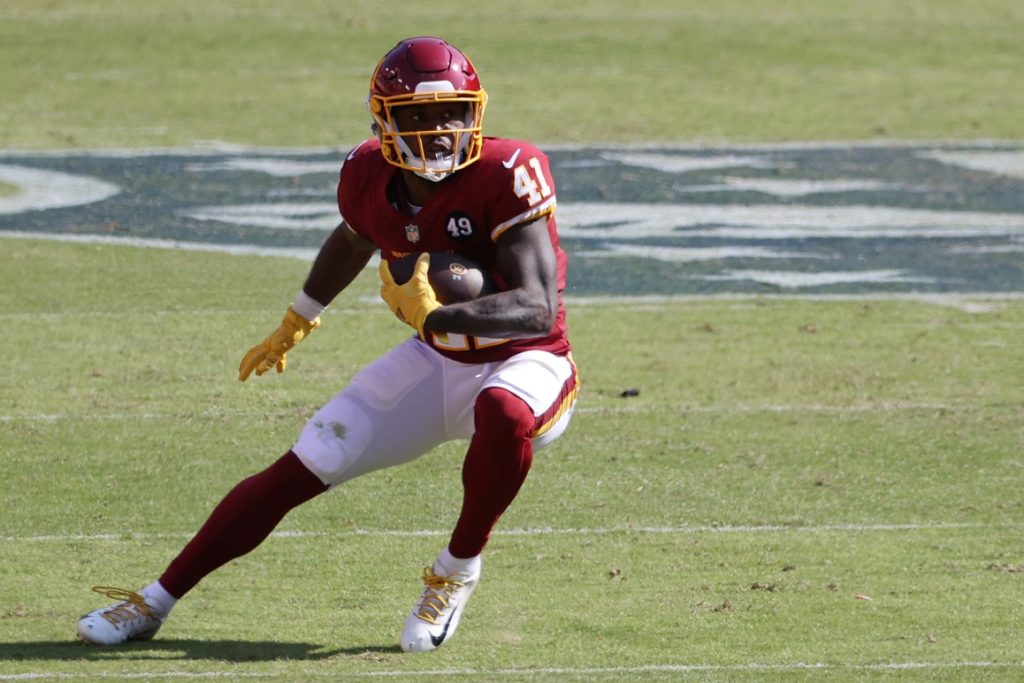 In week six’s flex-start/sit column, the only successful start recommendation I had was RB James White as he finished the day with just under 15 fantasy points in PPR scoring formats. On the other hand, RB Chase Edmonds and WR Jerry Jeudy didn’t have good games. When it comes to my sit suggestions, RB’s Jerick McKinnon and Mark Ingram both had disappointing days as they failed to top five points apiece. In Ingram’s defense, he did come down with an ankle sprain last week that caused him to miss most of the game. Now, let’s get into this week’s flex starts/sits.

There are games where you can play New Orleans Saints backup RB Latavius Murray, and this week is one of those games. The Saints will lineup across from the Carolina Panthers in week seven. The same Panthers team that is giving up 24.5 fantasy points to opposing RBs, per Fantasy Pros. That’s the fifth-most in the NFL. Murray is worth flex consideration this week.

For most of the season, Washington Football Team RB J.D. McKissic has performed well as far as fantasy is concerned due to his pass-catching ability. He is consistently overlooked as a flex option week in-week out because of fellow RB Antonio Gibson. That is understandable as Gibson has looked good and performed admirably so far this season as Washington’s starter. However, McKissic is getting quite a bit of work out of the backfield. He’s received six or more targets in the past three weeks and has finished with six or more receptions in those games. McKissic also received a season-high eight carries in week six. He will provide a safe floor for your lineup this week, like has the past three.

Jacksonville Jaguars WR Laviska Shenault Jr. has flown under the radar for a large part of the season. While his numbers aren’t eye-popping, he’s performed admirably up to this point. In the past four weeks, Shenault has received at least six targets, catching five or more of those targets three times. He’s getting a steady amount of work and has some rushing upside as well. The Jaguars should be down by a lot to the Los Angeles Chargers for most of the game. Thus, Shenault will have another outing where he sees a fair amount of targets. He will provide you a safe floor and give you some nice upside if he can break off a long catch/run.

The matchup for Arizona Cardinals WR Christian Kirk is a great one this week. The Cardinals will play their division foe, the Seattle Seahawks. A Seahawks team that is bleeding points to the WR position. While all that sounds fine and dandy, don’t stat Kirk. He’s a low volume player that’s the third WR on a team featuring DeAndre Hopkins. He’s only had more than three receptions once. Last week, Kirk lit up the Cowboys and had over 80 yards and two TDs. Before that, he had no TDs on the season and hadn’t topped 80 yards receiving. Yes, the Seahawks defense is terrible, but it isn’t as bad as the Cowboys defense. Leave Kirk on your bench. He has a high chance of disappointing you.

I know a lot of you are hurting for RB’s to play this week, and I understand the temptation of thrown Detroit Lions RB Adrain Peterson into your lineup. However, I sincerely ask you not to do so. The Lions returned from their bye-week last week and made it a point to get rookie RB D’Andre Swift the ball. Swift torched the opposing defense, while Peterson looked slow and sluggish. Granted, he had 15 carries but only had 40 yards. The TD got saved his fantasy day, and that’s what you’ll be hoping for yet again when the Lions suit up and face the Atlanta Falcons. That TD production is hard to predict, so, from here on out, Peterson needs to be on your bench unless you have no other options to pivot to.

There is no more confusing backfield in the NFL than the New England Patriots backfield. In week four, before the teams impromptu COVID19 enforced bye-week, RB Damien Harris looked to be the guy in that backfield. He was just activated off short-term IR and given 17 carries that accumulated 100 yards rushing. Then, out of the blue, in week six, Harris only received six carries. It was an abysmal showing by the Patriots offense that left us with more questions than answers. Now, they have the San Francisco 49ers on the docket, and, to be honest, I’m sitting almost all my Patriots skill position players. I have no idea what this backfield will look like, outside of White being the pass-catching option. The receivers aren’t playing well at all, either. All-in-all, leave your Patriots payers on the bench until we can figure out what n the heck is going on in New England.