Flexy and I Know It: Start/Sit Week 11

Hot off the heels of his worst week yet, @ethanAwyatt looks to rebound with his flex starts/sits in week 11. (He can’t do much worse.) 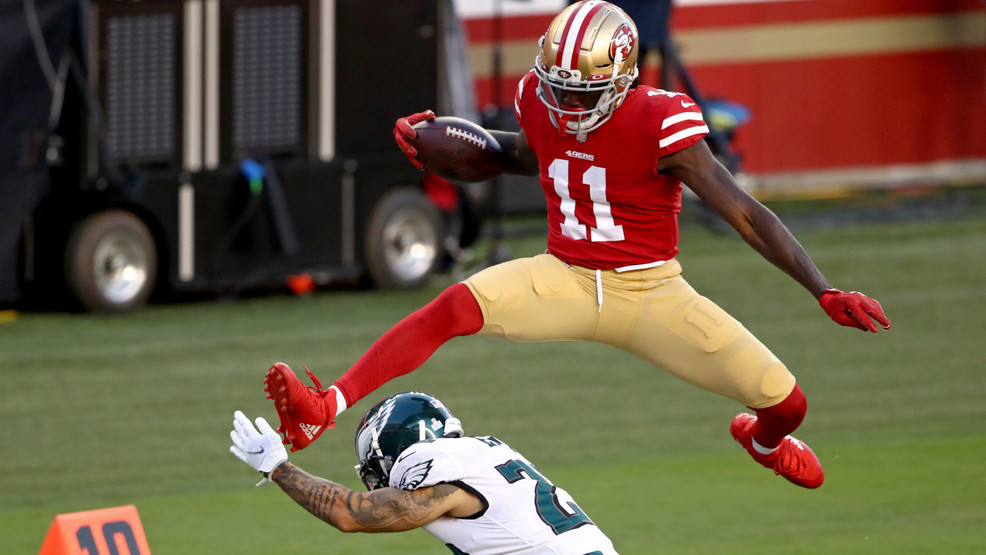 Welp. Can we just move on? We don’t need to discuss my calls from week ten.

In all seriousness, I had a pitiful week last week as every call I made was wrong.

WR Van Jefferson of the Los Angeles Rams and Atlanta Falcons RB/WR Cordarrelle Patterson were starts in my column and significant disappointments. Albeit their reasons couldn’t be more different.

Jefferson, along with the Rams offense, struggled with bouts of ineptitude all night. QB Matthew Stafford had his worst game as a Ram with inaccurate passes and turnovers aplenty. However, Stafford wasn’t the sole reason Jefferson struggled as he dropped a few passes that could’ve made this miss a hit.

While his team struggled mightily, Patterson didn’t disappoint because of that. He let fantasy owners down because of an injury he sustained in the first half.

He stayed on the field after spraining his ankle but wasn’t near as effective as he has been this season.

In a week were my starters laid duds, both of my sit calls finished with multiple touchdowns.

I hated betting against my favorite rookie from the 2020 class in Philadelphia Eagles, WR Devonta Smith, but I felt it was necessary. The Eagles played a Broncos defense riding high off a dismantling of the Dallas Cowboys.

Nevertheless, Smith overcame all the obstacles and was one of the best WRs in week ten with over 60 receiving yards and two touchdowns.

My other sit call, Washington Football Team RB Antonio Gibson, had just over 60 rushing yards and two touchdowns on 24 rushing attempts. Hats off to Gibson as he did it against a top-five rushing defense in the NFL.

Cleveland Browns RB D’Ernest Johnson is good at football. In two games without fellow RB’s Knick Chubb and Kareem Hunt this year, he has 41 carries for 245 rushing yards and a touchdown with eight receptions and 65 receiving yards.

As we enter week 11, Johnson and the Browns face off against the Detroit Lions, and their 30th ranked rushing defense. It can’t get much better for the Cleveland running game than that.

It’s not set in stone that Chubb returns off the COVID-19 reserve list this week. It was reported early there’s still a chance for it to happen, but that’s all that’s been said. Meanwhile, Hunt is still on the injured reserve list and won’t play in week 11.

There’s still a genuine chance Johnson is the lone back available again this week. Even if he isn’t, Johnson needs to be played.

The Browns are likely to run the football a heavy amount against this weak defensive unit and with a beat-up quarterback in Baker Mayfield under center. I expect Johnson to have an RB2 week or better whether or not Chubb suits up.

In his first game back from injury, Cowboys WR Michael Gallup returned to an excellent little role.

He had five targets and three receptions for 42 receiving yards in a game where the Cowboys dominated from the jump. Heck, Fox quit broadcasting the game in some areas at halftime because the beatdown was so vicious.

It’s safe to say I don’t expect that this week as the Cowboys play the Kansas City Chiefs.

The Chiefs’ defense ranks in the bottom half of the league in rush yards and pass yards allowed per game. Because of that, I anticipate this game to be very high-scoring. Oh, and it seems Chiefs QB Patrick Mahomes and the rest of the offense has figured out their recent woes.

That makes Gallup very intriguing for fantasy. His five targets were third on the team, and I expect more work coming his way. Players like TE Dalton Schultz and WR Amari Cooper will cede targets to Gallup.

I expect that to happen this week as Gallup returns WR3 value for you.

There hasn’t been a more disappointing player in fantasy this year than Chicago Bears WR Allen Robinson.

Since rookie QB Justin Fields took over for QB Andy Dalton, Robinsons’ targets have dropped mightily. In the first three games of the season with Dalton, he had 21 targets compared to the 29 targets in the six games since Fields’ takeover.

Not to mention that Robinson has only had more than 60 receiving yards twice in Fields’ six games under center.

There’s not much that you can say other than Robinson deserves to ride your bench. With a sizeable six-game sample, it’s clear he’s not his quarterbacks’ favorite target. That distinction goes to Mooney.

Unfortunately, this isn’t a trend I see changing this week or for the rest of the season. Sit Robinson on your bench, even in a favorable matchup like he has this week.

While San Francisco 49ers WR Brandon Aiyuk has earned some redemption of late, it’s not enough for you to consider playing him. At least not yet.

I think Aiyuk is starting to get his feet under him again, and his 19 targets the past three weeks seem to agree with me.

It’s the highest number of targets he’s had in a three-game stretch this season.

So, while some positive trends are developing, it’s not time for him to be in start consideration, especially in a game that will be a blowout from the jump between the 49ers and Jacksonville Jaguars.

Just know that it’s okay to reinstate some hope for Aiyuk.