Flexy and I Know It: Start/Sit Week 12

@ethanAwyatt brings you more start/sit advice in week 12, fresh off a mediocre week 11. 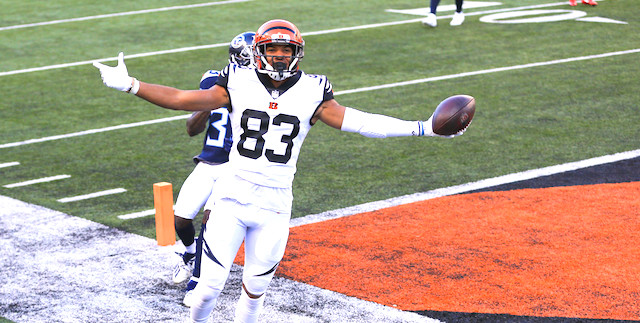 I went from atrocious to mediocre in week 11. I went precisely 50/50 on my start sit calls last week.

The start call that hit for me is Dallas Cowboys WR Michael Gallup. In week 11, Gallup caught five passes that turned into 44 receiving yards. It netted 9.9 fantasy points in PPR leagues.

Cleveland Browns RB D’Ernest Johnson had an incredibly disappointing effort in week 11 versus the Detroit Lions. Despite the Browns being without RB Kareem Hunt again, he wasn’t able to capitalize. Johnson finished with 26 rushing yards on five carries.

Unfortunately, the successful sit call for me was Chicago Bears WR Allen Robinson solely because he didn’t suit up. So, he didn’t play in your lineups unless you just didn’t pay attention.

The sit suggestion that backfired on me was San Francisco 49ers WR Brandon Aiyuk. He had over 100 receiving yards and a touchdown in the 49ers’ victory over the Jacksonville Jaguars. Aiyuk has been catching fire recently and may finally deserve some flex consideration this year.

There isn’t much of a history to go off when making this call. Hell, Odell Beckham Jr. just joined the Los Angeles Rams just over two weeks ago.

Instead, this calls’ based more on what’s around him. Objectively, fellow Rams WR Van Jefferson has been playing poorly. He has a catch rate below 60% on the season.

Before the injury to WR Robert Woods, the Rams made the move for Beckham to replace Jefferson. The idea wasn’t for Beckham to fill in or take over Woods’ role.

With that in mind, I think Beckham takes the field this week rejuvenated and returns to a semblance of fantasy relevancy. He only needs one play to have fantasy success.

Like they did in his first game, he appeared for them, I expect the Rams to design and create plays for Beckham. He’ll get around five targets this week, and that’s a good formula for him to succeed.

Since Baltimore Ravens RB Latavius Murray suffered an injury a few weeks back, Freeman has put a stranglehold on this running back room.

He’s had double-digit carries and at least three targets in the past three games for the Ravens. Freeman’s also had two total touchdowns in that period.

If you’re curious how efficient he’s been with that workload, he’s averaging 4.1 yards per carry and 5.2 yards per reception. The efficiency isn’t stellar but is far from being bad.

On top of that, the matchup is a positive one. Cleveland has only surrendered 101.4 rushing yards per game on the year, which is the eighth-best across the league.

However, they’ve surrendered an average of 145.7 rushing yards per contest in the past three games. That’s the third-worst during that stretch.

With a healthy Lamar Jackson at quarterback for the Ravens, Freeman and crew can rip apart the Browns defense on the ground.

Meh. That’s the one and the only word you can use to describe Seattle Seahawks RB Alex Collins’s performance thus far this year.

Since week four, when he started receiving double-digit carries, he’s averaged a measly 3.8 yards per carry. It’s worth noting, in those seven games, he only has eight targets to go with the rushing work.

With the Seahawks offense being as stagnant as it is, you must avoid Collins as he won’t get in the endzone. It’s also likely he won’t get more than 15 carries as he’s had just ten the past three games.

Collins also faces the seventh-ranked rush defense in the NFL. Avoid playing Collins and find another option. It’s not worth the risk.

A side effect of Cincinnati Bengals WR Ja’Marr Chases’ arrival has been the demise of WR Tyler Boyd. Unfortunately, Boyd’s on pace to have his worst season since his second year in the league.

On the docket, this week for Boyd and the Bengals are the Pittsburgh Steelers. In his career versus the Steelers, Boyd has averaged less than four receptions and 45 receiving yards.

He only has four touchdowns in the nine games against them, including the game they played earlier in the season.

If you play Boyd in week 12 against the Steelers, you’re hoping he gets a touchdown to save his fantasy day. If he doesn’t get that, you’ll be disappointing. Looking at the past games he’s played against them, Boyd has less than a 50% chance of getting that touchdown.