Deciding where to take a risk on WRs in 2020? Let the data find value for you. Here’s a breakdown of the WR trends to expect this fall. 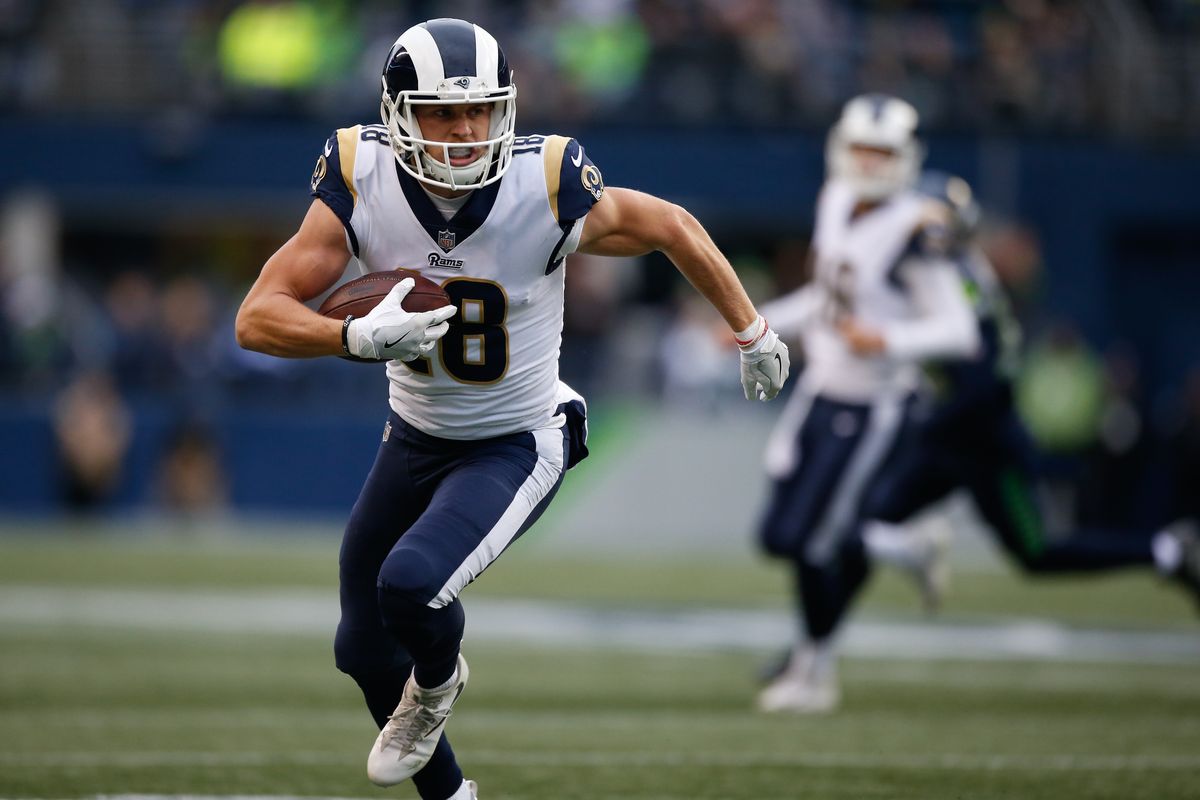 Projection models are one of the hottest tools in the fantasy market. Many fantasy networks and analysis use them to give a base of what we can expect from a player in the upcoming year. A couple of weeks ago, I showed the results for my running back based model in 2019 and it’s upcoming projections for 2020. You can find it here.

This will be my first year in building a wide receiver projection model so I don’t have the track record I do for running backs. However, a similar method was used with predictive variables based on the last four years of year-to-year data. Multiple linear regression was then applied to the heaviest correlated stats and data binning for other significant categories.

Let’s take a look at the building blocks for the wide receiver model.

We are most interested in variables that have a direct and strong correlation to following year fantasy points. Some have linear correlation such as yards per game and target share. Others have thresholds such as age, outlier touchdown rates, and air yard differential per game. There are many variables at play, so I’ll break down each stat used and its relevant category.

Phase 3: Yards and Touchdowns Per Game

We made it. Over 20 variables meshed together weighted according to year-to-year predictability. Note the model is dependent on quality and depth of quarterback targets, so as starting quarterbacks change for teams throughout the off season, I’ll be updating their projections accordingly. The same goes for vacated targets and target shares depending on where free agent WRs land.

Now that we have a feel for how the model performs, let’s start looking to 2020.

For our 2020 projections, I’ll use the combination of model projections, expert consensus rankings (ECR) from FantasyPros, and the Dynasty Nerds rankings to breakdown the top values and highest risk players among the top-40 ECR WRs. Model PPG, rank, and expert rankings (ECR) are all listed below:

Now there are a few projections that we can tell right away are likely inaccurate (looking at you Juju). His numbers were so low from poor QB play that it skewed his results more than usual, but let’s go through some of the biggest takeaways. There are certainly some more abnormalities to be wary of such as the Vikings’ wide receivers being ranked so low.

Kupp started the season as hot as anyone with multiple 100+ yard games. He was Goff’s safety blanket over and over. With Cooks and Woods on the outside, Kupp dominated the slot and was able to capitalize with reasonable yards after the catch. Robert Woods also stands out as an 11 point value. All of this leaves Brandin Cooks on the outside looking in for targets. Jared Goff saw his average throw depth plummet by over a yard from 2018 to 2019. If the lack of confidence to go deep continues considering Goff had one of the poorer deep balls in the league, expect Kupp and Woods to continue their surge. His WR5 model ranking and WR16 Nerds ranking mark him as a nice BUY candidate especially for contending teams.

A.J. Green seems likely to return under the franchise tag, but we don’t know for sure if he’ll continue to not play or if he’ll jump right back into his old self. The model assumes that he is either gone in 2020 or has a diminished role. The result appears to be a massive breakout season coming for Boyd.

His 9.3 targets per game in 2019 were among elite company and his yards after the catch per game was equally impressive. He scored far lower than expected for his use, so if the offense as a whole can step up, we should see those numbers rise. He did a lot of his work underneath with an aDOT of only 7.5 which was one of the lowest in the league. He’s extremely QB situation and Green dependent, but there is a strong case for him to make a massive jump this year. The model and Nerds ranking are in agreement that he is sitting at a nice value currently.

Anyone who follows me on Twitter knows my affinity for Gallup.

That per-game performance is extremely promising for future production. He’s in a high powered offense and scored above average in most predictive metrics, which when combined together it scores him nicely going forward. Cooper is the better receiver as a player but injuries have slowed him down. Gallup is very likely flying under the radar from a fantasy perspective.

With the reigning offensive rookie of the year slinging him passes all year long and a firm plant on the WR1 role alongside aging legend Larry Fitzgerald, what’s there not to like about Kirk this year? He is due for some positive touchdown regression based on his receptions and yards last year so we know where his floor is even without scoring as often as the average bear (or bird in this case).

The Cardinals are successfully transitioning to the air raid offense that they envisioned which should continue to help spark their receiving numbers. This is also a fuzzy wide receiver situation besides Kirk. It is very likely Fitzgerald’s last hurrah, Isabella could hardly get onto the field, and Hakeem Butler will be back but with lots of question marks. Bet on the sure thing in Kirk and sleep sound at night.

My favorite player in the league shows up as one of the higher risks in this model. Excuse me as I wipe away my tears while writing this…

This is assuming he stays in Dallas, but Cooper is going nine spots sooner than projected in redraft leagues, a good gauge for his current value. This is equally due to the rise of Gallup as it is the boom/bust nature of Cooper. Granted that he did fight through injuries last season, his targets per game were one of the lowest for a top-18 projected WR. High target volume creates a safe floor, and while he was still plenty productive, his lack of targets makes his floor scary low.

Many people thought that his roller-coaster production would subside once in Dallas but we got more of the same. Too good to bench while simultaneously single-handedly winning or losing you your matchup, the fantasy love and hate is overwhelming. The model likes his yards per target and completion percentage but dislikes his targets per game and WOPR relative to his 2020 expectations.

Great player, absolutely unsustainable touchdown rates. There’s a reason fantasy analysts harp so much on touchdown regression. Players on the extreme ends come back down to earth nearly every time. No receiver with more than 50 targets came even close to his rate of touchdowns. Know that he’ll need a sizable target increase to offset the likely drop in scoring.

Having Matthew Stafford back will no doubt be a perk for Golladay, and I used his average throw depth in the model which is even a strong positive for him. He also showed a respected air yard differential which bodes well for translating into production with more accurate deep balls. But again, he will need the increased volume to offset the expected scoring drop. Otherwise, the risk outweighs the rewards as a model rank of WR19 and a Nerds ranking at WR18 both agree he’s valued too high right now at a 2020 ECR of WR9. Could make for a nice SELL candidate.

Parker had a wonderful resurgence to his career. Tannehill provided the spark and he took full advantage. However, both my model and his Nerds ranking are far lower. When we look closer, we see how much of a difference there was with and without teammate Preston Williams in the picture.

As you know, Williams will be back in 2020. The Dolphins are expected to add a high profile running back and quarterback either through the draft or the pool of free agents. With question marks surrounding the dependability of the Dolphin’s very high passing rate and Williams outperforming him in shared games, it is best to steer clear for this year.

Most every dynasty player is in a love affair with A.J. Brown. He was sensational in 2019 and immediately vaulted himself to WR1 status in the Titan’s reborn offense. However, the model sees some significant red flags in the following:

Yes, he will likely see a nice uptick in targets from 2019. But will it be enough to offset the other two red flags? Already ranked at WR14 is plenty high for me considering the risks. This savage model suggests he won’t live up to the hype, crushing all of our hopes and dreams. Good thing it’s just a model and we already know he’s a tremendous asset as shown by his long term Nerds ranking, just temper your expectations for 2020 is all and don’t let the hype get the best of you.

If your player isn’t in the ECR top-40 and you would like to know where he ranked, hit me up on twitter and I’ll be happy to show you where he landed. Keep in mind that anyone expected to score fewer than 6.0 PPG is excluded from my top-70 wide receiver rankings.

Thanks for reading and stay golden! If you like what you learned, follow me @DavidZach16 for more interesting stats and analysis throughout the year.