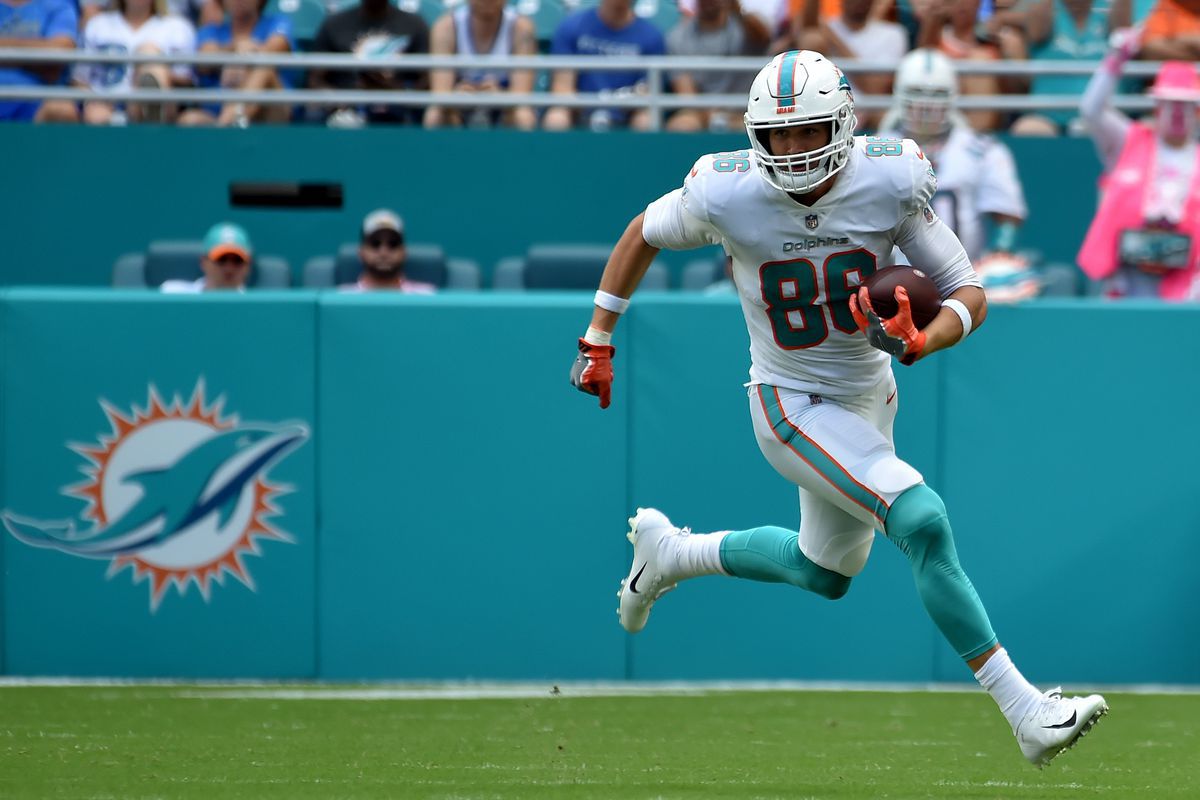 We in the dynasty community have become a “what have you done for me lately” bunch. Owners simply do not have the patience to wait on a prospect to develop and mature. This is a mistake on so many levels, especially when dealing with the TE position. Tight End is one of the most challenging for players to transition from one level to the next. These young men are half WR and half OL so they need to have time for their bodies to develop. One TE who seemed to have a difficult time with this transition was Mike Gesicki. The sophomore playmaker from Penn State underwent a disappointing rookie campaign in Miami to the tune of 22/202/0. One positive would be that according to Pro Football Focus the rookie caught all 22 of the catchable passes thrown his way. Despite these underwhelming numbers Gesicki still possesses massive upside under a new coaching regime. I believe he is a screaming value for your dynasty squads for a number of reasons. Without further ado let us take an in-depth look at this forgotten freak.

There are very few athletes in the NFL with the raw physical capabilities of Mike Gesicki. The former Penn State Nittany Lion came to Happy Valley after being named the 2013 New Jersey High-School player of the year in football. He was also a dynamic athlete in both Basketball and Volleyball. Gesicki possesses rare explosion for a man of his size. He was well known for laying it down in slam dunk contests with his former college teammates as you can see in the video below.

Gesicki parlayed his unique athletic gifts into an impressive college career. Throughout his time at Penn State, he broke the school record for both catches and yards by a TE with 129 catches for 1,481 yards. He also proved to be a dangerous red-zone threat with 15 TDs. Following his senior season, Mike Gesecki virtually blew up the NFL combine. Very few athletes are as physically gifted as Gesecki and his gifts were on full display in Indianapolis as you can see from his combine chart below.

His combine numbers alone vaulted Gesicki up draft boards across the league. He was eventually taken with the 10th pick of the 2nd round by the Miami Dolphins. During his rookie campaign,  mercurial head coach Adam Gase seemed confused about how to best utilize his rookie playmaker forcing him to block far more often than he should have. The young TE struggled in the blocking game and lacked consistency as the team spiraled into chaos. As the saying goes, NFL stands for “Not For Long”, and true to form Miami fired Gase leading to the next chapter of Gesecki’s career.

Following the firing of Gase, the Dolphins front office raided the pantry of the perennial division Champion Patriots and hired Brian Flores to be their next head coach. Being from a Defensive background Flores chose to bring along other members of the Patriots coaching tree to cover the offensive side of the ball in South Beach. Of greatest importance for Gesicki are new OC Chad O’Shea and TE Coach George Godsey. The latter coach played a large role in the Gronk/Hernandez era of patriots football. Godsey has repeatedly said that he likes to highlight players’ strengths. To that end, Hernandez was only asked to block on 4% of his snaps, far less than the 19% Gesicki did in his rookie season. With all due respect to the Miami pass catchers, the Dolphins field one of the weakest WR Corps in the league. Going forward I fully expect the new coaching staff to use Gesicki as more of an offensive weapon and less of an in-line blocker. Gesicki can act as a seam stretching security blanket for Fitzpatrick and Rosen. The Dolphins invested valuable draft capital in their TE and I look for them to see an ever-increasing return on that investment.

See all 2019 Dynasty and Rookie Rankings…

The player I see most in Mike Gesicki is a fellow freak, TE Greg Olsen. Olsen was also an early-round pick who endured a tough rookie campaign. Both players came out as more of an offensive weapon than an overall TE. Olsen was able to develop his skills to become one of the best TEs to ever play the position. I’m not saying that Gesicki is going to enjoy Olsen’s career but, he surely has the raw physical tools to follow the same path. The TE position is truly a difference-maker in fantasy. When teams have one of those upper-echelon players they possess an asset which few of their league mates can match. The price of acquiring the Dolphins TE is far less now than going into his rookie season. I would fully recommend spending a 2nd round pick and possibly a little more to add such a high upside athletic mismatch to your dynasty squad. I will leave you with his college highlight film to show you a glimpse of the things he is capable of, enjoy.