Prep for your draft by familiarizing yourself with fantasy wins above replacement analysis across various fantasy league formats. In most league settings, @statholesports has you covered. 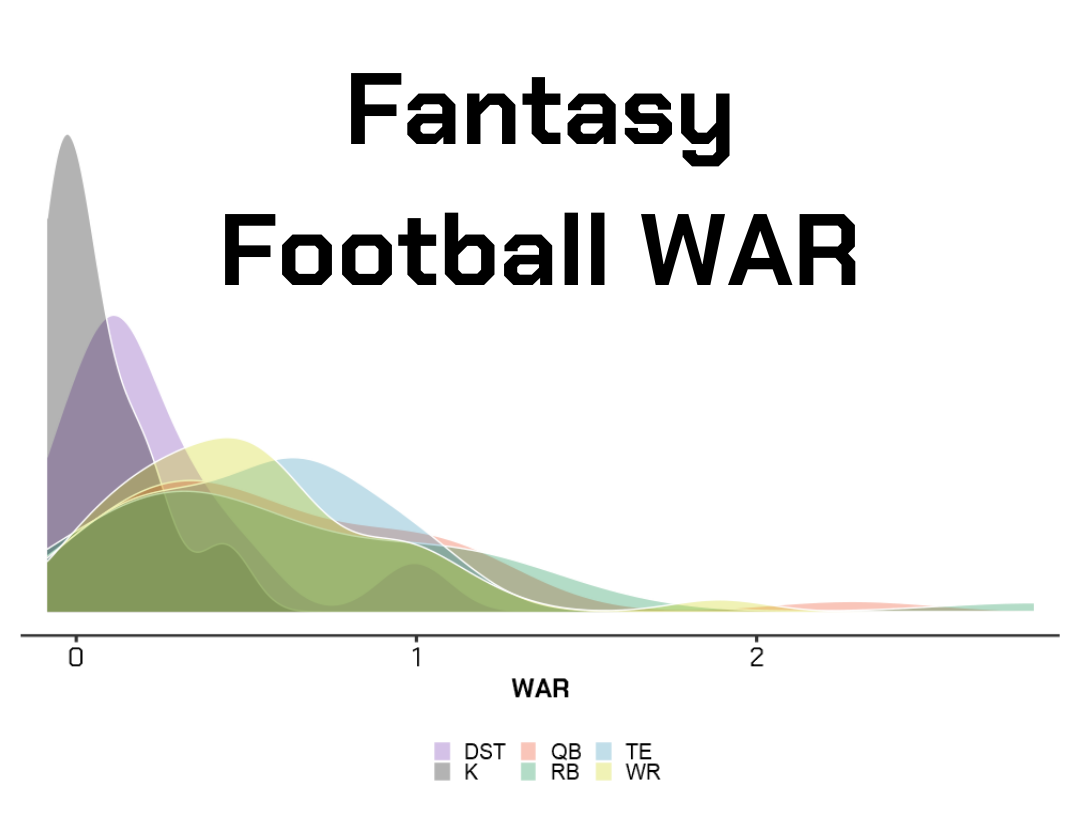 This year, I introduced a three-part series introducing the concept of fantasy football wins above replacement (WAR). The idea that you could estimate how many more fantasy wins your squad won simply due to the production of one particular player on your team was realized. All positions were graded on a standardized metric across all positions (fantasy wins). WAR allows for the evaluation of cross-positional player production, thus revealing the exact round and selection. Each player ended up being worthy of taking in the draft for any particular year.

RBs unsurprisingly rule the day in standard scoring settings. Even though PPR was designed as an attempt to equalize WRs to RBs, it hasn’t come anywhere near doing so in the last four years. The graph below demonstrates this by showing the distribution of WAR for the top-24 RBs vs. top-24 WRs from the past ten years in full PPR. The higher up the y-axis a position’s distribution rises, the more options fantasy owners had at waiting to draft the last starting-caliber player (replacement-level player) later on in their drafts. The wider a distribution on the x-axis and shorter in height on the y-axis, the scarcer the top-end WAR producers were:

You might recall 2015 being “the year of the WR.” The animated graph above reveals this was just an illusion of comparison to other years in which RB dominated. You’ll notice the production of RBs and WRs are relatively close until 2016. Ever since then, the emergence of dominant pass-catching RBs (Freeman, Gurley, Bell, CMC, etc.) has largely foiled the efficacy of many PPR formats. As far as individual performance changes across PPR formats, the graphs below compare WAR values for standard and PPR with each player listed in order of draft worthiness according to WAR:

Keep in mind that .5 PPR results for any specific player will fall somewhere in-between the standard and PPR charts above. Here are a few notable differences in the two formats above:

Another more common league setting is one with three starting WR slots. Combine this format with PPR, and the idea is that the WR position is even more valuable with the extra slot creating more scarcity of talent to pick from. Despite this format taking multiple measures to bolster the WR position, the last ten years of data still show more years than not in which RB representation is superior to WR at the top-end of the distribution and WR has more representation at the replacement-level:

Sure, 2012 and 2015 were decidedly better for WR. But we still see the trend of the last four years heavily favoring RB in the above animation. Below is a glimpse of the WAR optimal draft selection order in the past four years using this 3WR, PPR format:

Even in a 3WR, full-PPR scoring 12-team setting, the last four years saw RB take 6, 7, 6, and 5 out the top-10 respective selection spots of each year’s draft. Compare this to WR holding 3, 3, 2, and 4 top-10 spots, respectively. If a fantasy format is designed to give such bias towards a position, you’d think that position would have more representation at the distribution’s upper-end. This, however, doesn’t altogether deny the importance of WRs. After the top-10, the past four years have brought value to WRs in this 3WR-PPR over RBs who aren’t depended on as pass catchers. The big-name pass-catching RBs who occupy the top-end distribution on the animated graph above are gone by the middle to the latter part of the first round. This makes taking WRs or a top-caliber TE early the right play in this format.

I’m lumping these two league settings together. In 3WR leagues, there was never an instance in the last ten years that a non-QB ended up being worth starting over a QB in the top-24 super-flex roster spot. Here again is a five-round (top-60 player) chart of 2019 in this super-flex format of 12 teams, PPR with 3WRs:

The combination of 3WR with PPR and the addition of a second QB bring about as much positional parity to a fantasy format as practically possible. In the same way league starting RB and WR distributions were compared earlier, when all positions are brought to the fold in 2019, the distinctions between the major fantasy positions become much finer:

The only exceptions to this positional parity would be kickers and, to a lesser degree, DSTs. The tall and condensed gray and purple shades on each of these position distributions reveal what experts already knew to be true: you can wait to be the last to draft at either of these positions without much loss in positional performance.

All in all, the formats explored here should give you some indication of the positional worthiness on a year-by-year basis. No format demonstrated shying from big-name pass-catching RBs. They are worthy of a top pick in fantasy drafts, but 2QB/Super-flex PPR gave credence to a more equitable balance between the major positions. As I’ve done in past articles, I’ll reiterate that WAR does nothing to ensure you, as a fantasy owner, are set-up to pick the correct player at any given position. Still, it allows you a way of seeing what each position’s ceiling is in terms of what matters more than any other metric in fantasy football: wins.

In It To Win It: Veteran Players To Help Put Your Team Over The Top
Scouting a Wide Receiver with Some Experts