The college football regular season comes to a close this week and it is time for @FF_Hulsey to examine some of the top talent in the 2024 draft class. Here are ten breakout freshmen who you need to be targeting in devy leagues. 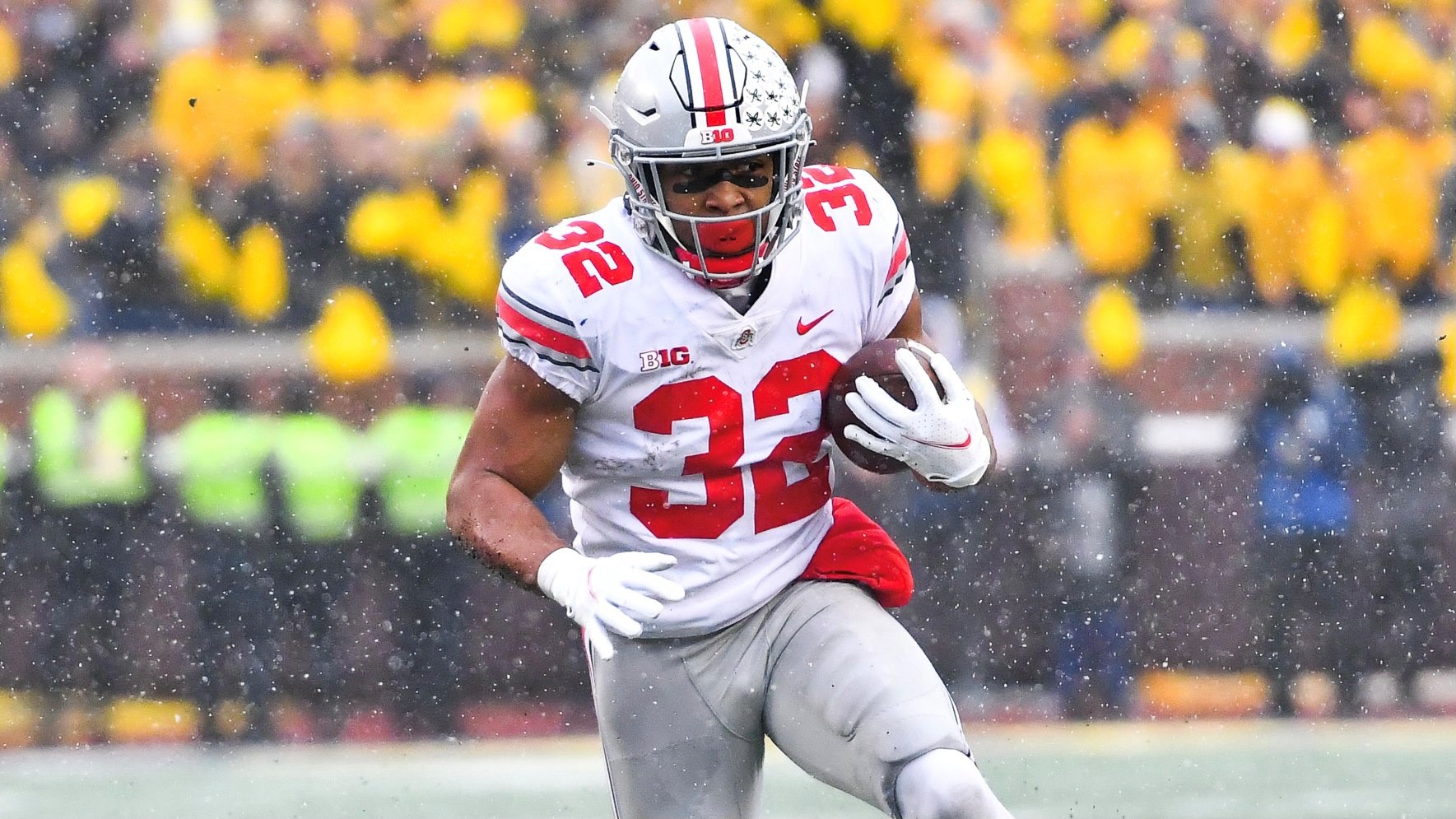 The college football regular season comes to a close this week, and it is time to examine some of the top talents in the 2024 draft class. Devy managers are finally to a point where the sample sizes of on-the-field production and film are large enough to develop some initial thoughts on this talented class. These early producers consist of blue-chip prospects as well as some lesser-known risers who everyone will be familiar with soon. Here are ten breakout freshmen in the 2024 class who you need to be targeting in devy leagues.

The new big man on campus in Norman has been shooting up devy boards all season and might be the most obvious name on this list. He threw for 1,674 yards and 18 touchdowns in just ten games while adding another six scores on the ground. He appears poised to become college football’s next superstar. Looking like a 6’1” version of Kyler Murray, Williams is a rare do-it-all quarterback with limitless NFL upside. The placement and velocity he puts on his throws, even to the intermediate-deep levels of the field, will make your jaw drop. His ability to improvise and extend a play is unmatched by any quarterback in college football.

It is yet to be seen what kind of impact Lincoln Riley’s departure will have on Williams, but we are already witnessing a mass exodus of top recruits de-committing from the program. Part of what initially made Williams such a special prospect was knowing that he would be tied to college football’s quarterback whisperer. There is now an interesting dynamic at Oklahoma as the program prepares for an uncertain transition to the SEC. Even with those factors in play, Williams is the No. 14 overall prospect and QB3 in my latest devy rankings. He is the consensus top quarterback in the 2024 class.

Dart is a former four-star recruit and wasted no time taking the starting job from Kedon Slovis this season. He has shown flashes of brilliance, with a few freshman moments sprinkled in as well. Dart has thrown for 1,162 yards and eight touchdowns in just five games this season and will look to improve those numbers against California this week. He has a natural feel for the game and impresses with his ability to extend the play.

The biggest beneficiary of Lincoln Riley accepting the job at USC has to be Dart, who is the most talented quarterback on the roster at the moment and will likely get an influx of top recruits to connect with. His career trajectory now looks much more promising, and a recent bump puts him at QB12 in my devy rankings. This assumes that Riley does not bring a transfer quarterback with him to Los Angeles (looking at you, Caleb Williams).

What a play by USC true freshman QB Jaxson Dart. Showing some of the talent that made him a @On3Recruits 5-star https://t.co/Xq4xETFJqt pic.twitter.com/yl3VGvQseX

Henderson was considered the top running back in the 2021 recruiting class, but even those high on him coming into the season were surprised by how quickly he took over the Ohio State backfield. He opened everyone’s eyes with a breakout performance in his third collegiate game in which he ran for 277 yards and three touchdowns. He has been dominating ever since. Henderson finished the regular season with 1,457 total yards, 19 touchdowns and rushed for an average of 7.0 yards per carry.

He runs as if he was just shot out of a cannon, which should not come as a surprise considering his experience as a track star. He is commonly compared to Christian McCaffrey, and it is easy to see why. Every week he showcases a rare combination of power, vision, burst, and receiving ability. He is an elite devy asset and profiles as an early first-round selection in the NFL Draft. Henderson should be treated as a top-two overall pick in devy drafts, and I would strongly consider taking him with the 1.01.

Former safety and current Wisconsin wrecking ball Braelon Allen took the Big Ten by storm during the second half of the season. There is so much to like with his profile. Starting with the fact that he is still just 17 years old and will likely enter the NFL at age 20. Allen won’t turn heads with his 40-time right now, but as you can see below, his game speed is translating just fine. Allen went on a seven-game streak in which he rushed for over 100 yards in every contest. During that stretch, he averaged 7.91 yards per carry and piled up 11 touchdowns. Against Nebraska in Week 10, Allen had 184 rushing yards after contact.

The 2024 draft class looks strong at running back, but Allen has rocketed past several highly-touted recruits. He is now RB11 in my devy rankings. AJ Dillon seems like a very conservative comparison at this point.
I look forward to tracking his development closely, especially as he learns some of the technical aspects of the position.

Braelon Allen is a FORCE! 😤

It took some time for Shipley to get going, but he was an absolute weapon for Clemson down the stretch. He is a versatile running back built for the modern game and has shown impressive speed and vision. Shipley was a five-star recruit and considered one of the best high school running back prospects in recent memory. He finished the regular season with 741 yards and ten touchdowns.

Shipley has secured his role in Clemson’s offense and should be a focal point for the Tigers in 2022. His receiving skills were not showcased nearly enough, but he is one of the most skilled pass-catching backs in the country. That needs to be a featured part of his game. Shipley is currently a top 30 overall prospect in my latest devy rankings.

If Kansas can turn their program around in the next couple of years, it will largely be due to Devin Neal. The Jayhawks were very fortunate to keep the local kid in-state, and it is already paying off with massive dividends. He might have been a bit under-recruited in high school but still received offers from Iowa, Oklahoma State, and Nebraska.

Neal has an NFL body with good acceleration, patience, and burst. This season, he produced at a high level despite being on a bad team that lacks talent on the offensive line and at the skill positions. He logged three 100+ yard rushing performances and looked very natural as a receiver.

Hunter is a player who very few expected to produce right away, especially while sharing a backfield with an elite prospect like Tank Bigsby. He was a three-star recruit coming out of Mississippi, and his only other Power 5 offer was from Iowa. The coaching staff at Auburn clearly took a liking to him right away. He wasted no time carving out a significant role in the offense. He totaled 637 yards, four touchdowns and averaged 6.9 yards per carry in the regular season.

Hunter does not have the prototypical size that some of these other backs do but displays world-class speed and strength. I was especially impressed with his 6-65-1 performance against LSU. He is a very decisive runner, hits the hole extremely hard, and has good contact balance.

There is plenty to be excited for in Austin, with Bijan Robinson and Xavier Worthy poised to be the cornerstones of the offense in 2022. Worthy was an electric playmaker all season for Texas, showing off blazing speed, great body control, and length. Regardless of who the signal-caller is next year for the Longhorns, Worthy should have improved quarterback play. He would undoubtedly benefit from more consistency out of that position. Either a quarterback currently on the roster improves and wins the job, or the Sarkisian-recruited Maalik Murphy impresses enough to start as a true freshman in 2022.

Worthy finished the season two yards shy of 1,000 receiving yards and hauled in 12 touchdowns. That kind of production from a true freshman receiver with his pedigree is a great indicator of success at the next level. The breakout age and market share will be too hard to ignore, even for folks who are hesitant to buy in due to his size. That is not a huge concern of mine currently. The NFL is evolving, the prototypical size of a wide receiver is not what it used to be, and there is still plenty of time for Worthy to add some bulk. He will be a first-round pick in devy drafts next year, and rightfully so.

Xavier Worthy is a future first-round pick — but we get him for 2+ more seasons in college 🙌🙌 pic.twitter.com/L3iXqHmfMC

One of the most impressive true freshman seasons at any position this year is coming from Brock Bowers. Tight ends simply have no business being this darn athletic. He is the TE1 in devy as far as I am concerned. Michael Mayer is in the same tier, but I see Bowers do things every week that no other tight end in the country is capable of.

Heading into the SEC Championship, Bowers has 652 receiving yards and ten touchdowns with an average of 17.6 yards per catch. By comparison, Kyle Pitts failed to post numbers like that until his junior season in a much more pass-heavy offense. Bowers has elite athleticism for a tight end and is above average as a blocker. He has a chance to build on his impressive freshman season with at least two more games against elite competition. The sky is the limit for this guy.

Bech does not have the frame nor the role to develop his skills as a blocker quite yet. I am confident that will come, though. His receiving ability and early production are what landed him on this list. He moves surprisingly well for a big man and eats up yards after the catch. He consistently shows the ability to beat his man, track the ball, and win at the catch point.

His lack of size is a bit concerning. There is still hope that he can fill out and be an Evan Engram-type of tight end. Bech finished the regular season with 489 receiving yards and three touchdowns. I think Brian Kelly taking the job at LSU only helps Bech’s stock moving forward.

We’re going to be talking about 2024 LSU TE Jack Bech a whooooolllle lot over the next couple years.

He can’t block too much yet but he’s killed it as a big slot and he stacks YAC like some type of YAC stacking machine. pic.twitter.com/MOo8DSFqO7

Visit the Dynasty Nerds Prospect Film Room today for access to a full library of game tape of your favorite college football prospects.