From Dynasty to DFS: Week 5

Back after it for Week 5’s tough slate. Is this the Million dollar week? 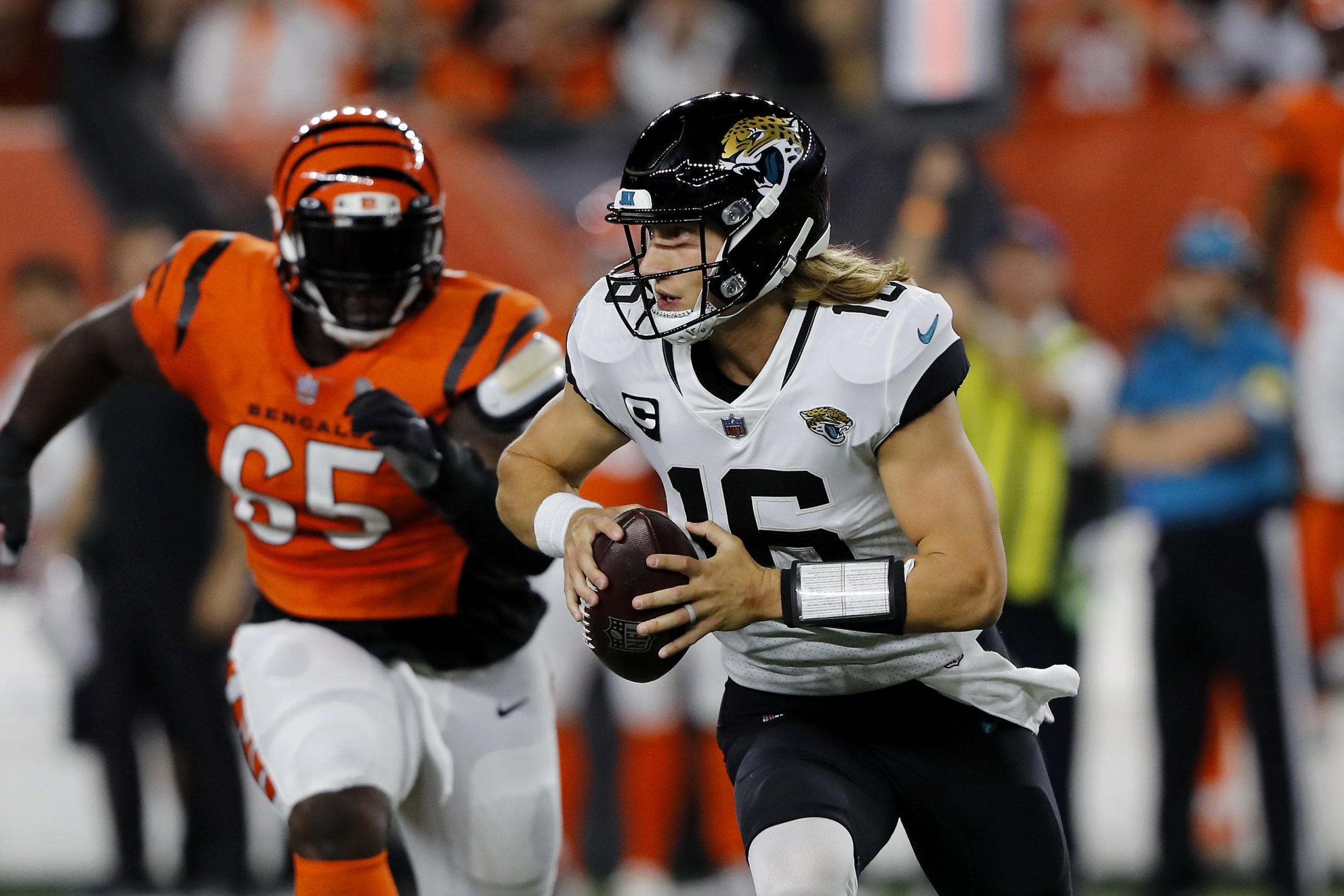 It’s getting a little tougher as the season goes on, but we’re going to continue rolling along for Week 5.

This is one that not people aren’t talking about this week but has some good stacking opportunities. Last week we saw my QB1 shred the Tennessee secondary for almost 300 yards and two touchdowns. A lot of the focus this week is on Meyer and his extracurricular activities. I think the team responds to the chaos and shocks the world for their first win of the year sending Tennessee into a tailspin.

Mitchell is back this week, and immediately going into my starting lineup. Going back to week 1 he was elevated above Sermon and looked competent averaging 5.5 yards per touch while adding a score on the ground. Peaking at the prior three games Henderson, Robinson, and Cook all carried the rock at 6 yards per carrying as well. This is a smash play for me as I expect them to limit the use of Lance’s arm in this game with plenty of zone-read and RPO’s.

Jones is playing at an elite level this season, and I don’t expect it to end anytime soon. The offense is clearly flowing through Jones as he’s average 17 carries and 4 targets per game following week 1’s clunker. The Bengals allowed James Robinson to do what he felt like on the ground last week, and I expect that trend to continue in this one. This game could also get ugly which should be a positive game script for Jones as well.

This should be the coming-out party for Viska if there’s going to be one. With Chark out of the lineup, we could see even more targets than the 7 we’ve seen Laviska get in the first four weeks. Last week we saw him also log his first 100 yards game on the season. This week I think Laviska gets the job done going over the century mark while hitting paydirt against the lowly Titan defense.

I think we’re going to see people chasing the targets of Antonio Brown from last week coupled with his low salary. In reality two of Browns’ 11 targets were coming from Brady trying to stick it Bill last week. Evans has 9 or more targets each of the last 3 weeks putting up 75 or more yards per game in that span. Miami has left plenty to be desired through the ground and the air, and I expect Brady to get his.

Jefferson has almost picked up where he left off in 2020. Jefferson has quietly been average almost 9 targets and 70 yards per game this season while scoring each of the last three weeks. Obviously, the scoring trend will come to an end at some point but I don’t see it ending against the hapless Lions. With a 10 point base, Jefferson has a solid floor this week with an untapped ceiling.

I’ll be punting this week at the position, or so it would seem. I love the play of Kmet this week only needing about 12 points to pull his weight for your lineup. Considering Mike Gesicki went off for over 100 yards, and ageless wonder Jared Cook finding paydirt off 70 yards, I look for the Raiders to continue their tight end struggles. Kmet was awared a red zone opportunity last week as well and will be a good safety blanket for QB1 Justin Fields.

Seems as though we’ve kind of lost sight of Mr. Brown and it’s easy to see why. Considering he hasn’t scored since week 1, and hasn’t broken the 50-yard threshold this season it’s easy to see why his price has fallen so far. However, he’s still the WR1 for this team and no longer needs to split the targets with Julio. Just last season we saw Brown with a 22% target share compared to 2021’s lowly 9%. With Julio out of the lineup that should open up more opportunities for Brown to get the ball in his hands in this must-win game for the Titans. If we added in Marvin Jones anywhere else it would make a lot of sense, considering this game is one my favorite stacks of the week.

Without a lot of cash left this makes the most sense for my lineup. Giants’ defense shouldn’t be considered anything special, or reliable. With all the pieces above we’re looking at fades from Henry and the Cowboys pass-catchers. The Cowboys have always had a tendency to play down to the level of their opponents. I expect this game to be closer than people think but with all the passing volume from Dak I’m really hoping for a defensive score to carry the torch!