As we get ready for week 6 @Glosser13 has you covered for your IDP leagues. 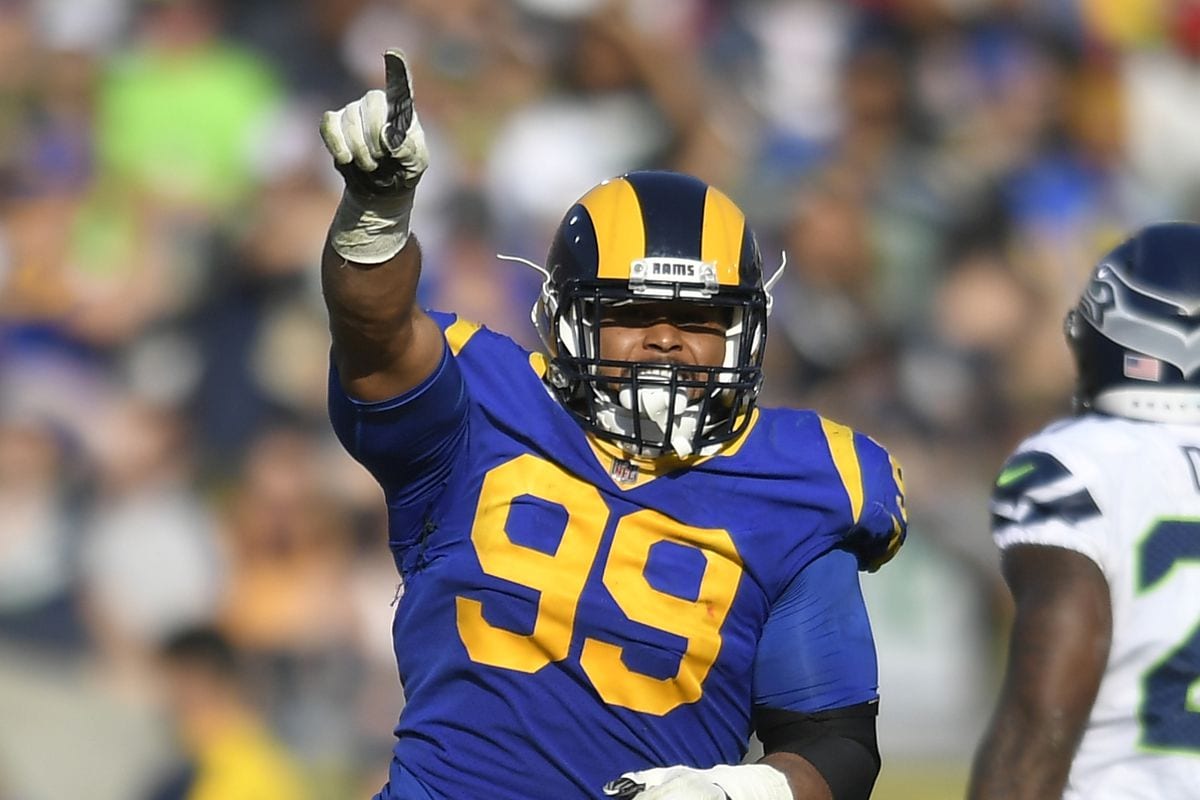 As we enter week 6, we start to get a true reading on where our teams are at and if we are contending or rebuilding. As the injuries pile up it becomes more important to make the right starts every week especially on defense. The IDP side of fantasy isn’t as cut and dry as offense so being able to lean on someone to point you in the right direction is key. Let’s go over week 5 before we jump into the week 6 players.

A decent bounce back after a rough week 4 but getting back to even par seems like a win. The hope is to continue to increase the accuracy so we can continue to help you chase those championships. Let’s dive into the week 6 slate.

Chase Winovich makes his second appearance in six weeks on the start list. The former Michigan Wolverine has 2.5 sacks and one forced fumble in his last three games. Chase Winovich has only failed to record 10 points or less once all season. Ironically enough, it was on his most snaps played in a single game this season. Winovich is starting to defy the odds in the fantasy football world and actually give managers a reliable producer every week, something we are not used to seeing.

Chase Winovich has made himself a name in the Patriots organization early in just his second year. He is second on the team in snap percentage at 65.8%. John Simon is the only New England defensive linemen with more snaps than Winovich through the first four games, although Simon has yet to record a sack. Despite only playing four games so far, Chase Winovich ranks as the DL33 in IDP123 scoring. Chase Winovich is the only player in the top 40 with less than 177 defensive snaps. The Patriots best EDGE rusher has made the most out of his opportunities this season.

The postponed game between the Patriots and Broncos scheduled for Week 5 was moved to this week after concerns with Covid-19. I like the chances for a better defensive performance from a Bill Belicheck team that has an extra week to prepare. Chase Winovich will line up across from a Denver offensive line that ranks 25th in pass protection, according to FootballOutsiders.com. The Broncos have allowed 41 sacks and an adjusted sack rate of 8.1%, which is below the league average of 7.0%. I feel confident Chase Winovich puts up another solid performance in Week 6.

The second straight week that an Indianapolis Colts linebacker not named Darius Leonard makes the list. In fairness to Leonard, the Colts LBs have made this list because it’s realistic he sits for a second straight game before heading into the bye week. Although we may disagree for fantasy purposes, it makes sense for the Colts as a team. Anthony Walker cashed in on a huge game last week with Leonard out, as did this week recommended start Bobby Okereke.

Bobby Okereke played with a cast on after suffering a broken thumb earlier this season and still put up his career-high in fantasy points with a 27.70-point week. What may come as a surprise to most, Okereke actually leads the Colts LBs in snap percentage and total snaps played at 80.2% and 243, respectively. Over the last two weeks, the Colts linebacker has 18 tackles and one interception. Okereke totaled 41 fantasy points over that time. That’s not bad for a player on waiver wires even in most dynasty leagues.

The Colts return home to host rookie quarterback Joe Burrow and the Cincinnati Bengals in Week 6. The Bengals have allowed opposing linebackers to score big on them in their last three contests. They have given up at least six tackles to that position in each contest. The addition of DeForest Buckner to the Colts defensive line has made the linebacker position a goldmine for IDP managers. I’m betting on Darius Leonard sitting out again this week and starting Bobby Okereke wherever I can.

Justin Reid is one of the most underrated young safeties in all of IDP fantasy football. Justin Reid enters Week 6 tied for fourth amongst all safeties with 29 solo tackles despite posting a below-average run defense and pass rush grade according to Pro Football Focus. The Texans safety ranks as the DB41 in IDP123 scoring but is just one single fantasy point away from being a top 36 defensive back.

Justin Reid has been as consistent as you can ask for with at least five tackles in every game. Reid tied a career-high 10 tackles in week two against the Baltimore Ravens. In games he has started and finished, Reid has not finished with lower than nine fantasy points in nine straight games. This makes him one of the safest plays for IDP managers and gives you someone to trust despite the matchup every week.

Houston will play their second game this week in the post Bill O’Brien era when they play the undefeated division rival Tennessee Titans. In Justin Reid’s last four games against the Titans, he is averaging 8.75 fantasy points per game. The Titans are coming off a dominant performance at home in Week 5 against the Buffalo Bills. In that game, the Titans allowed at least seven tackles to four different DBs. Only three DBs in the NFL have played more snaps than Justin Reid through five weeks. I’m confident another solid performance is coming this week.

The 49ers struggled in 2020 really started with the loss of Nick Bosa and Richard Sherman in week two. Many expected Arik Armstead to step up and become a difference-maker on the defensive line in the absence of Bosa. Armstead finished with over 200 fantasy points in 2019. That, unfortunately, hasn’t been the case, and it’s actually been veteran Kerry Hyder Jr. who has been the most consistent. Hyder, who I recommended as a start in week three, has yet to record a single-digit fantasy performance this season.

Arik Armstead’s struggles have him currently ranked as DL47 despite playing a team-high 71% of snaps this season. Armstead has had a roller-coaster season for IDP managers. 38 of his 47 total points have come in two games, and he has failed to eclipse five points in the other three games. There’s reason to believe the loss of Nick Bosa and DeForest Buckner has forced Armstead to see more double teams and lowered his overall effectiveness. This is a tough situation for IDP managers because, on name value and projections alone, Armstead is a player you consider starting every week despite the struggles.

The 49ers are trying to avoid a third straight loss this week against the Los Angeles Rams. The Rams offensive line has allowed the fewest sacks in the NFL at 22 with an adjusted sack rate of 3.7%, the lowest in the NFL. Arik Armstead has failed to reach his weekly projection in three of five games this season. On his current pace, Armstead is on pace for 150.4 fantasy points, which would be a 50-point difference from the 201 he posted in 2019. All the information provided point to Arik Armstead having another below-average week.

One of the things I’m typically the most skeptical of is boom weeks, specifically for linebackers. Troy Reeder defined a boom week in Week 5 with a 10 tackle and 3 sack performance. Reeder finished with an outstanding 44 fantasy points. The injury to Micah Kiser resulted in a huge boost in Reeder’s snaps, who delivered in his only significant snaps of the season.

Over the past few seasons, it’s been a one LB show for the Rams in terms of IDP production, and that has been Cory Littleton. Micah Kiser seemed to pick up that role when Littleton left in free agency. The former Virginia Cavalier was a tackle machine to start the season with 21 solo tackles prior to missing last week’s game against Washington. Troy Reeder only played 19 snaps before Week 5, recording just three total tackles. Reeder has 50 total fantasy points on the season, with 44 of them coming in last week’s game.

The Rams will face the 49ers on Sunday Night Football this week. The 49ers have allowed 36 sacks on the season, but five of those were in last week’s blowout loss to Miami. I would expect the 49ers to clean that up this week and protect whoever it is they put under center. The 49ers will try to utilize their productive rushing attack to do this. With the combination of Micah Kiser likely returning and an outlier boom week, I would not trust Troy Reeder to produce big numbers in Week 6.

This was a tough one for me this week, trying to find a defensive back that was widely owned to sit. Kevin Byard has been a monster for IDP managers over the past few seasons. Byard has finished with over 213 fantasy points in three straight seasons. In the past three games, Byard has not recorded over four tackles in a single game and has zero impact plays.

The Titans are using more three safety looks this season. Although they’ve played the least games of anyone with the Covid-19 issues, it appears this defense has lowered the floor for IDP production. The addition of Malcolm Butler has made consistent production among the Titans DBs more difficult to predict. All three of Malcolm Butler, Kenny Vaccaro, and Kevin Byard play over 90% of snaps. This is a recipe for disaster and with the ability to stream cornerbacks at the DB position. It’s easier to find hidden production on the waiver wire rather than relying on inconsistency from a player like Byard.

The Titans look to remain undefeated against the Houston Texans this week. Houston will surely test their safeties in coverage with their speed at the WR position. We will need to see more impact plays from Kevin Byard to start him consistently. Logan Ryan was the most productive DB for the Titans a season ago. It appears Malcolm Butler is stepping into that role this season, leaving Byard on the outside looking in. In this particular case, it’s important not to let name-value force you into making bad starts every week.

That will do it for this week, Nerds. I hope the informed opinions on these players will guide you in making the right lineup decisions this weekend. If there’s anything you ever need on the IDP side of things, feel free to reach out to me on Twitter @Glosser13. I’m always happy to help. Until next week keep up the grind and continue to take one step closer to grabbing that dynasty championship.

Changing the Call: Week Six
Flexy and I Know It: Flex Start/Sit Week 6