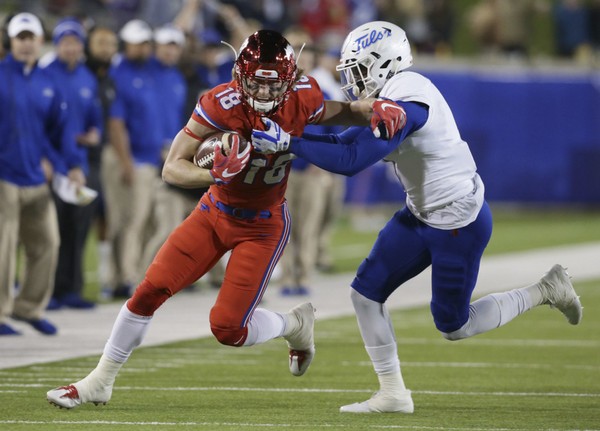 Throughout the preseason, there’s always a couple of players who start receiving an abnormally high level or praise and begin shooting up rankings. Often, it’s late round rookies who may be getting closer to a starting gig than we thought possible at an early stage.

This year, that player for me is Trey Quinn. The last couple of weeks have brought in ringing endorsements left, right, and center for Quinn. The Washington Redskins selected Quinn as Mr. Irrelevant in the 2018 draft.

The 5’11” 203-pound WR was the perfect complement to Courtland Sutton at SMU after transferring from LSU. The pair were a dynamic duo for the Mustangs. Quinn earned first-team All-American Athletic Conference on his way to 1,236 yards and 13 TDs in his senior year. A full breakdown of his college production can be seen below:

According to PFF, Quinn averaged 4.36 yards per route run, which ranked highest among all ddraft-eligibleWRs. Out of the slot, Quinn caught 75% of his targets with seven TDs and had the lowest drop rate (1.7%) in this receiver class. Despite that, no one has really remotely kept an eye on him in terms of dynasty value.  In fact, FantasyPros has him ranked as the WR29 in this class, which seems absurd.

Jay Gruden seems enamored with Quinn since he joined the team. It makes you wonder if a quick, vacuum type player like Quinn could become his new Ryan Grant. At the beginning of OTA’s, Gruden noted that Quinn is a “silent assassin” and a “QB friendly target”. Less than a week later, Gruden again publicly endorsed Mr. Irrelevant. He noted, “I’ve been very impressed with Trey. He’s learning from Jamison [Crowder], which is good, but he can also line up in different spots, so Trey is a guy that we’re going to rely on to be able to play multiple spots.”

Although not an elite athletic prospect, Quinn is certainly not a late bloomer. In high school, Quinn caught a state-record 357 passes for a national-best 6,566 and 70 touchdowns during his All-American career at Barbe High in Louisiana. He was also a very good baseball player and a two-time state finalist in the 100-meter dash. Quinn also threw a no-hitter in the opening round of the 2008 Little League World Series.

It’s not like the Washington Redskins are all that stacked at WR. He’ll have competition from Doctson, Crowder, and Richardson, but it’s worth noting that Crowder is a free agent following the season. Furthermore, Doctson and Richardson haven’t particularly thrived in the league since they entered.

With a 4th round rookie ADP or later, Quinn is as good as you’re going to get with a late round flyer. Quinn is firmly on my radar now, and he should be on yours.