Grayson McCall is One to Watch 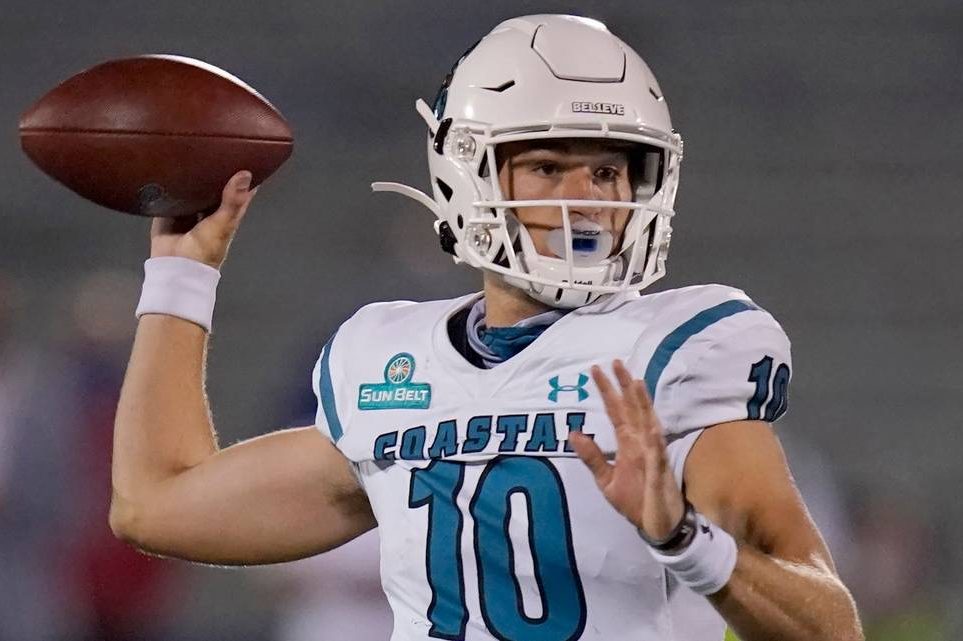 By the time you read this, “Grayson McCall” may not be as obscure a name in college football circles as it was early in the 2020 college football season. No harm if you have never heard of him. Few Chanticleers outside of Josh Norman have become household names. Further, the Chanticleers’ Week 1 upset over Kansas started at 9:00 pm and ended after midnight eastern time. But make no mistake, after three weeks of college football, McCall, a redshirt freshman, has been a pleasant surprise.

In just three games, McCall has shown some tendencies. Just, for example, the young signal-caller has an apparent affinity for the hole shot, hitting receivers behind the corner and in front of the safety in zone coverage.

McCall has also been consistently accurate in the deep and vertical passing game, while showing very good touch on these throws.

While several Group of 5 quarterbacks have had prolific college careers, it seems that the lack of requisite arm talent has prevented some of these players from succeeding at the next level. Players like Logan Woodside, Kellen Moore, and Colt Brennan all put up elite numbers in the college ranks but never made it as starting-caliber NFL quarterbacks. McCall is only a redshirt freshman, but he has shown the ability to make competent throws on long attempts to the opposite hash.

Finally, McCall is truly a dual-threat, with the ability to throw on the run or run himself as a critical portion of the Chanticleers’ read-option run game. He can make plays both on designed runs and when improvising when things do not go as planned.

McCall should already be on your radar in Campus 2 Canton formats. He has the looks of one of those Group of 5 mega producers who can win your leagues. But at 6’3, 200 pounds, McCall has the frame to add weight, and perhaps, additional arm strength and zip on his ball to be considered a legitimate NFL prospect. He is definitely one to watch in a college football season beset by delays, opt-outs, and postponements.

Follow me @sharpereview and listen to The Sharpe Review podcast.