Gus Edwards- Out of the Blue 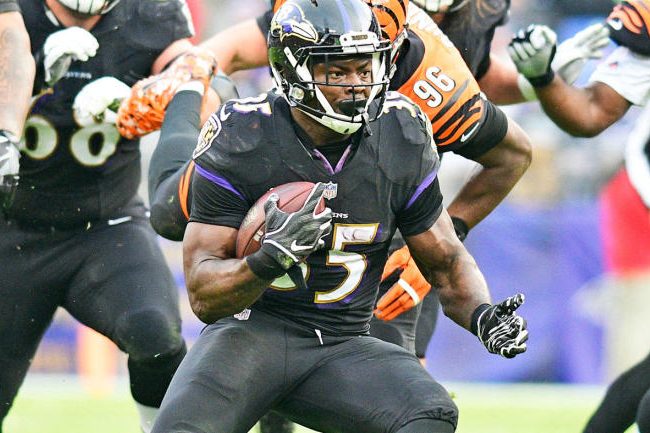 Week 11 saw a largely unexpected breakout game from Gus Edwards. The Baltimore Ravens RB unexpectedly led the Ravens in rushing and dominated Alex Collins in snaps. With the help of Lamar Miller’s read-option keeping the defense on their toes, Edwards proceeded to rush for 115 yards on 17 attempts, adding 1 TD.

It appears to be expected that Edwards will maintain his leading role over Collins. Alex Collins has the odd flash, but in general, he’s a below-par RB at best. It’s therefore not overly surprising that he could lose his job to a rookie. However, not many people would have expected it to be Gus Edwards at the beginning of the season. In fact, even now, he’s likely still available on most waiver wires.

As such, I wanted to give a bit of a background on the RB who may now be the Ravens’ starter for the remainder of the 2018 season.

The undrafted rookie out of Rutgers is a 6’1’ 238-pound back who is 23 years old. In the lead up to the draft, NFL.com’s Lance Zierlein stated, “His size and athletic scores will get him into a camp, but he lacks value on third downs and doesn’t appear to be a dynamic enough runner to land a roster spot with that talent alone.”

Having said that, he has quite an impressive athletic profile. Edwards is able to run a 4.52 40-yard dash, along with 34.5 inch vertical and 10-foot-3-inch broad jump. For his height and weight, that’s quite impressive. Furthermore, Edwards had quite a lot of experience out of the shotgun in College, preparing him for a pro-style offense.

Edwards spent the majority of his college career at Miami as a backup. After playing second fiddle to the likes of Duke Johnson and Mark Walton, Edwards moved to Rutgers for his Senior season. Whilst at Rutgers, he didn’t particularly set the world alight as he split work in the backfield with Robert Martin. You can see a breakdown of his college stats below:

I don’t think Edwards holds much long-term value despite his rise to prominence. I still believe that the Ravens will either draft a RB or sign one in free agency this offseason. Regardless, if he continues to produce for the rest of the year, you can flip him for some sort of pick…. even if it’s a 3rd rounder. It’s rare that you can pick up a potential starting running back in week 12 of a season, particularly in deeper formats. If you have waiver priority I suggest picking him up in the hope that you can flip based on a few decent games.