Don’t look now but Dan Snyder just made a quality hire. Ron Rivera will be the next head coach of the Washington Redskins. @reflipewthenuz is hear to break down the hire and dynasty ramifications for your team. 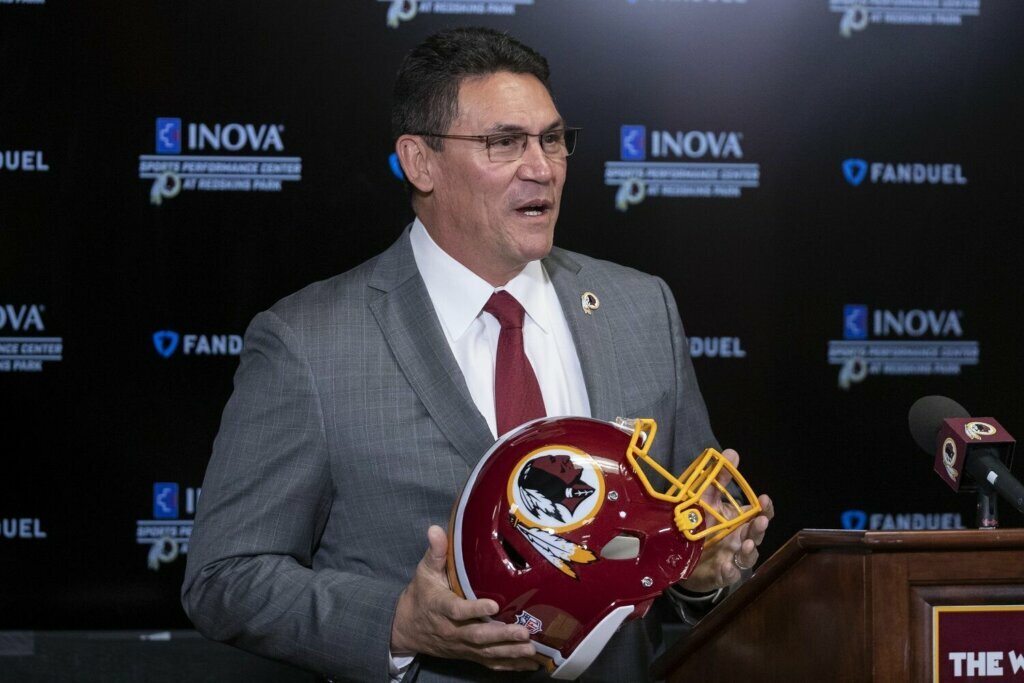 Don’t look now but the Washington Redskins may finally be making the right type of moves to change their fortunes. This was long known to be a head coaching vacancy following the dismissal of Jay Gruden earlier this year. The team made it official following the culmination of yet another disappointing season for the Washington faithful by moving on from interim coach Bill Callahan on Wednesday.

For years now the Redskins have been one of the more dysfunctional franchises in the NFL. Owner Dan Snyder has put his hands on the day to day operations of his team and not for the better. However, it seems that the dark days in D.C. may be coming to an end with one of the best possible hires that could have happened. The Washington Redskins have officially named Ron Rivera as their new head coach. Coupled with the dismissal of team president Bruce Allen this is a slam dunk hire for a franchise seeking to return to their glory days.

Ron Rivera will bring a measure of stability with him to Washington. The two time NFL coach of the year has enjoyed a high level of success in the league. He has long been considered a players coach which will help smooth over potential issues players may have with ownership following recent dust-ups with high profile players like Kirk Cousins and Trent Williams. His release has overtones of the Andy Reid ousting from Philly years ago. The son of a Puerto Rican father and Mexican mother, Ron Rivera is one of the highest-profile minority coaches in the league. As such, Washington was not required to interview anyone else before hiring their coach of choice.

For the younger dynasty players who don’t remember him, Rivera is a former player and member of the vaunted 1985 Chicago Bears Super Bowl championship team. Being a former player never hurts when it comes to attracting players. Being a former Linebacker, Rivera will naturally focus his attentions on the Redskins defense. To assist him with this Rivera has hired former Jaguars and Raiders HC Jack Del Rio to be his Defensive Coordinator. These two former linebackers bring a wealth of playing and coaching experience to the table and should bring the Redskins D back to life.

While Rivera usually focuses his attention on the defensive side of the ball he has tended to allow his OC a measure of autonomy when it comes to running that side of the team. In recent seasons Rivera has partnered with offensive guru Norv Turner. It is a fair question as to whether or not Turner would come back to work for the owner who fired him almost two decades ago. If Rivera decides to look outside the current team structure the more likely hire could be Norv’s son Scott who was also with Rivera in Carolina. The early chatter out of the nation’s capital is that current OC Kevin O’Connell will be given a legitimate shot at interviewing for the job. Whomever Rivera decides to bring in will have some interesting pieces to work with. Let us take a look at what is in the cupboard in D.C.

The Washington Redskins attempted to address their QB position last season by making Dwayne Haskins the 15th pick of the draft. He will be the future of both the franchise and the position moving forward. It will be beyond important whom Rivera and Snyder bring in to work with their franchise signal-caller. A reunion with Norv Turner or his son Scott would be beneficial for all involved. The Turner’s have made their bones by working directly with QB’s mentoring the likes of Troy Aikman, Drew Brees, Rich Gannon, Philip Rivers, and Cam Newton. As mentioned above, it has also been rumored that Washington may retain current OC Kevin O’Connell due to his relationship with the young quarterback. Haskins is a big kid with an even bigger arm. He possesses all the tools to be an effective pocket passer in this league. He is a nice developmental stash for your dynasty squads.

The Redskins have been snakebitten when it comes to the RB position over the last couple of seasons. Moving forward it would be surprising if the team brought back the ageless Adrian Peterson. The most logical path forward would be for the Redskins to move forward with a combination of Darrius Guice and Bryce Love. The talented yet injury-prone duo could provide nice depth for the incoming Rivera regime. No matter who was calling plays in Carolina during Rivera’s tenure the RB was a pivotal part of the system. Guice stands to increase in value during this offseason but I would also encourage our readers to inquire about the availability of Bryce Love. He is a similar player to Christian McCaffrey whom Rivera and Turner turned into a PPR dynamo. Love broke several CMC’s records at Stanford and could be a sneaky add in your PPR leagues.

The Redskins have the building blocks of a quality WR room. Last season the team sought to address previous mistakes by attacking the position in the middle rounds of the draft. To this end, they brought in Terry McLaurin and Kelvin Harmon. Each player had their moments in their rookie campaign with McLaurin showing immense potential being paired with his former college QB. I would not be shocked to see the team draft another WR this year as they seek to surround their young franchise signal-caller with as many weapons as possible. Rivera has typically employed OC’s who heavily target the number one option on the team. McLaurin has the makings of a dynasty WR1 and I would recommend acquiring him if at all possible.

Once looked upon as one of the strengths of the team, the TE group in D.C. will need some work moving forward. Former All-pro Jordan Reed has endured more concussions than just about any player in the league. It is fair to wonder if he has already played his last down in the NFL. The team will likely seek to move on from the ageless Vernon Davis this offseason as well. Washington will likely be a top destination for free-agent TEs like Eric Ebron and Austin Hooper. It would also not be surprising to see the Redskins dip into the rookie pool for a pass-catching TE if they strike out in free agency. Keep an eye on who locks down the starting TE job as Rivera has a long history of favoring pass-catching TEs who are consequently what we want in fantasy.

Whomever Ron Rivera decides to bring with him to D.C. to call plays on the offensive side of the ball, the Redskins have made a quality hire this time around. Unlike when the team made a young unproven Jay Gruden their choice, this time they have bought a name brand. Gruden was far from the worst coach in the league during this time in Landover but Rivera will bring a new kind of attitude with him to the nation’s capital. He has the clout to demand respect from players and ownership. He has the connections to bring together a quality staff to build on the excellent 2019 draft class as evidenced by the hiring of Del Rio. Early rumors have Rivera getting a major say in whom the team brings on as GM. With the ousting of team president Bruce Allen, I would assume the team embraces the youth movement moving forward. Rivera will likely be given a long leash in his attempt to rebuild the fortunes of this once-proud franchise. Dan Snyder has made some questionable calls in the past but this one appears to be a home-run.