Has T.Y. Hilton Ran Out of His Luck?

In this article, Noah Ulferts dives into the career of T.Y. Hilton, the NFL’s most undervalued receiver. 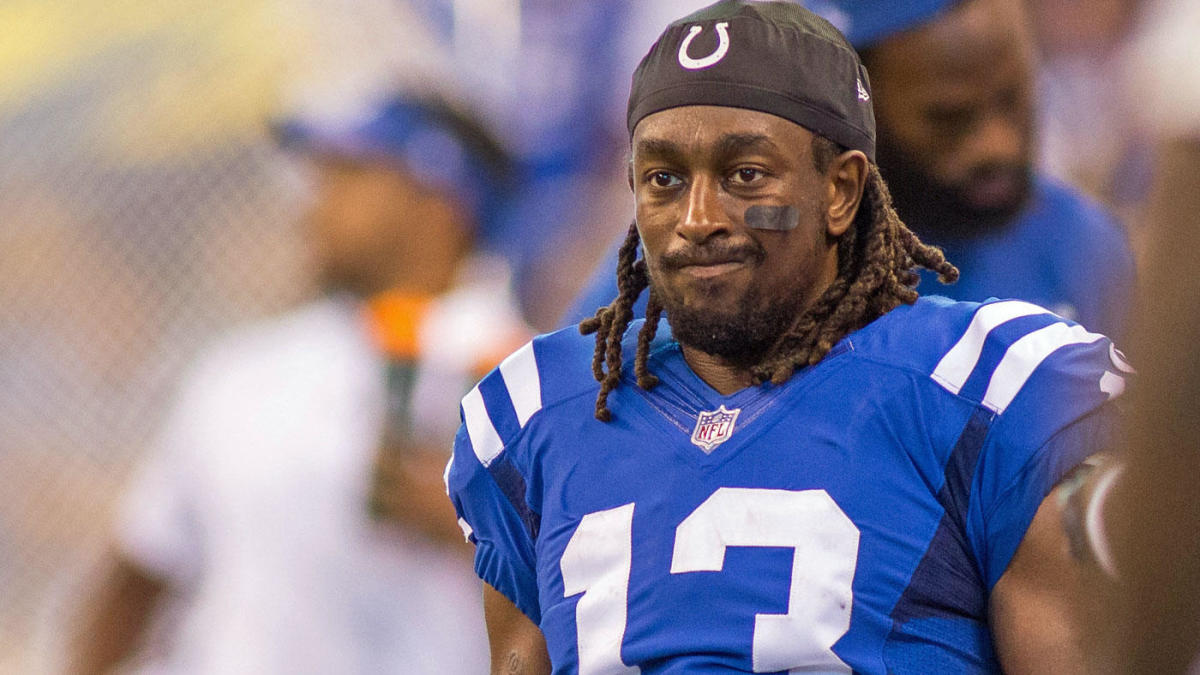 Almost all good receivers have a good quarterback throwing to them.  This rule does not apply to DeAndre Hopkins, who once caught over 1,500 yards in a season with Brian Hoyer, Ryan Mallet, TJ Yates, and Brandon Weeden throwing to him.

T.Y. Hilton unfortunately is not Hopkins and falls subject to this debilitating law.  Hilton was drafted in the third round of the 2012 Draft and fell into the luckiest position.  With the number one overall pick, the Indianapolis Colts selected their Franchise QB in Andrew Luck.  Hilton immediately built a friendly repertoire with his new quarterback beginning in rookie minicamp.

In their first year together, 2012, the duo amassed 50 catches for 861 yards and seven touchdowns.  This ranked second on the Colts to the great Reggie Wayne who caught 106 catches for 1,355 yards and five touchdowns.  Heading into his sophomore season, Hilton failed to start the first six games of this season until finally, he caught his break.  Reggie Wayne tore his ACL in week seven, handing the WR1 role over to Hilton.  T.Y. went on to make 82 catches for 1,083 yards and five touchdowns, leading his team in all three metrics.  Hilton had no plans of losing his starting position.

Furthering his progression, Hilton continued to improve in 2014 and went to his first Pro Bowl.  Luck and Hilton connected for 82 catches for 1,345 yards and seven scores.  Naturally a deep threat receiver, Hilton caught five of his seven touchdowns from beyond the 20-yard line. In the red zone, Hilton struggled to find separation, catching only 36% of the passes thrown his way. Following his second Pro Bowl campaign, Hilton took a small step back in 2015, making 69 catches for 1124 yards and five touchdowns.   This was largely due to Luck only playing the first seven games.

Hilton reached the mountain top in 2016.  Hilton and Luck combined for 91 catches for 1,448 yards and six touchdowns. He led the league in receiving yards, was third in first-down catches, and fourth in targets.  Hilton cruised his way to his third consecutive Pro Bowl appearance.

Every Up Must Come Down

The good times came to an end in the 2017 preseason, as Luck tore his labrum during the preseason.  Scrambling for a QB, the Colts’ new General Manager traded fellow starting receiver Phillip Dorsett for a third-string QB, Jacoby Brissett.  With very little time to learn the playbook, Brissett started every game under center for the 2017 season.  Brissett and the Colts floundered this season, falling to a terrible 4-12 on the season.  Hilton and Jack Doyle did everything they could in the receiving game to help the Colts reach those four wins, each accounting for 23% of the target share.  Doyle and Hilton were rewarded by being the only Colts to make the Pro Bowl in 2017.

After a forgettable season, the Colts were looking to bounce back with the return of Luck in 2018.  Other than the return of Luck, the Colts signed new head coach Frank Reich to revitalize the stale Colts team.  Hilton had another monster season despite missing two games due to injury.  He made 76 catches for 1,272 yards and six touchdowns. Despite receiving for over 1,200 yards, Hilton didn’t even crack the top ten in the NFL that season.

The End of an Era

Before the start of the 2019 season, Luck shocked the NFL world by retiring in August.  The team was once again left in the hands of Brissett.  The Colts were now suddenly entering a new era in Indianapolis, a quick rebuilding era to fit the offensive scheme of Nick Sirianni. Now a veteran player on the team, Hilton had a backup quarterback throwing to him once again for a full season.

Brissett proved serviceable throwing for over 2900 yards with 18 touchdowns and six picks.  Without trust in the quarterback, Sirianni chose to play a conservative offense, one that fails to take shots down the field to Hilton.  This style of offense resulted in Hilton’s regression of production as he only made 45 catches for 501 yards and five touchdowns. He was only able to play 10 games this season due to a calf tear in week 9.  If we extrapolate the statistics of 2019, Hilton would have made 72 catches for 801 yards and eight touchdowns.  When healthy and on the field in 2019, Hilton garnered a 24.6% target share and 24.2% in the red zone.  Hilton was very much a focal point of this offense which seemed to be a car with 4 flat tires.

The quarterback carousel of 2020 was legendary, names like Tom Brady, Philip Rivers, Cam Newton were on the open market.  With all the dust settling at the end of Free Agency, the Colts secured veteran quarterback Philip Rivers.  Hilton’s ceiling jumped through the roof, even a Rivers nearing the end of his career was a large jump above Brissett.

Finally, the Colts were able to open the playbook more.   Hilton saw the most targets in 2020 and posted a decent stat line of 56 catches for 762 yards and five touchdowns.  However, more than ever before, Hilton is finally seeing competition towards the top of the depth chart. A rookie entering his sophomore season, Michael Pittman Jr., made 40 catches for 503 yards and a touchdown after only starting eight games on the season.  Nyheim Hines also bit into Hilton’s stats, as the Colts chose to check down to running backs more than ever before. Hines pulled in 63 receptions on 76 targets for 482 yards and four scores.  After the season was over, and Rivers informed the team that he would be retiring, the Colts were found in an all too familiar spot.

Hilton entered free agency after the season and received many offers from other teams including the Baltimore Ravens. He ultimately decided to return to the Colts on a one-year deal, after the Colts traded a conditional pick for Carson Wentz.  With a franchise quarterback under center, T.Y. was finally entering a Super Bowl window towards the end of his career.

Bad luck, no pun intended, once again found the Colts, as Wentz suffered a foot injury that will keep him sidelined for 5-12 weeks.  This unfortunate event could sink the Super Bowl hopeful Colts.  The Colts are hopeful for Wentz’s speedy return, as they are planning on putting either Brett Hundley or Jacob Eason under center for the start of the 2021 season.  These backups are a step down from Brissett and drops the fantasy floors of all Colts receivers.

If Wentz returns soon after the start of the season, I could see this Colt’s receiving unit thriving.  Wentz will have a top 5 ranked offensive line and several young and speedy wide receivers.  In this scenario, Hilton will get the targets he deserves after the return.  Hilton has only had less than 90 targets once in his career, and it was due to missing six games that season.  Hilton will eat alongside the other young receivers, Zach Pascal, Pittman, and Parris Campbell.

If Wentz does not return soon, and the Colts are forced to roll Eason or Hundley onto the field for half of the season, I expect an incredibly conservative approach. The Colts will choose to run with Taylor and pass in the short to intermediate routes.  I believe this team won’t take chances downfield and Hilton will once again suffer a season similar to his 2017 season.  These backup quarterbacks could rely on their veteran WR1 but won’t push the ball push.

If the Colts are pushing an awful record heading into the second half of the season, I could see Hilton being traded to a WR needy contender.  This could immediately increase Hilton’s value if he were to be traded.  I would love to see him join the Chiefs late in the season or perhaps join the Packers before the trade deadline.  Hilton could have a positive outcome, regardless of how good the Colts are.  Buy low on Hilton if your Dynasty is in a contender season.  Hilton may be at the late stages of his career but I expect an Emmanuel Sanders-like end to his career.

Luck shaped the career of Hilton, and it is hard to imagine other quarterbacks throwing to him, even though it has been two seasons already.  I enjoy the thought of Wentz throwing 65-yard bombs to Hilton, renewing both of their currently stale careers.

Hilton has been underappreciated in fantasy over the course of his career as he has been massively consistent. He will never return to the first tier of fantasy WRs but he could help your team. Trade a box of Corn Flakes to your friend for Hilton and laugh at him later in the season, when Hilton manages to catch 65 targets for 750 yards and seven touchdowns.

Are You Hoarding Running Backs?
Dynasty Breakout players to Watch for on Each Team- AFC West Edition