How Josh Rosen Can Rebuild His NFL Career

Former No. 10 overall pick Josh Rosen has been unfairly labeled a “bust” by many despite having played for two of the worst offenses in NFL history. What will it take for the 2018 first-round pick to redeem himself? 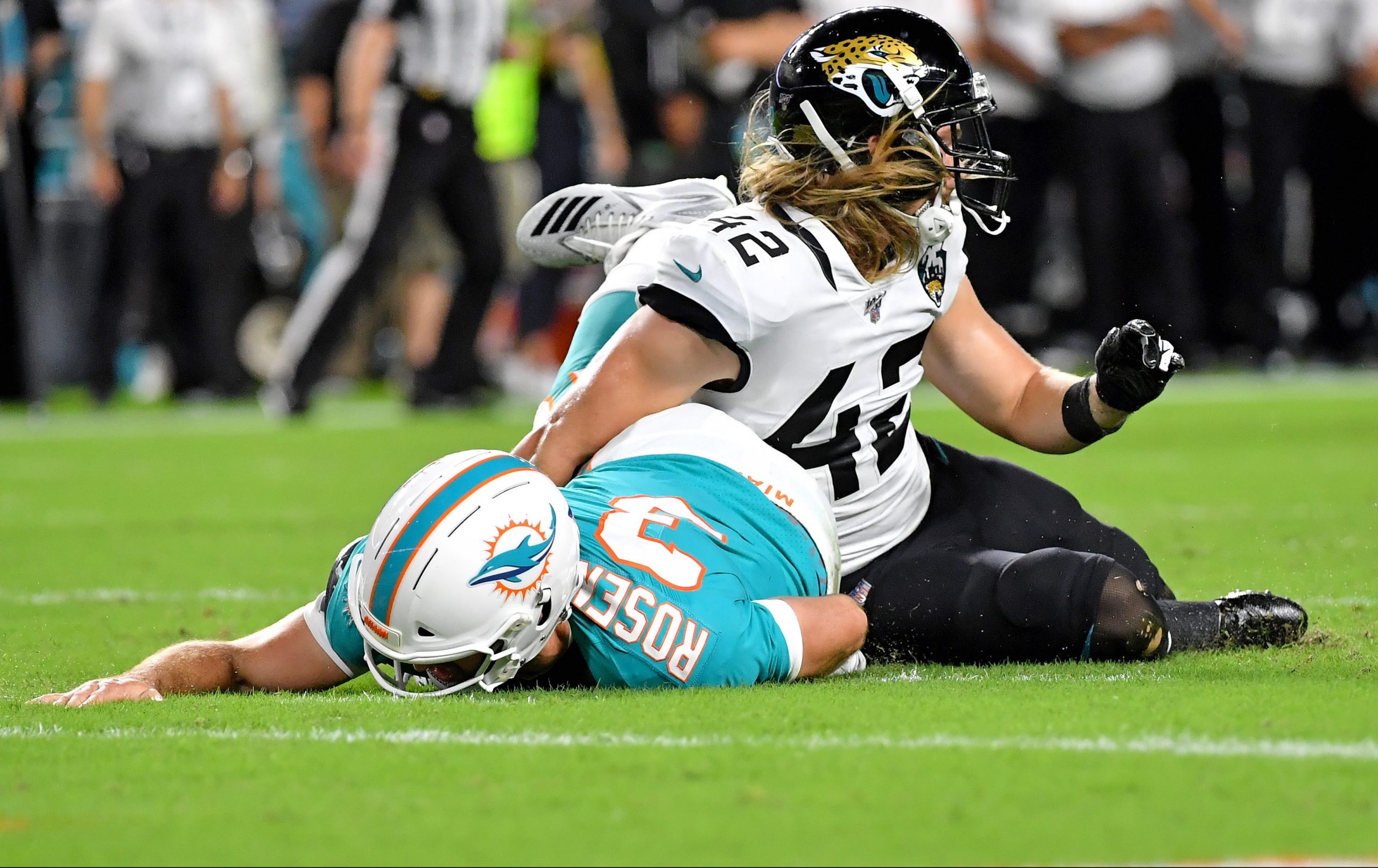 Josh Rosen: A Victim Of Circumstance

Like many young quarterbacks before him, Rosen wound up in the wrong place at the wrong time when the Ariszona Cardinals selected him with the 10th pick in the 2018 NFL Draft.

Arizona was in the midst of a retooling project. Longtime starting QB Carson Palmer and HC Bruce Arians retired at the conclusion of the 2017 season. The team elected to move forward with the defensive-minded Steve Wilks as Arians’ replacement and veteran Sam Bradford as the contingency plan at QB. Though the previous season had exposed many cracks in the team’s roster construction, GM Steve Keim seemed confident that his club could field a contender.

Entering a 2018 draft filled with excellent QB prospects, the Cardinals seemed out of position to take one of the best options, leaving many to believe that they would stand pat with Bradford. Instead, the organization forced the issue, trading up to pick ten to select Rosen, a prototypical pocket passer out of UCLA. Had Arians still been in-charge, this pick could have been fantastic, as Rosen’s arm strength and accuracy would have made him a perfect fit for the vertical passing offense that Arians had installed. Unfortunately, Rosen found himself paired with Wilks, who seemingly defers everything related to the offense to his coordinators.

Where It Went Wrong

As talented and “pro-ready” as Rosen was, the situation in Arizona was far from constructive for a rookie QB. A weak offensive line unit, a depleted receiving core, and an offensive coordinator (Mike McCoy, fired midway through the season) with an unnecessarily vast playbook filled with vanilla concepts were the base for Rosen in his first season.

Predictably, Rosen failed. Tasked with taking over the starting role from Bradford, the rookie completed only 55.2% of his passes for 11 touchdowns. Rosen also turned the ball over 24 times and took a sack on 10.3% of his dropbacks.

Though struggles marred his rookie campaign, Rosen was far from the worst rookie passer we’ve seen. It could be argued that Rosen did the best he could with the supporting cast he was afforded. Arizona’s roster and coaching staff were simply awful.

Steve Wilks was fired after just one season, and the Cardinals elected to replace him with former Texas Tech head coach Kliff Kingsbury, who was expected to install the QB friendly Air Raid offense. However, in Kingsbury’s eye, Rosen was not a good fit for his passing scheme, leading the rookie head coach to select Oklahoma QB Kyler Murray with the first overall pick in the 2019 NFL Draft. Unlike Rosen, Murray was an incredibly mobile passer who had thrived in a similarly styled attack under Lincoln Riley at Oklahoma, making him an ideal fit for the Cardinals’ new scheme.

Swimming With The Dolphins

With a new QB under center, Rosen was shipped out to Miami. Unfortunately, he was once again placed in an offense that was entirely devoid of talent. His stay as the starter did not last long.

The Dolphins now have a new QB of the future: 2020 first-round Tua Tagovailoa. Though his failures can be attributed exclusively to external circumstances, Rosen has once again been shunned. As of this season, it’s unclear if we’ll ever see Rosen as an NFL starter again.

How Can Rosen’s Career Be Salvaged?

There have only been a couple of passers who have been able to overcome circumstances similar to Rosen’s; the best examples come from almost thirty years ago. Tommy Maddox (Broncos) and Kerry Collins (Panthers) managed to overcome being jettisoned to bounce back with solid NFL careers. However, it’s worth noting that these two players failed to reach their ceilings until their early 30’s.

Like Rosen, Collins was a decorated college passer who was drafted by a team with almost no infrastructure or direction for the young QB, the then-expansion-team Carolina. After three and a half seasons of futility, Collins was waived. Collins eventually developed into a decent NFL quarterback for the New York Giants, even leading the team to a Super Bowl appearance.

Maddox’s road to relevance was far less conventional, as the UCLA product was initially drafted by Denver to backup and potentially replace John Elway. Partially due to Elway’s wrath, Maddox was ejected shortly after joining the team, bouncing between the bench and the minor leagues (the AFL and the XFL, the latter of which Maddox was an MVP in).

Nearly a decade later, Maddox would latch on with the Steelers, where he won the NFL Comeback Player of the Year Award in 2002. While the idea of Rosen becoming a lower-end starting QB for some team may not seem like the most exciting outcome, his value, in that case, could still be recouped to some degree.

The former UCLA star still possesses excellent mechanics. However, his ability to read defenses undermines this aspect of his game.

Rosen played in multiple offensive systems for the Bruins. He elevated his team with excellent performances on numerous occasions, including the legendary comeback he engineered against Texas A&M in his final season.

It’s clear from Rosen’s college tape that he is an extraordinarily gifted quarterback with “NFL arm strength” for days.

So What’s Next For ‘Chosen Rosen’?

Through two seasons, Rosen is a pretty typical young passer. His biggest flaw is that teams seek greener pastures rather than focusing on improving the situation for Rosen. With both Ryan Fitzpatrick and Tua Tagovailoa on the roster for Miami, Rosen’s best chance to start will certainly come elsewhere.

Rosen could benefit from playing on an offense with a proven track record of success manned by traditional pocket passers. In looking for some potential systems and situations that would be most beneficial to the resurrection of Rosen’s career, I’ve compiled a list of elements that may prove essential:

The Atlanta Falcons are a team that fits the bill to a tee. The Falcons have made do with an immobile pocket-passer (Matt Ryan) under center for the last decade. Behind Ryan, the club features ancient backup Matt Schaub, a player who Rosen would undoubtedly be an upgrade over. Though Ryan is entrenched as the starter for the Falcons, Rosen could be a cheap solution as the team’s contingency plan. Rosen drew close comparisons to Ryan during the pre-draft process in 2018. This, along with Atlanta’s need for a young QB, could make him an intriguing understudy to the former MVP.

I also could see Rosen find success for teams like Tampa Bay (where he could back up Tom Brady and play for Bruce Arians), Pittsburgh (he’s a far superior player to Duck Hodges and Mason Rudolph), or Detroit (where he’d be a solid fit in an offense designed for the oft-injured Matthew Stafford).

It seems that the Dolphins are inclined to keep Rosen on their roster. for 2020. Stashing Rosen is not the worst idea either, as Tua Tagovailoa’s injury history and Ryan Fitzpatrick’s age make the need for a reliable third quarterback reasonably high. Unless the Dolphins can receive fair compensation for the former first-round pick, he remains a high-upside prospect who could be flipped for an asset down the line.

Though it’s highly unlikely that the former five-star recruit will start any games for Miami this season, he’s still a name worth monitoring for SuperFlex dynasty leagues. We’ve seen players in similar situations (Brandon Weeden, Blaine Gabbert, Geno Smith, to name a few) receive starting opportunities after failing miserably with their first teams.

Whether Rosen is the next Kerry Collins or Tommy Maddox is a question that might not be answered for several years. However, I think Josh Rosen is still capable of being “the guy” for an NFL club. His upside is higher than that of any “failed” former first-round pick we have seen.

Let’s suppose Rosen can land with a team that will commit to him for more than one season. If that team could surround him with an offensive line or an acceptable receiving core, Rosen could look pretty decent. Asking for both of these elements seems generous given Rosen’s track record. In that case, the former UCLA star could quickly develop into a solid NFL starting quarterback. Whether he gets that opportunity or not, Rosen should at the very least stick around the league as a backup. After all, few second or third-string passers possess his natural skill.

For Rosen to get his career on track, it’s more likely than not that he will have to be the right guy in the right place for the first time. When that will happen is unclear. If he can’t seize his next opportunity, “Chosen Rosen” may be doomed to bust status for eternity.