An athletic, skilled, and smart receiver, Hunter Bryant offers a lot of upside as the #1 TE in the 2020 class. Check out @dynastyJon’s article on the Huskies’ YAC monster! 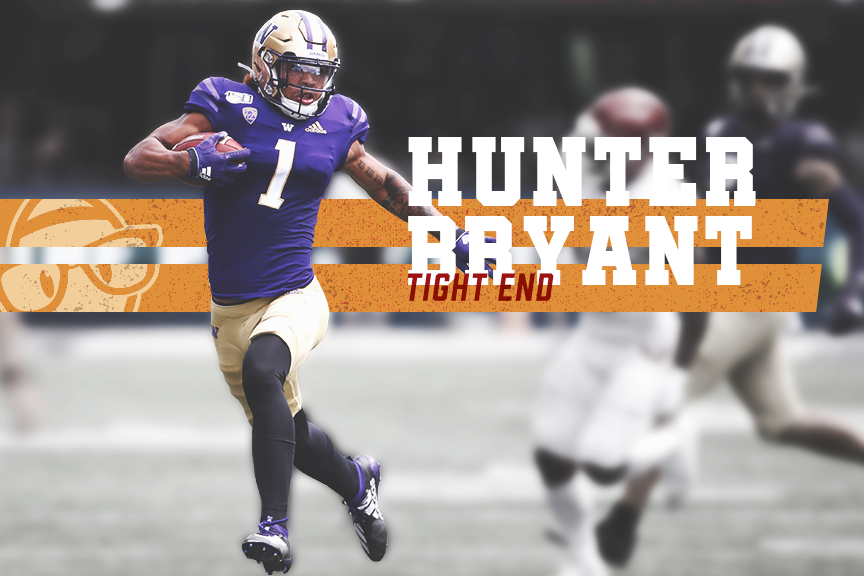 In the modern NFL, the prototype TE is becoming more common than your traditional blocking TE. For fantasy, in particular, these TEs are the ones that have our interest. They have the athleticism to be agile and balanced, they run good routes, and have the size and leaping ability to bring down contested catches. All of that being said, they now fit the mold of large WRs. They’re rarely the 6’6” 260-pound prospects we used to see.

Hunter Bryant personifies this perfectly. With a frame similar to Irv Smith JR (6’2” 239-pounds), he operates like a WR in the open field. Bryant doesn’t necessarily line up on the line of scrimmage with the O-line too much. Washington moves him all over the field to take advantage of matchups. His receiving ability and athleticism have translated well to the box score in 2019, as he has become one of Jacob Eason’s favorite targets. It’s not too often you see a college TE reel in over 700 receiving yards….. A breakdown of Bryant’s college stats can be seen below:

Hunter runs the slant and drag route very efficiently. He’s able to sink his hips and looks smooth in route breaks before catching the ball and blasting upfield. I also like his ability to run block. He’s used in so many different positions; in motion, as a fullback, or on the line, he routinely picks up the correct block and rarely gets pushed back. For a smaller guy, you may expect him to be overwhelmed by tacklers, but his athleticism allows him to get upfield quickly to block in the secondary.

Bryant has been nominated as a semifinalist for the John Mackey Award, given to the Nation’s most outstanding TE. For me, he holds the distinction of the most promising rookie TE in this year’s class. I don’t think this rookie class is as dominant as we’ve seen over the last few years, but his receiving ability akin to Evan Engram or Irv Smith Jr gives him upside to rack up receiving yards with ease.

Bryant fits the mold of the big-slot WR who can make plays down the field. I could see a team drafting him in the first few rounds; perhaps someone like Washington as a replacement for an aging Jordan Reed?

I encourage you to keep your eye on the YAC beast as he we approach draft season. With so many elite options in the class, he may be a 2nd round rookie pick, despite being the best TE in the class. If you’re a TE needy team, I’d imagine you’re focused on Bryant or Okwuegbunam to solve your issues.

Next Man Up: Regular Season Week 13
Conclusion Protocol: What We Learned In Week 12