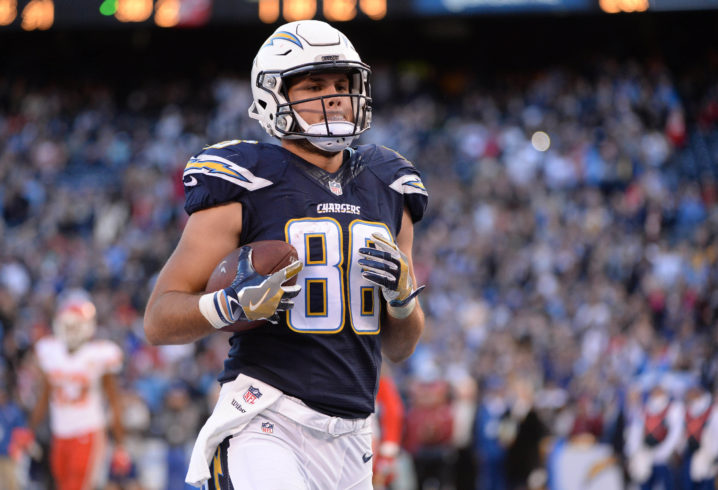 Hunter Henry was by most accounts, the next big Tight End advantage in fantasy. Primed to be the week to week advantage that Gronkowski, Kelce, and Ertz offer. He is only 23, the Chargers had moved on from Antonio Gates, and Henry was primed to take over the role and get over 100 targets this year. Then he tore his ACL and fantasy owners are scrambling to either get value or find his replacement. Some quick notes on the injury and what to do if you are struggling.

Virgil Green is now the starting tight end. He is not much of a receiving threat but is a great blocker. The Chargers involve the Tight End heavily in their passing attack so look for them to take a long look at pass-catching tight end free agents Coby Fleener, Julius Thomas, or even Antonio Gates, all of which could provide low-end TE2 numbers.

Outside of Keenan Allen, Hunter Henry was probably the best receiving threat on the roster. The number two and three targets are now Mike Williams and Tyrell Williams in some order. Phillip Rivers has averaged about 600 pass attempts over the last three seasons. Take out Keenan Allens 160 targets, and the 120 targets the running backs will garner, and there are about 300-320 targets up for grabs. Tyrell Williams has been very efficient on his targets and had over 1000 yards in 2016 when he was called upon to be a leading man in the offense. Mike Williams was drafted to be a dominant wide receiver and we may see his breakout sooner rather than later now. Both are buys for me, but Tyrell Williams is probably the better value given Mike Williams injury history himself and the fact that he is going to be a lot more expensive. Keenan Allen doesn’t really have a value change for me, you can only feed a guy so much and I don’t see him getting an increase in targets.

Charles Clay: Safety blanket for a new quarterback and best receiving threat on an offense that will have to throw, considering they just lost three starting offensive lineman from last year. Should see 100+ targets

Ben Watson: (Shoutout Rich Dotson) I think he should get a good amount of targets in Drew Brees offense, last time he played in NO (2015) he was a top 10 Tight End.

Ricky Seals-Jones: Showed big-play ability last year, Jermaine Gresham is still coming off a torn Achilles, a much harder injury to come back from, and that should clear the way for more consistent targets. The last two healthy Sam Bradford seasons, his leading tight end has averaged 120 targets.

Vernon Davis: Check out Jordan Richards article on Dynasty Nerds to get some more info on why he’s a good buy low.

Gerald Everett: Athletic, and should start in a McVay offense, we might be talking about a top 10 tight end asset next year. Last year McVay said he wanted him to be his Jordan Reed which I put a lot of stock in. Probably won’t help you as much as the other guys this season.

Of note, Philip Rivers is no spring chicken, turning 37 in December. I don’t think the ACL tear will hurt Henry as a player long term, we have seen plenty of elite players come back the next season and dominate, at every position. Do your due diligence and make sure he doesn’t have any structural damage but otherwise, I am not worried about his long-term health. However, the biggest thing for me is that Henry’s window of playing with a reliable quarterback just got 1-year shorter so I would consider moving him for anything close to his value before the injury. Henry is probably my TE9 now. As I would move him for any of the following players. (Burton and Rudolph would be toss-ups for me)