Yannick Ngakoue was signed on the first day of FA. Let @Spydes78 tell you why the Vegas marriage between he and the Raiders is one you don’t want to miss. 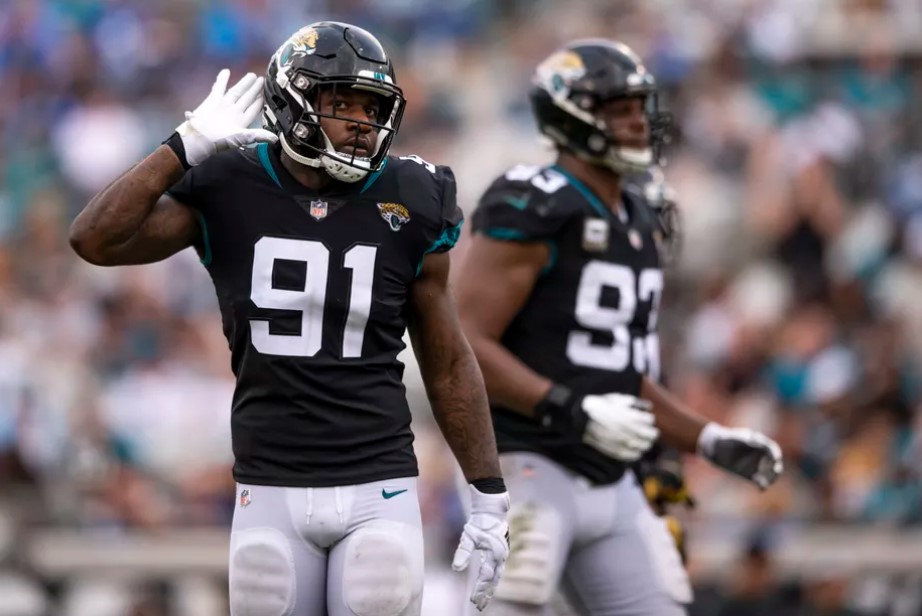 It’s time for the NFL’s annual career fair, but high paying jobs are in short supply.

Legal tampering began on Monday, 3/15, unofficially lifting the curtain on the much-anticipated NFL free agency period.  Plagued by the pandemic (and the associated decrease in stadium attendance), this season’s salary cap was reduced by 8%. The cap had increased during every offseason since 2011. This development left several front offices scrambling to achieve compliance.  In turn, many general managers were forced to release or trade away players who might otherwise have been in their plans for 2021, and beyond.

With an infusion of talented players vying for fewer dollars in the market, pro football fans everywhere have tuned in with great interest to watch the offseason spectacle unfold.

And so it was, amid this fervor, that today’s subject, Yannick Ngakoue, found a new home with the Las Vegas Raiders within hours of commencing his job search.  Despite the aforementioned cap restrictions, as an elite edge rusher, Ngakoue still found his services to be in high demand. He signed a fully guaranteed 2-year, $26 million dollar deal.

In what is an unusual circumstance, Ngakoue now finds himself under contract with his fourth NFL franchise, all before celebrating his 26th birthday.  Originally drafted by the Jaguars, Yannick spent the first four years of his career wreaking havoc in Jacksonville.  However, things got messy in 2020 when the Jags attempted to apply the franchise tag. This prohibited him from testing free agency.  A public feud with the franchise commenced. The Jaguars ultimately agreed to trade Ngakoue to the Vikings just prior to the start of the regular season.  However, Yannick’s travels did not end there. A trade deadline deal saw him rerouted from Minnesota to the Ravens after only six games with the slumping Vikings.

Given his tumultuous career path, Ngakoue certainly relished the opportunity to enter the 2021 offseason, for the first time master of his own destiny.

What makes Yannick Ngakoue worth such an extravagant pay day?  To understand the impact of Ngakoue landing in Las Vegas, we must first understand what he is capable of as a player.  He is a long, rangy defensive end who can use multiple pass rush moves to devastating effect in his pursuit of the quarterback.  To use the parlance commonly employed by football insiders, the guy is simply a ‘game wrecker’.

One of Ngakoue’s primary assets is his burst.  Blocking schemes must always account for his ability to expeditiously close a pocket.  In the clip below, the Panthers were woefully inadequate in their plan in this regard.  As you can see, they paid the price with a punishing hit on their quarterback, and a resulting turnover.

To keep his approach fresh, Ngakoue has also developed a very effective spin move.  Often, he will set up offensive tackles with his speed rush, and then deceptively apply a spin en route to an interior rush.  In the clip below, notice how he keeps the tackle off balance, which allows him to penetrate the backfield for a sack.

Last, but certainly not least, on the list of Ngakoue’s standout attributes is his agility.  Offenses are increasingly looking to spread the defense with deceptive alignments and run-pass options. An edge rusher with discipline and flexibility is a tremendous attribute in the modern game.  Watch in the cip below, as he showcases precisely these talents in diagnosing and defeating a designed bootleg against the Cowboys.  Note his keen change of direction, staying step for step with Dak Prescott before ultimately dispatching him for the sack.

What Happened In Vegas

Ok, so we have established that Ngakoue is a talented player, but how does he fit in with the Raiders?  Well to put it simply, he is precisely the type of pass rush threat that Las Vegas has been sorely in need of.

In 2019, the franchise invested multiple draft picks in an attempt to address the pass rush. The Raiders selected both Clelin Ferrell and Maxx Crosby within the first four rounds.  And while Crosby has been an excellent contributor over his short career, Ferrell has unfortunately fallen far short of lofty expectations.

Things reached rock bottom for the Raiders in 2020, when their team totaled just 21 sacks on the season.  To contextualize, consider that Ngakoue individually has averaged over 9 sacks per season in his five year career.  The contrast is significant, and thus you can see why the Raiders made Ngakoue a priority signing.

Understanding Ngakoue’s background, strengths, and his fit with the Raiders are all of value. Still, as a dynasty IDP owner you will also undoubtedly want to know what this signing means to you.  After laying out significant cash in a depleted cap season, Las Vegas will certainly look to feature their new pass rush specialist which can only be a positive for his overall value.

You should, however, be aware that one of Ngakoue’s limitations is that he is incredibly specialized in the art of pass rush.  As a consequence, he lacks a stable tackle floor and thus can be inconsistent from week to week.  To support this statement statistically, consider that he has averaged only 29.0 combined tackles per season, while also maintaining 9.1 sacks per season.  Thus, nearly a third of Ngakoue’s overall career tackles are in the form of a sack!

Yannick’s has an obscene sack to tackle ratio. As an IDP asset, his value is maximized in leagues which emphasize splash plays like sacks, forced fumbles, and tackles for a loss.  Additionally, consider him with a premium in best ball formats, where inconsistent contributions can be more of an asset.

While not without faults, I feel that Ngakoue offers plenty of upside. He will find the environs of Las Vegas to be quite rewarding.  All that’s left is for you to put a rush on that unprepared league mate, and bring home some IDP gold for your franchise today.

I thoroughly enjoyed bringing you this piece, and would love to continue the conversation on Yannick Ngakoue.  Please feel free to comment below or contact me @Spydes78 on Twitter.  And also, stay tuned to @DynastyNerds for a steady pipeline of content from our eminently qualified staff to carry you through your offseason.  Enjoy the grind!