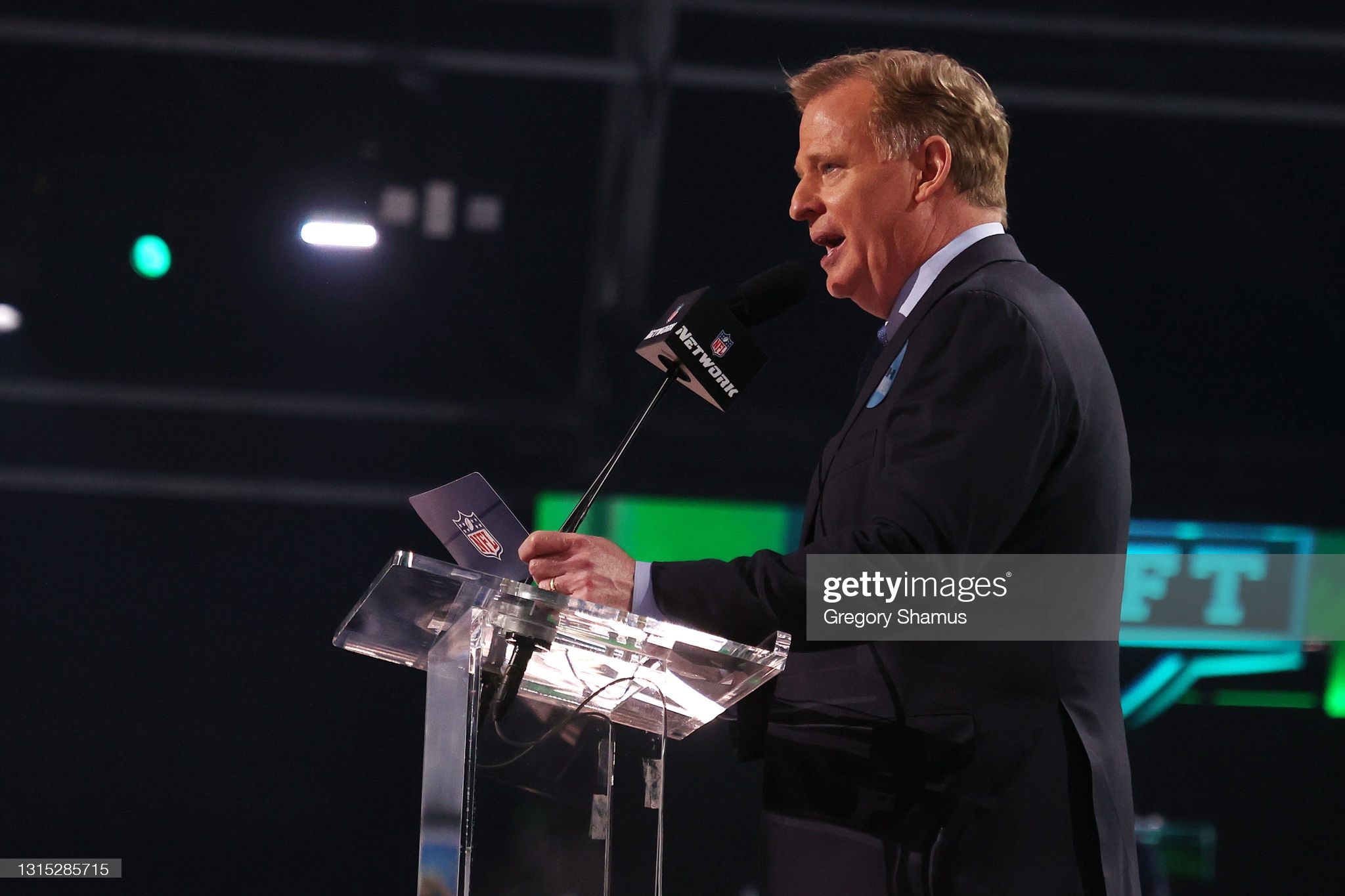 As the 2021 NFL Draft turns the page on Day 2, Dynasty Nerds is here to provide you with instant reactions. I’ll cover the second-round defensive players that you need to know for your upcoming IDP rookie drafts. Where were they selected? What are the traits that make them valuable? And how do they fit within their new team? Read on, my friend. Read on.

Background: At 6’1″ and 207lbs, Jevon Holland has prototypical size for a pro safety. Couple that with a 4.46s 40-yard dash, and you’ve got an exceptionally balanced prospect. As a defensive back who is equally capable of tight coverage and in-box tenacity, he was pretty attractive to the Dolphins.

Team: Likely to slot in as a free safety in Miami, Holland’s competition for game reps will consist of unimposing teammates, Bobby McCain and Brandon Jones. Thus, if Holland takes coaching and can digest his playbook, he should be contributing to the stat sheet soon.

Value: In terms of dynasty value, Holland is worth a late-round pick. His value will depend on your scoring settings, though. As a free safety, he will be more dependent on splash plays and may not have the consistency of a dependable tackle floor. However, he has draft capital and a clear route to playing time on his side.

Background: Christian Barmore checks almost every box that you want in a defensive tackle prospect. The 6’4″, 310lb prospect terrorized the SEC in precisely the way you might expect. Many had a first-round grade on Barmore based on his burst-power combination.

Team: Head coach Bill Belichick has forged a well-publicized relationship with Nick Saban, which often seems to inform the Patriots’ draft strategy. Though Tom Brady, Julian Edelman, Rob Gronkowski, and crew are frequently considered the Patriots’ face, success in the trenches has been a requisite hallmark in Foxborough for decades. Barmore will continue this time-honored tradition. Initially, he may see time at the nose or defensive tackle.

Value: Typically, defensive tackles aren’t highly coveted in IDP. More particularly, in a Sleeper-type format which lumps edge rushers and tackles in the same bucket. However, Barmore’s talents are so excellent. I would be willing to use a late pick on him. Depending on your roster needs, I would slot Barmore alongside the top safeties. That means he should get taken after the top linebackers and edge rushers have come off the board.

Background: Measuring at 6’0″ and 197lb, Richie Grant is slightly smaller than the previously mentioned Holland. However, one trait that Grant shares with Holland is excellent versatility. Grant can cover in open space. However, he doesn’t shy from contact. He’s more than capable of applying the big hit to make an opponent think twice about stepping into his office.

Team: The Falcons pantry is woefully bare at the safety position. It’s a positional group that is longing for a new identity with the departure of Keanu Neal earlier this offseason. Given the draft capital and the team need, Grant’s likely to see the field quickly. Perhaps as soon as in Week 1.

Value: Grant’s worthy of a late-round pick in your rookie drafts. He’s almost sure to see meaningful snaps early and often. Rather than use that 4th or 5th round pick on the 20th best wideout, grab Grant. It would lock up a guaranteed contributor for your team with minimal investment.

Background: Heading into the 2021 NFL Draft, many had Trevon Moehrig rated as the top safety of the draft class. With a nose for the ball, Moehrig shines as a free safety possessing the necessary speed to blanket receivers in coverage. To complement his physical traits, Moehrig also demonstrates a mastery of scheme, and his play indicates excellent diagnostic capabilities.

Team: The Raiders recently reacquired former first-round pick Karl Joseph during free agency. Thus far, Joseph hasn’t lived up to his investment. Now, he’s returning to his original team after a short stint with the Cleveland Browns. With an inexpensive, one-year deal, the Raiders will look for Moehrig to challenge Joseph. He’ll be afforded every opportunity to win the job in training camp this summer.

Value: Moehrig completes an excellent trio of safeties, all selected in the second round of the 2021 NFL Draft. Like the other two, I’ve already mentioned, I would advocate drafting Trevon Moehring. Given the similarities in value, the clever play would be to trade back and generate additional capital. Then, pick the last one of the three safeties remaining on the board.

Background: Azeez Ojulari was frequently graded and mocked as a first-round talent. He is a well-rounded pass rusher who attacks with good bend and strong hands. At 6’2″ and 249lb, a light build was perhaps the only pre-draft knock on Ojulari.

Team: The New York Giants will operate out of 3-4 base defense, but, like the rest of the NFL, they’ll feature multiple fronts. This adaptability suits Ojulari ideally. The Giants may ask him to fill a base outside linebacker role rather than be a traditional edge rusher. However, don’t be dissuaded by this positional assignment. Intelligent coaches will look to feature Ojulari’s ability to put heat on the quarterback.

Value: Ojulari is a mid-round value. Scout your league’s scoring platform and determine whether Ojulari is regarded as an “LB” or a “DL” as this may impact his upside. Indeed, the ability to plug him into your lineup as a defensive lineman could potentially inflate his value.

Background: Though commonly listed as a linebacker, Jeremiah Owusu-Koramoah (JOK) is undersized. He’s ideally suited to be a ‘tweener’, safety-linebacker hybrid role. JOK plays fast, has good range, and is capable of electrifying plays.

Team: The Browns have been chasing an impact player at the linebacker position for a very long time. In recent drafts, they have invested in players like Jacob Phillips, Sione Takitaki, and Mack Wilson, thus far with limited success. This offseason, they made a one-year investment in dependable free agent Anthony Walker. However, the long-term future is still undefined. With impressive talent in the Browns’ safety corps, I anticipate that they intend for JOK’s early contributions to come from the linebacker position.

Value: JOK is the darling of many in the amateur scouting community. He has undeniable traits and could forge an excellent role. However, I do have concerns about where he fits in initially with the Browns. Certainly, keep him on your radar for your rookie draft, and pounce if you see the right opportunity. However, be cautious not to fall in love with a name. JOK feels like a player that many may reach for and end up being ultimately disappointed.

Background: If Nick Bolton were slightly more prominent in stature, he likely would’ve been walking the NFL stage on Thursday as a first-round draft pick. At 5’11” and 237lb, many may prematurely dismiss this prospect as too small. However, when you study Bolton, you find a very physical linebacker with a respected work ethic.

Team: The Chiefs have been a contemporary contender, and thus you wouldn’t expect many weaknesses on their roster. However, the IDP vultures have been circling overhead of the limited Anthony Hitchens for years. In the second round, the pick of Bolton may finally signal a changing of the guard at a position where it is desperately needed.

Value: Many suspected that last year’s selection of Willie Gay would spell the end for Hitchens. However, the Chiefs incomprehensibly continued to limit Gay’s snaps deep into their 2020 Super Bowl run. Thus, Bolton’s no sure thing. However, he’s a top linebacker prospect heading to a successful organization. I believe that Bolton will eventually shine. Regard him in tier with JOK and Ojulari. Nab the least expensive one of the trio.

Background: Unlike some edge rushers who specialize in pursuit of the quarterback, Carlos Basham Jr. isn’t a liability when it comes to defending the run. He plays his gap assignments with discipline and is often able to bring down the ball carrier. However, don’t be misled. Basham can still bring the heat and collapse a pocket when compelled to do so.

Team: With Jerry Hughes and Mario Addison staffing the defensive end positions, the Bills starting edge rushers have become quite long in the tooth. The ascending organization recognizes this need and has consistently invested in their pass rush during recent drafts. Ed Oliver, AJ Epenesa, Gregory Rousseau, and now Basham will form a talented nucleus of young Bills defensive linemen who will terrorize the AFC East for years to come.

Value: With his second-round selection, I’ve got Basham valued similarly to fellow edges, Joe Tryon and Payton Turner. I have no qualms about the talent, but I’m uncertain how the snaps get distributed to a suddenly crowded positional group. Basham’s still worthy of your attention. However, be cautious not to overvalue him in light of the packed house in Buffalo.

I thoroughly enjoyed bringing you this piece, and would love to hear about your draft reactions.  Please feel free to comment below or contact me @Spydes78 on Twitter.  And also, stay tuned to @DynastyNerds for a steady pipeline of content from our eminently qualified staff to carry you through your entire offseason.  Enjoy the grind!