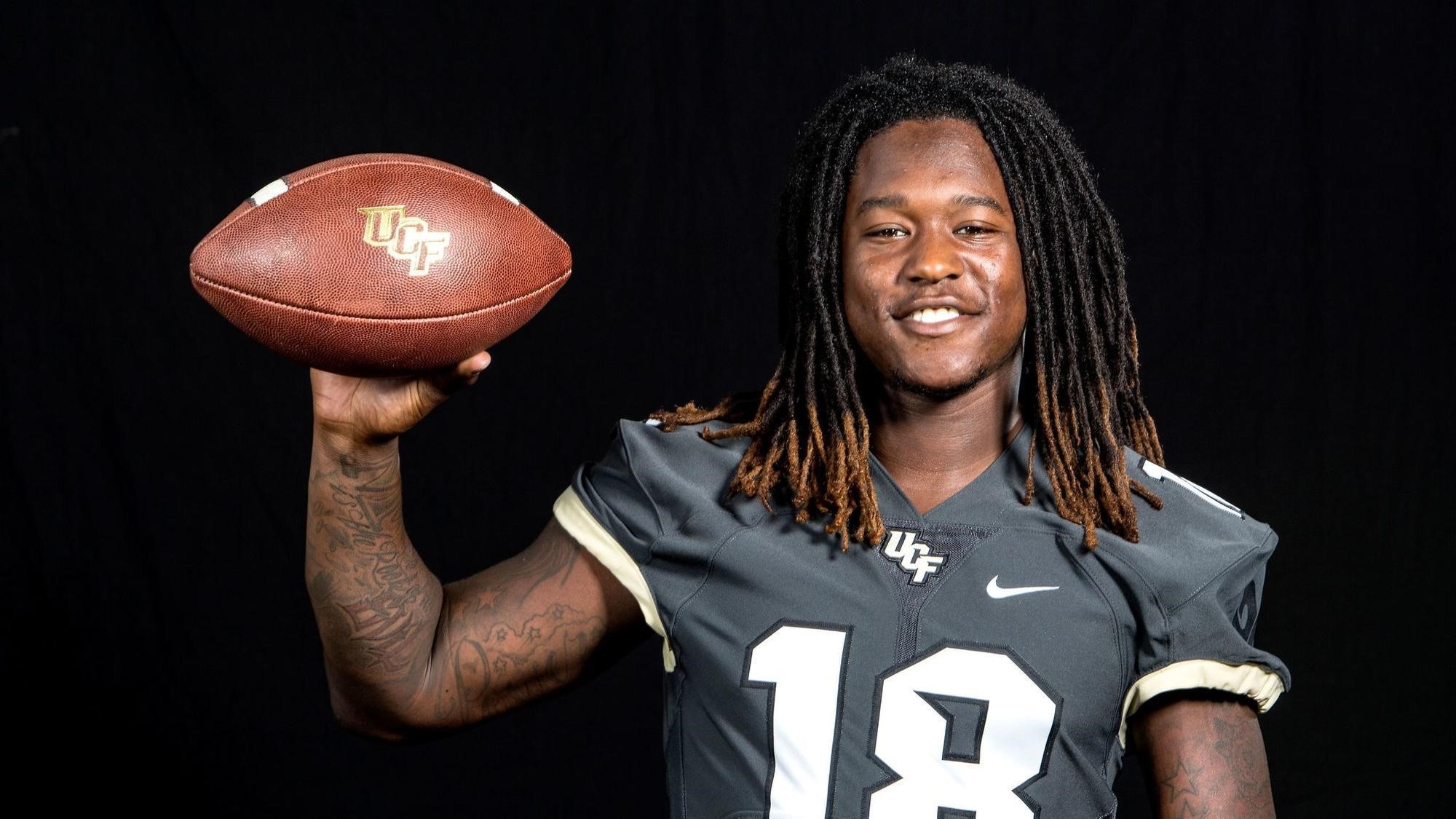 As your IDP guy here over at dynastynerds.com I felt it would be appropriate to do a breakdown of one of the stars of the 2018 NFL combine UCF Shaquem Griffin. Even as a non-IDP guy most of you know who he is from his great story and if you didn’t I know after last weeks combine you sure know who he is now. I have liked Griffin dating back to last year and as an IDP cornerback streamer in most of my leagues I added and dropped his twin brother Shaquill about a dozen times across my leagues last season. I’ll share with you his story as well as the breakdown of him.

Shaquem Griffin is a redshirt senior who played at UCF with his twin brother Shaquill who is now with the Seattle Seahawks. Unlike his brother, Shaquem had his hand amputated at four years old due to a prenatal condition. Since that time he has made it a point to prove doubters wrong who said he couldn’t play football at the highest level and boy has he done that. The brothers attended UCF together while Shaquem redshirted his freshman season Shaquill did not and entered the draft last season. Shaquill was drafted in the third round by the Seahawks in last years draft after four years at UCF he recorded 59 tackles, one sack, and one interception in his rookie season while his twin was still putting on a show at UCF. Shaquem like his brother played DB at UCF but after three years (one redshirt) at DB in 14 total games, he switched to LB for his junior and senior season. His last two seasons at UCF playing LB Shaquem started 26 games and really made a name for himself as an impact player in college.

Switching to LB to start his junior season really showcased his athletic ability and Griffin really shined in this role. In 2016 he had twelve sacks and was named the AAC’s defensive player of the year and followed that up in 2017 with a seven-sack season. At LB in those two seasons, he had 89 defensive stops. In 2017 he lead his team to what some call a “National Championship” season after going undefeated and beating Auburn in the 2018 Peach Bowl. If you are a doubter of his or were before the combine I will tell you to look no further than that Auburn game. Griffin was named defensive MVP of that game while creating ten total pressures and seven defensive stops. In that Peach Bowl, Griffin was flying sideline to sideline for all four quarters creating havoc for Auburn’s offense. Every good story has to have a good ending and Griffin had his as a Cinderella team who went undefeated and didn’t receive the chance to play in the BCS playoff faced an SEC powerhouse who beat both teams that would eventually play in the BCS title game. UCF went on to win this game and Griffin in true heroic fashion created the last pressure on Auburn’s QB to force the game-ending interception. 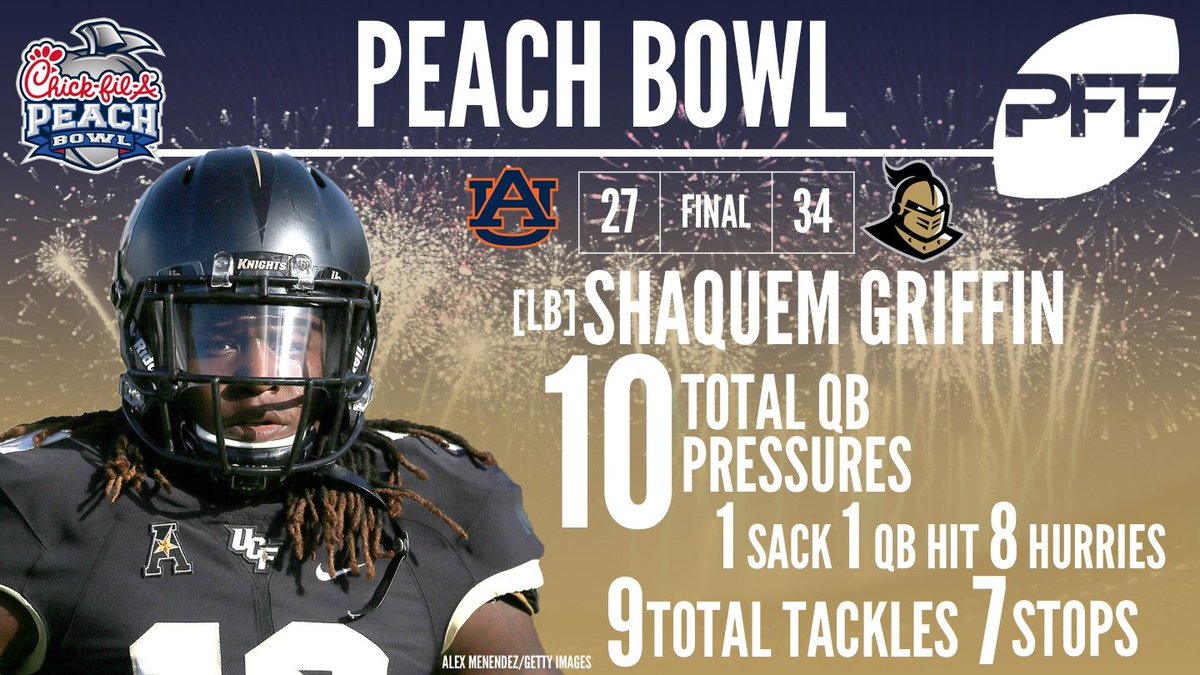 Griffin attended the Senior Bowl in Mobile, Alabama where he didn’t have the greatest week. He weighed in a little light for his position at 223 lbs he worked with the LBs all week and struggled in one on one coverage. He made the most out of his pass rushing opportunities in practice but struggled to get any pressures during the actual game. The Senior Bowl isn’t a game I put a ton of stock in as mostly everyone gets a chance to play so if a player doesn’t look great I certainly don’t hold that against them. By now I’m sure we’ve all heard the story but Griffin was invited to the NFL combine in Indianapolis and effectively destroyed it. Griffin came in at 6’0” and 227 lbs slightly heavier than his Senior Bowl weight. Using a prosthetic on his left arm Shaq put up twenty reps of 225 lbs on the bench press which was more than some elite level offensive line prospects. The show stealer was the forty yard dash though where Griffin ran a blazing 4.38 breaking the record for the fastest an LB has ever run. Let’s just forget LB for a minute and mention it’s a faster time than OBJ, Zeke Elliott and Julio Jones for what it’s worth. You guys have heard the old adage “you can’t teach speed” well look no further than Shaquem Griffin. 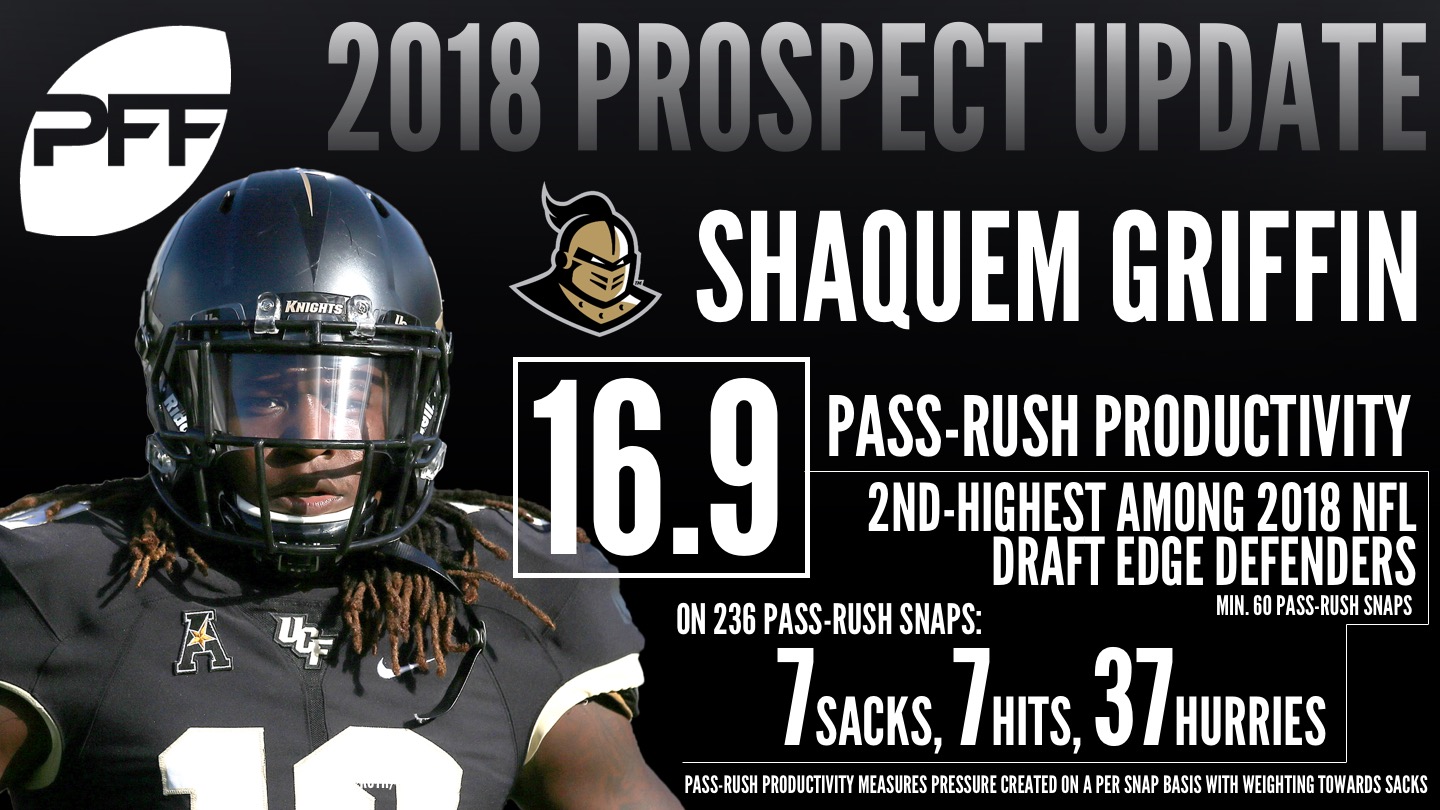 Now we look at Shaq as a prospect after his super productive last two season in college. While his 2017 season was memorable in winning both a Defensive MVP and leading his team to a Peach Bowl victory he also graded out per PFF as the second most productive as far as pass rush score goes among 2018 edge defenders in the upcoming 2018 NFL Draft. It’s fairly certain that he will be drafted as an OLB/ Edge Rusher in likely a 3-4 scheme. There was the talk of a few scouts having a fourth-round grade or undraftable on him pre-combine but with the happenings of the last week combined with his college production, I would be shocked if he makes it past round two or three. There’s no doubt Griffin is extremely undersized for his position on the next level and it’s likely if he can’t put on weight to his frame he might struggle against NFL tackles. At 237 lbs there’s no question he would be one of if not the lightest edge rusher in the entire NFL and although his combination of strength and speed are rare he will find it difficult to stay on the field for all three downs and be productive at getting after the QB. Robert Mathis was a name that came up for overachieving pass rushers who played at a lighter weight while a study showed even the most undersized effective pass rushers in the NFL played at a weight of between 240 and 250 lbs.

While browsing twitter I saw comps to Hasson Reddick who was drafted in the first round a year ago by the Arizona Cardinals with similar attributes and size to Griffin. Reddick also from the AAC is an undersized 235 lbs and really struggled to find his way in a dynamic Cardinals defensive scheme a year ago. Reddick later became semi-effective by switching positions between downs and this is where Shaq’s IDP value is for me. As a dynasty owner to make Shaq worthy of a pick in your rookie drafts he just simply will have to land in the right situation. There are only a handful of defensive coordinators that mix it up enough with a scheme to fit their personnel but if the team is all in on him I can see the finding ways to use him and his special skills. So the few thoughts I had bouncing around in my head related to his IDP value were the hybrid scheme teams. Wade Phillips, Gus Bradley, and James Bettcher are a few coaches I think of as far as dynamic schemers related to the talent they have. Bettcher formerly of the Cardinals really created the “money backer” position we think of today in football. The money backer is a combination of linebacker and safety while most teams use this with their dynamic strong safeties in nickel or sub packages Arizona found a way to use it in their regular packages when they drafted Deone Bucannon a few years ago. Now I don’t see Shaquen being able to play that position because even as fast as he is his coverage skills aren’t something many scouts have pointed to as a clear strength. As rare as the money backer position is as you need a very special athlete to play it there have been many LBs who have turned into that type of player around the league. Shaq Thompson, Myles Jack, and Telvin Smith are guys I think of. All three at times play too fast for their own good but are all very effective in what they do. While Griffin is probably a more effective pass rusher and specifically off the edge than any of those guys he will have to copycat his game off of those players to create IDP production. As undersized as he is I can’t see Shaq being an edge player only and staying on the field for three downs he will need to develop himself into a player closer to Shaq Thompson to be successful in both the NFL and dynasty leagues. As the rules in the NFL continue to favor offenses and pass catchers a player like Griffin can be a very effective tool for an NFL defense. The evolution of the RB and TE position clearly provides the offense with a distinct advantage and if there is a possibility of pairing up a dynamic talent like Shaquem Griffin with a great defensive mind he can make an instant impact at multiple positions leading to long-term success for his IDP value.

The story of Shaquem Griffin is as good as the player and NFL teams already are taking notice. As inspirational as he has been to so many kids and players already I wish him nothing but the best in his career. He’s a great talent and being drafted with what he’s had to deal with his whole life will be a great moment to watch. We can fall in love with a player through the combine and draft process but we still have to look at the big picture because dynasty fantasy football is a game and being a good NFL player doesn’t always translate into being a good fantasy football producer. Playing in IDP leagues affords you the luxury of being able to take defensive players you like in later rounds with very little risk if any of the dynasty nerds listeners are still playing in team defense leagues make it a goal to change that in 2018 and join at least one IDP league. I promise that you’ll never go back. Thanks for reading an hope you enjoyed this any feedback is greatly appreciated.