Syracuse DB Andre Cisco is next up for @Glosser13 in this rookie profile series. Find out everything you need to know about the Syracuse safety. 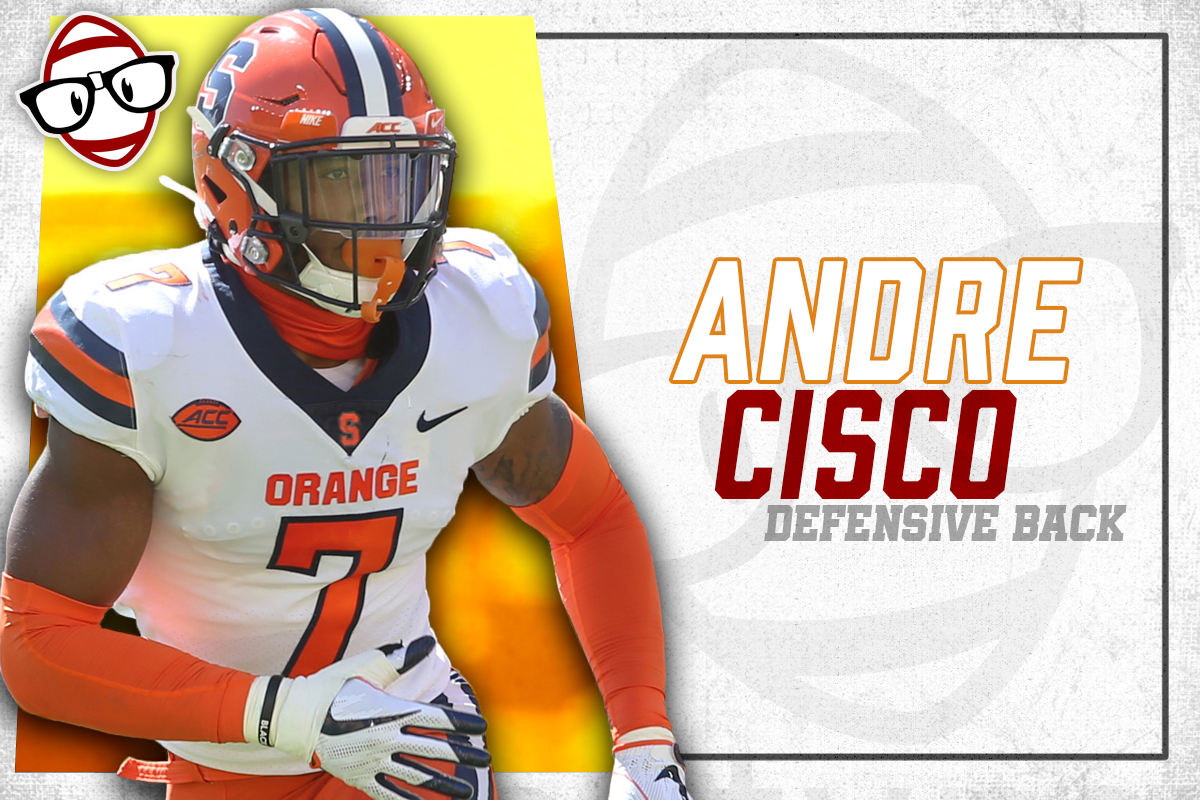 Andre Cisco was born in Queens, New York; he played football at St. Anthony’s High School for two years before transferring to IMG Academy for his junior and senior seasons. IMG is widely respected for getting high school players to focus on growth and development, preparing them for a future football career. Cisco would only appear in 14 games, collecting 21 tackles, 8 passes defended, three fumble recoveries, and an interception. Cisco committed to Syracuse as a three-star prospect in the 2018 class. 247sports.com had him ranked as the #73 safety and 137th prospect from Florida with a composite score of 0.8552.

After playing in 13 games as a freshman, the Syracuse safety would only appear in 11 games over his next two seasons. He declared for the 2021 NFL draft after a season-ending injury in 2020. Cisco completed his college career with 136 tackles, 13 interceptions, 14 passes defended, 2 forced fumbles, and a fumble recovery.

Syracuse football fans surely won’t forget the impact plays Cisco made during his short career with the Orange. The 16 impact plays made over just 24 games give him an average of 0.66 impact plays per game. When Cisco is on the field, he finds a way to make plays that can change a game. This will make him a valuable IDP player in the NFL.

There’s a whole lot to like when you watch Andre Cisco play defensive back, along with some things not to like as well. Cisco has a knack for the impact play, as his career interception numbers show. The Syracuse safety seemed to play his best defensive football under former Orange defensive coordinator Brian Ward in 2018, who allowed him to play more freely. He was able to read plays and react with an Orange front seven that finished 2nd in the country in sacks. The Orange defense finished with 18 interceptions in Cisco’s freshman season, and he had seven of those.

Andre Cisco lines up against a heavy package on 4th and goal. The TE shifts, and it appears he may be Cisco’s responsibility in man to man. He stays disciplined in his gap if the offense were to run the ball. He reads the quarterback’s eyes the entire time, and despite a busted play by the QB off play-action, he’s able to make the easy interception.

The importance of having a safety you can trust to direct traffic on the back end of your defense is crucial. Defensive backs are asked to defend all three levels of the field. Not only do they need to know their coverage responsibilities but to disguise them as well. Andre Cisco has been caught roaming free in the secondary. This will need to be coached up on this with his new NFL team.

The margin for error is so small with the speed of wide receivers at the professional level. Andre Cisco has been rumored to run a sub 4.40 forty-yard dash. The lack of NFL combine this year will limit the amount of stock I put into his testing numbers. Regardless, a good time in the shuttle can only help prove what we know about Cisco. He has the range and ability to make plays in space. The more ground he can cover, the more chances he has to make a play on the ball and produce fantasy points.

Cisco starts this play roughly 10 yards off the line of scrimmage and is able to close on the short crossing route like a missile. He puts a big hit on the WR, forcing a 3rd and long.

The number of ups and downs when you watch Andre Cisco’s tape will make your head spin. There are moments where he looks like a potential elite NFL safety, and there are moments that make you think he could be a career backup. He has proven his worth in coverage, especially during his 2018 season, when he was able to play a full season.

He has 14 passes defended in his career and 13 interceptions to go along with a lone defensive touchdown while in coverage. Cisco’s injuries in both his sophomore and junior seasons have hurt his growth. He was on track in becoming one of the highest-drafted safeties in this class.

One of the key traits of playing safety at any level is discipline in your reads. In most cases, you’re the last line of defense. Jumping a route can be the difference between an incompletion and a touchdown. Andre Cisco has great range and excellent ball skills, but he has been beaten far too many times on double moves in college.

It’s a very Dr. Jekyl and Mr. Hyde situation with Cisco when you break down his overall coverage. In his defense, he was oftentimes out of position from a scheme standpoint in the Syracuse defense. A good defensive coordinator in the NFL surely can coach this out of him and will have to for him to reach his full potential.

Cisco goes all in that it’s a run and allows a simple play-action to leave him flat-footed, and he gives up an easy touchdown. These plays can’t happen if he ever wants to be a complete safety in the NFL.

Andre Cisco has untapped potential, which is scary to think about given his age, size, and college production. The range he is being drafted in mock drafts makes it very difficult to gauge his value. The increased amount of defensive backs being used in current defensive schemes leads me to believe he will find a role.

I don’t see any possible scenario where Andre Cisco finds his way into the first round. This might not be the worst thing for IDP managers. The idea of Cisco landing on a team with a well-established defensive system and defensive coaching could only improve his chances at fantasy production.

The Atlanta Falcons, Las Vegas Raiders, and Jacksonville Jaguars would be my top three potential landing spots. All three teams need deep safety and can use a player like Cisco. I mentioned a good defensive system that those teams don’t have, but they all offer early playing time and higher snap percentage.

The recent trend of instant fantasy production from the safety position from the 2020 class (Chinn, Winfield, Kam Curl) could very well be the new trend across IDP leagues. The nickel defense being the new “base defense” should lead you to believe that DBs are valuable for fantasy production. Andre Cisco is one of many upside safeties in this 2021 class who can be valuable in IDP leagues.

In both seasons that Andre Cisco has played at least 9 games, he has collected at least 40 solo tackles and five interceptions. In IDP123 scoring, that’s 110 fantasy points. If that was his floor as an NFL player, I think dynasty managers would be thrilled with that.

Thanks for taking the time to read. I appreciate your continued support as the IDP team at dynasty nerds continues to bring you rookie profiles. The best advantage to have to go into your rookie draft is knowing a little bit about every player available. As always, feel free to reach out to me on Twitter @Glosser13 for any of your IDP questions.