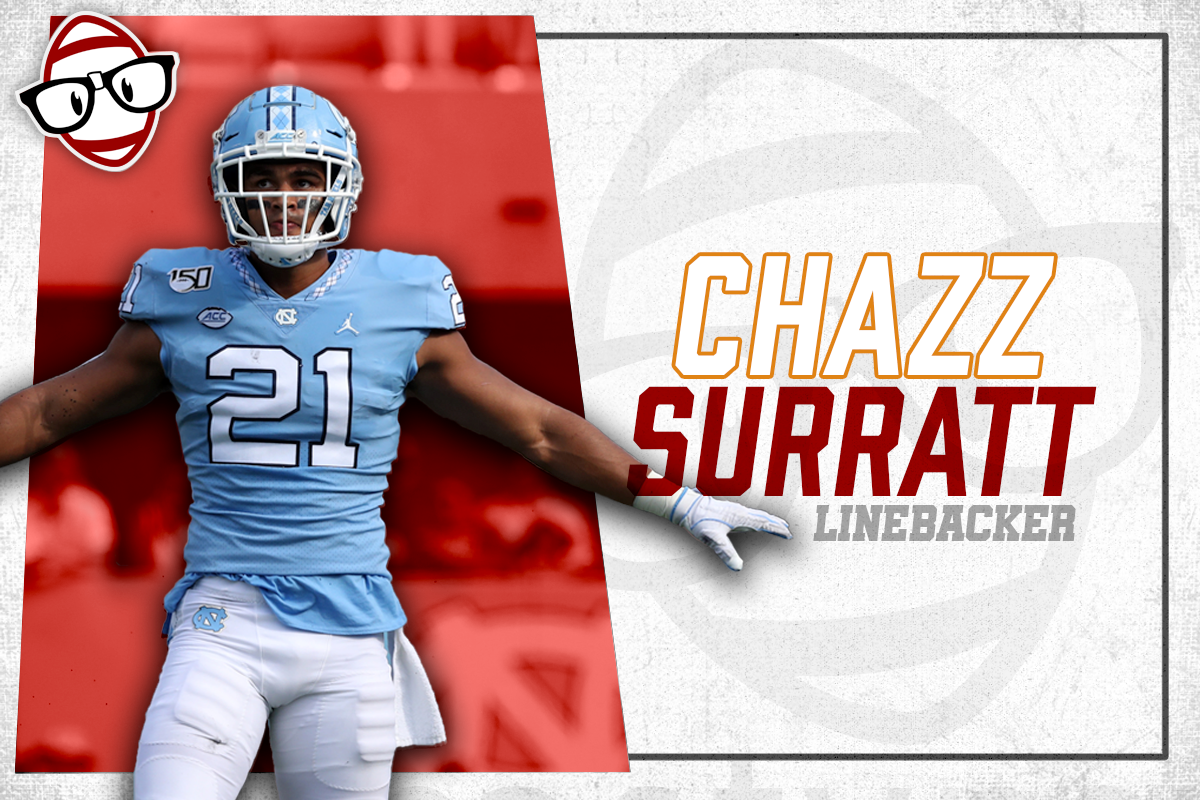 Chazz Surratt is a native of Denver, North Carolina; a two-sport athlete at East Lincoln High School excelling in both basketball and football. Surratt averaged over 19 points per game on the hardwood while also starting at quarterback for three seasons. He would go on to throw for over 9,800 yards with 119 passing touchdowns. He was named Parade National Player of the Year as well as AP Offensive Player of the Year in North Carolina as a senior. Surratt had interest from both Clemson and West Virginia as a three-star dual-threat QB in the 2016 class but would choose to stay close to home and play at UNC.

Chazz Surratt would fail to make an impact as a true freshman as he redshirted in 2016. In 2017 he was given every opportunity to impress, Surratt played in nine games throwing for 1,385 yards with eight touchdowns and just three interceptions while adding 210 rushing yards for another five scores. Unfortunately for him, that would be as productive as he would be for the Tar Heels as an offensive player.

As a Redshirt Sophomore, Chazz Surratt had a season he would like to forget. In 2018 he would only play in one game throwing three interceptions while completing a miserable 40% of his passes in a loss to Miami. Surratt would face real adversity in 2018, including a four-game suspension for selling shoes. Ultimately it was a wrist injury that would end his chances to be the starting quarterback in Chapel Hill.

We often, as sports fans, love to see how athletes bounce back from adversity. Chazz Surratt has one interesting story that tested him as a Redshirt Junior in 2019. After his struggles on and off the field the year before, Surratt would lose his starting QB spot to true freshman Sam Howell. The former Tar Heels signal-caller would approach head coach Mack Brown about a switch to defense playing linebacker. Surratt played defensive back in high school, but playing LB in the ACC against some of the country’s best players would be a challenge.

Chazz Surratt wouldn’t shy away from the spotlight in his first season as an LB for the Tar Heels. Surratt would post 66 solo tackles, which were third-best in the ACC, 115 combined tackles (2nd best), and 15 tackles for loss (6th best). Surratt would finish runner up to Isaiah Simmons for ACC Defensive Player of the Year, Simmons would go on to be a top-ten pick in the 2020 NFL Draft.

As a Redshirt Senior, he would return to North Carolina, playing in two fewer games but still posting 91 tackles, 7.5 tackles for loss, and six sacks. Surratt posted post back to back 90+ tackle seasons in his first two years playing the position. This is truly incredible and proves how good of a football player he is. In just 24 games played as a defensive starter for the Tar Heels, Surratt collected 12.5 sacks, two interceptions, two forced fumbles, and two fumble recoveries. We all know how crucial those impact plays are to scoring in IDP leagues.

It can’t be understated how important it is that Chazz Surratt knows about being an ACC starting QB. The ability to bring that understanding of the game to the defensive side of the ball is priceless and a big reason why Surratt has posted back to back 90+ tackle seasons.

If you want to play at the next level, especially at the LB position, you have to be a willing tackler. Linebackers are relied on heavily around the goal line. It wouldn’t seem a former QB turned LB would be so willing to do this, but Chazz Surratt has. One of the more underrated parts of Surratt’s game is his ability to find the ball carrier in the hole and make a tackle.

This is a good trait for an LB, mostly known for his speed and athleticism.
Surratt lines up three yards off the ball in a goal to go situation. He quickly diagnoses where the play is going, navigates his way through traffic, and hits the RB for a one-yard loss.

Chazz Surratt played multiple sports in High School and played both offense and defense on the football field. There’s no denying his athletic ability. Surratt has the type of speed and ability to make a wrong step and still recover to make plays almost effortlessly. Just two years into playing linebacker, and you can see how effective he can be rushing the passer and in coverage, with NFL coaching, there’s no telling what he can become.

Still Learning The Position and Age

I’m not sold on calling his inexperience at playing linebacker a weakness, but it can be viewed as a concern. I wouldn’t expect Surratt to come in as a rookie in the NFL and post a 100-tackle season. However, he has played the last two seasons as an LB in the ACC and done well. That’s saying something.

Chazz Surratt will turn 24 this month and be one of the older Rookies in the 2021 NFL Draft. Age at the LB position wouldn’t bother me as an NFL team too much. We have seen multiple linebackers in their 30’s produce LB1 seasons. Surratt will be into his second contract well before he hits that age.

Chazz Surratt projects to be a 2nd or 3rd round pick in the NFL Draft. He can improve any defense in many ways. At his age, I don’t think he will be drafted to sit on the bench.

Dynasty IDP managers are always looking for the next great LB at a value. Surratt could be that guy in rookie drafts this year. Typically in rookie drafts, you won’t see too many LBs go before round 4. This is especially true when you have the offensive depth like what we have in 2021.

Chazz Surratt is the newer breed of NFL linebackers playing his college years at only 230 lbs. The most notable LB playing at a similar size is Darius Leonard. Leonard is arguably the most productive IDP over the first three years of his career. Chazz Surratt is not Darius Leonard, but as a dynasty manager, this isn’t a bad thing to think of when you’re on the clock in the late rounds of a rookie draft.

Three teams that could draft Surratt are the Cleveland Browns, New York Giants, and Carolina Panthers. All three teams have a lack of depth and can use a playmaker at the position. Surratt being drafted to the Panthers would be a perfect scenario for him. He would be able to play football his entire life in the state of North Carolina. Surratt playing alongside Jeremy Chinn and a talented young front four could turn him into a very productive IDP producer.

As always thank you for reading. You can find me on Twitter @Glosser13. We continue this growth of #FFIDP and in doing that we want to give you the best edge over your league mates to dominate your rookie drafts.