Does your league start defensive tackles? @DevyCramps is here to introduce you to one of the top tackles in the class, Daviyon Nixon. 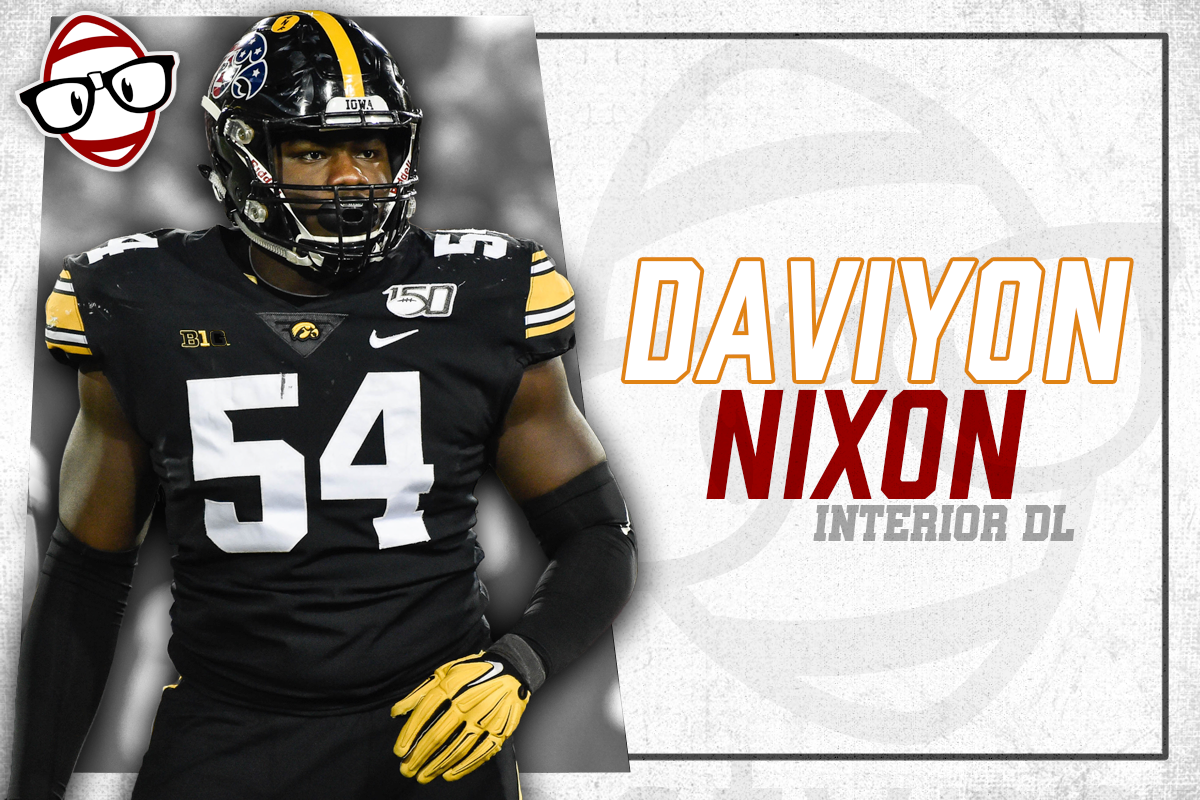 Daviyon Nixon, a defensive tackle hailing from Wisconsin, committed to play football at Iowa University in 2017. Unfortunately, he struggled with a learning disability and failed to qualify academically. He then chose to attend Iowa Western Community College, hoping to work on his grades before transferring back to Iowa. In his lone year at Iowa Western, he compiled 44 tackles and five sacks, earning a second-team all-conference selection and an offer from Alabama. However, he appreciated that Iowa had stayed loyal to him throughout the process. When he got his grades up, he chose to return to the school to which he initially committed.

Nixon was forced to redshirt a year due to NCAA transfer rules. He finally got to play football for Iowa in 2019, then burst onto the scene in 2020 as one of the top defensive tackle prospects in the class. He compiled 13.5 tackles for loss and 5.5 sacks to go with 45 total tackles – in just eight games. His performance in 2020 earned him a unanimous All-American Selection and the Big Ten Defensive Player of the Year award. He was also a finalist for the Outland Trophy, awarded to the best interior defensive lineman in all of college football.

Nixon could be taken in the first round of the NFL Draft, possibly the first defensive tackle selected. So, is he worth a draft pick in your rookie drafts? Let’s find out.

Measuring at 6’3’, 305 lbs, Nixon certainly has the size and strength of an NFL DT. What’s especially impressive, though, is his outstanding speed and athleticism at that size. Check out this 73 yard pick-six:

BIG MAN PICK SIX@DaviyonNixon shows off some moves and takes it to the house for @HawkeyeFootball 💪 pic.twitter.com/k4VIOujFwL

He shows the awareness and athleticism to leap up into the passing land and grab the ball. He then puts a move on to shake the QB and outruns everyone to the endzone. His athleticism shines through when rushing the passer or chasing down a ball carrier as well.

He is also a highly intelligent player. His instincts are often correct, and he is able to blow up plays as a result. Watch him read this sweep like a book and earn a big TFL:

His agility and excellent hand usage make it very difficult for opponents to get a hold of his chest. He uses these traits to blow by linemen with ease and get to the ball carrier. Here, he sets up an outside release, forcing the lineman to widen. Then he quickly jumps inside, coupling it with a swim move to use the lineman’s momentum against him. He then shows off his speed and athleticism again, getting to the QB and making the tackle against a more mobile player.

Between his IQ, athleticism, and hand usage, Nixon has the makings of one of the top young defensive tackles in the league.

One of Nixon’s main weaknesses is that he fails to maintain leverage consistently. He tends to stand upright at the snap, not keeping his pad level low. The lowest man tends to win in the trenches, so Nixon will need to learn how to keep his pads low if he wants to contend with the bigger, stronger offensive linemen in the NFL.

On top of that, he is not particularly explosive and is a little slow to react to the snap. This makes it difficult to see him racking up high sack totals. QBs will often get rid of the ball before he gets there. In run defense, he can at times be slow to disengage and get to the ball carrier, allowing them to gain extra yards before making the tackle from behind. He also can be found over pursuing the runner.

Some of his issues are certainly coachable, so I am comfortable projecting him as one of the top defensive tackles in this class despite them. His ability to read and disrupt plays should keep him on the field, but he will need to improve on his weaknesses if he wants to become one of the premier tackles in the league.

Nixon is unlikely to be selected in a lot rookie drafts, particularly since most IDP leagues start defensive linemen as a group rather than separating tackles and ends. While he could be the best defensive tackle in the class, he simply doesn’t have the pass rushing upside to be taken before some of the defensive ends. That said, if your league starts defensive tackles and has a deep rookie draft, Nixon is definitely someone to watch out for in the last couple rounds of your draft.

2021 Rookie Player Profile: Justin Fields – Quarterback
Is Will Fuller V a Fade in 2021?