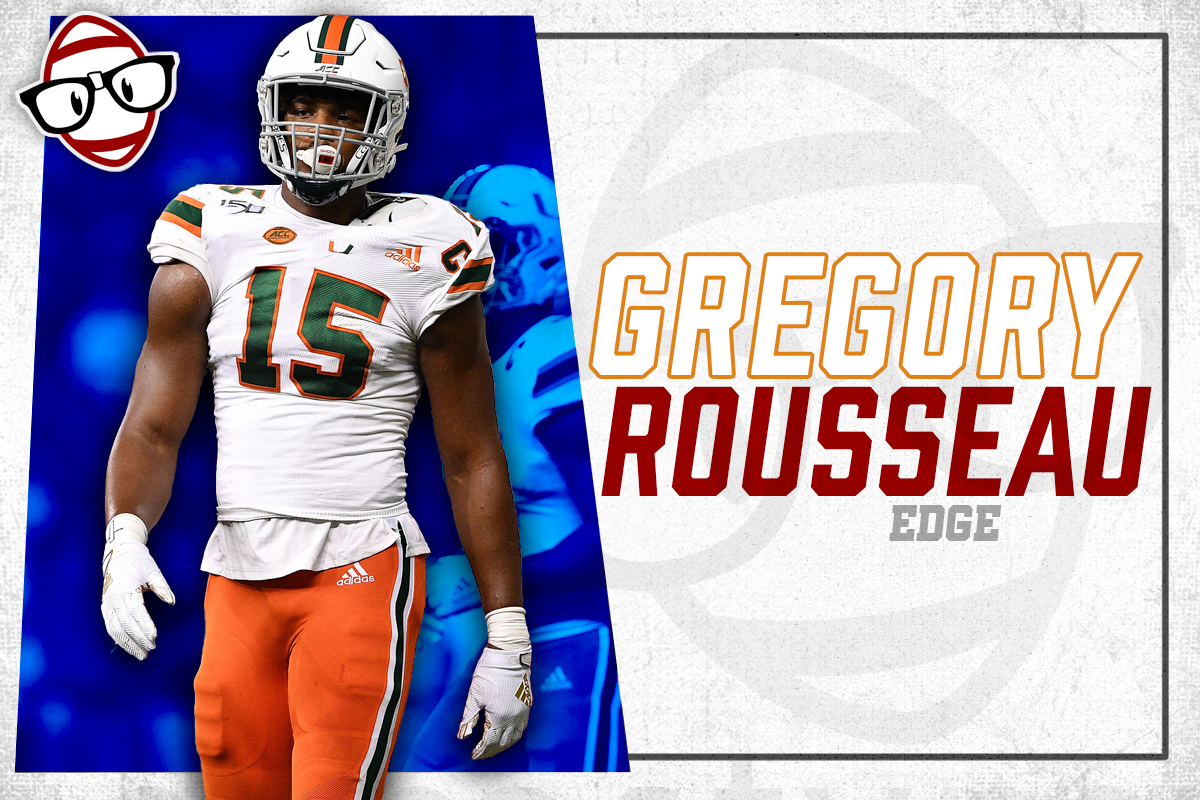 Gregory Rousseau is a native of Coconut Creek, Florida, who played his high school football at Champagnat Catholic in Hialeah, Florida. Rousseau played both wide receiver and free safety at Champagnat Catholic. He was recruited as a three-star ATH, according to 247sports.com. Rousseau committed to the Hurricanes, although he had offers from LSU, Oregon, and USC. Rousseau posted 75 tackles and ten tackles for loss as a high school senior while also catching five passes for 43 yards and three touchdowns.

Gregory Rousseau would draw praise from Hurricanes Head Coach Manny Diaz in spring practice in 2018. Unfortunately, he would only play one game as a true freshman recording five tackles before missing the rest of the season to an ankle injury.

In 2019 Rousseau would prove he was every bit as good as advertised when the Hurricanes recruited him. According to Pro Football Focus, Rousseau was a part-time player through his first four games, averaging just 22 snaps a game. Remarkably in those four games, he had already totaled three sacks, a forced fumble, and a fumble recovery. The Miami Hurricanes defensive end would go on to produce elite numbers recording 15.5 sacks. That was second only to Chase Young, who would go on to be the second overall pick in the 2020 NFL Draft. In 2019 Rousseau would be named ACC Defensive Rookie of the Year, 1st team All-ACC, 2nd Team All American, and Freshmen All American.

Gregory Rousseau decided to opt-out of the 2020 season due to the Covid-19 pandemic like many other high-profile 2021 NFL Draft prospects. Rousseau’s mother is a nurse who has been on the front lines dealing with this pandemic. In an interview earlier this season, he spoke to how hard it was sitting out. However, he needed to do it for his mother’s sake so he could take care of her so she wouldn’t have to work in these conditions any longer.

The one thing you can’t teach as a coach is size and overall athletic ability. This is something Rousseau brings to the table at such a young age. The ability to be taller than every offensive lineman he lines up against while also being athletic enough to beat them regularly is rare. The future 2021 first-round pick uses his size and power to put pressure on an opponent’s offensive game plan.

In just one full season in Miami, even as a rotational player, Rousseau has played snaps at Edge, 3-4 stand-up rush LB, three-technique DT, and even NT. He was able to get pressure from all of these different alignments as well. In 2019 Rousseau showed his value to NFL defenses. The game continues to change, and offenses are as dynamic as ever. It’s a breath of fresh air to have a player as versatile as Rousseau who can attack from multiple positions.

Rousseau didn’t play defensive line until he was a senior in high school. That hasn’t stopped him from turning himself into an elite player in a short time. Rousseau brings tremendous awareness as a run defender in both setting the edge and getting his hands on an offensive lineman to locate the ball and make a tackle. Rare skills to possess with just one year as a full-time college player.

Rousseau is just 20 years old, so he has plenty of room to grow, and after watching interviews with him during his opt-out, he has mentioned how hard he’s working. Rousseau is still new to the defensive line position, but he already has a variety of moves. There are plays where he seems a bit predictable in his attack, causing him to be taken out of the play.

Losing the 2018 season to an ankle injury, followed by a breakout season in 2019 just to opt-out in 2020 could concern teams. Consistency is vital in the NFL, and while the upside is tremendous, there are doubts if he can be dominant and dependable every year. At 20 years old, there’s no data to consider Rousseau “injury-prone” after one missed season with a fractured ankle. Any player with Rousseau’s size and athleticism will face injury risk throughout his career, but the ceiling of what he can become far outweighs the risk.

Gregory Rousseau is a massive human being who is just scratching the surface of how good he can be. Rousseau can be a franchise-changing player for an NFL team. There is a very good chance Rousseau is taken in the 2021 NFL Draft in the top ten. Regardless of the scheme he is drafted to, he will have every opportunity to make a difference as a rookie.

The depth of Edge position in this draft may push Rousseau down in rookie drafts due to him being the best defensive linemen not to play this season. Dynasty managers should be looking to take big advantage of this if that happens.

The two-player comparisons I keep seeing and tend to agree with for Gregory Rousseau are Jason Pierre-Paul and Danielle Hunter. It’s fair to say those may be unrealistic comparisons. Still, given Rousseau has only one football season under his belt as a pass rusher, but he’s going to be a special player.

Rousseau can fit nearly any scheme with his size and athletic ability. For dynasty owners, a 4-3 defensive end makes the most sense for his value in rookie drafts. Atlanta, Cincinnati, Detroit, or Minnesota likely give him the best chance to be a high impact player right away.

As always, thank you for reading. You can find me on Twitter @Glosser13. We continue this growth of #FFIDP, and in doing that, we want people to know the rookie season in a dynasty is about more than just the offensive players. Remember to check out Dynasty Nerds for all your IDP needs.