If you are looking for a safety that can play anywhere on defense, @ejh1528IDP shows you the upside of Hamsah Nasirildeen. 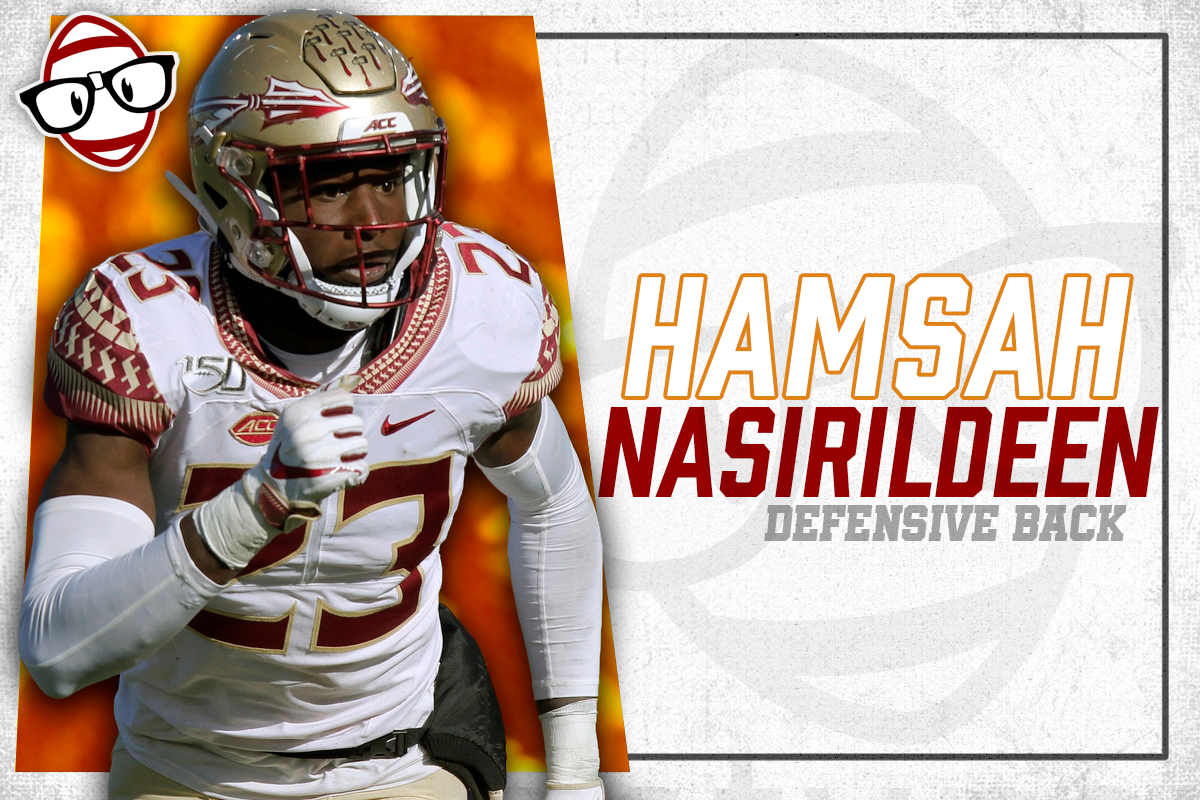 High School: Coming out of a high school, Hamsah Nasirildeen was a four-star recruit and the number one recruit in North Carolina. Nasirildeen played plenty of positions on offense and defense in high school, including linebacker, tight end, wide receiver, and eventually playing safety. He was named to the AP First Team in Florida. During Nasirildeen’s senior season, he eclipsed the 100 tackles mark (108 tackles) and added three interceptions. He racked up 752 receiving yards on 45 receptions with five touchdowns. Nasirildeen was selected to play in the U.S Army All-American Bowl.

College: He played in 13 games and started two of them his freshman year. Nasirildeen finished with 29 tackles and three pass deflections, playing on defense and dabbling on as a special teamer.

During his sophomore season, Nasirildeen put on a much better show. He finished just shy of 100 tackles, finishing at 91 while starting five of 12 games. Nasirildeen showed his superb playmaking skills with four defensive touchdowns, one interception and two pass deflections.

His junior year was his best season to this point, surpassing the 100 tackle mark, racking up 101 tackles. He didn’t have the big plays he had in his sophomore year but still had a sack, three forced fumbles, three pass deflections and two interceptions. Nasirideen failed to play the whole season due to a torn ACL he suffered against the Gators.

The 2020 season, as we all know, was cut for plenty of teams. Nasirildeen, coming off his torn ACL, played the last two games of the season with a very depleted defense. In those two games, he made 13 tackles, one pass deflection and one interception.

This is a guy that can be another chess piece on your defense. Hamsah Nasirildeen is a versatile prospect that can play anywhere on the defense and do anything. He can play in the box, drop back into coverage and play as the deep safety. Nasirildeen has excellent field vision and is a plus defender in run defense. He will spy the ball carrier and make sure he goes down.

During Senior Bowl week, Nasirildeen showed excellent coverage skills against the tight ends and running backs. Here he cuts the tight end off and comes up with the interception.

In this play, Nasirildeen shows proper tackling techniques to take down the ball carrier and even forcing the fumble. He doesn’t take very many bad angles on tackles and giving up the yards after the catch/carry

And S #23 Hamsah Nasirildeen gets started right away, popping the ball out on a beautiful downhill tackle. #Seminoles pic.twitter.com/0kXrow5B3J

When it comes to weaknesses, Hamsah Nasirildeen needs to work on coverage against wide receivers. He has decent speed but will have issues with the faster and more agile receivers.

Below, Nasirildeen shows his struggles against UAB wide receiver Austin Watkins and his quick moves. On the plus side, even though he got turned around, he kept with the receiver to attempt at making the play.

Nasirildeen will need to work on his coverage skills and polish off his ball skills and prove he can stay healthy for a full season.

After having an intense Senior Bowl week and coming off a torn ACL at the end of 2019, Hamsah Nasirildeen showcased what he can do as a football player. When it comes to fantasy, Nasirildeen could be a sleeper in fantasy drafts and could be one of the top-scoring safeties if he lands in the right spot. He will get the tackles and even get those occasional big plays and rack up your team’s points.

Thanks for reading and I hope you enjoyed the article. You can find me on Twitter @ejh1528IDP. Feel free to shoot me any IDP (NFL or Devy) questions you may have. You can check out my NFL Draft Content here and my previous Dynasty Nerds articles here. Are you a #NerdHerd member yet? For just $2.99/month, you get access to rankings, extra podcasts, the buy/sell tool, and more on the way