In this IDP Snapshot series, Jordan Rains will examine the IDP fantasy football season through 4 week quarters. Weeks 5-8 saw some breakouts and some heartbreaks on the defensive side of fantasy. 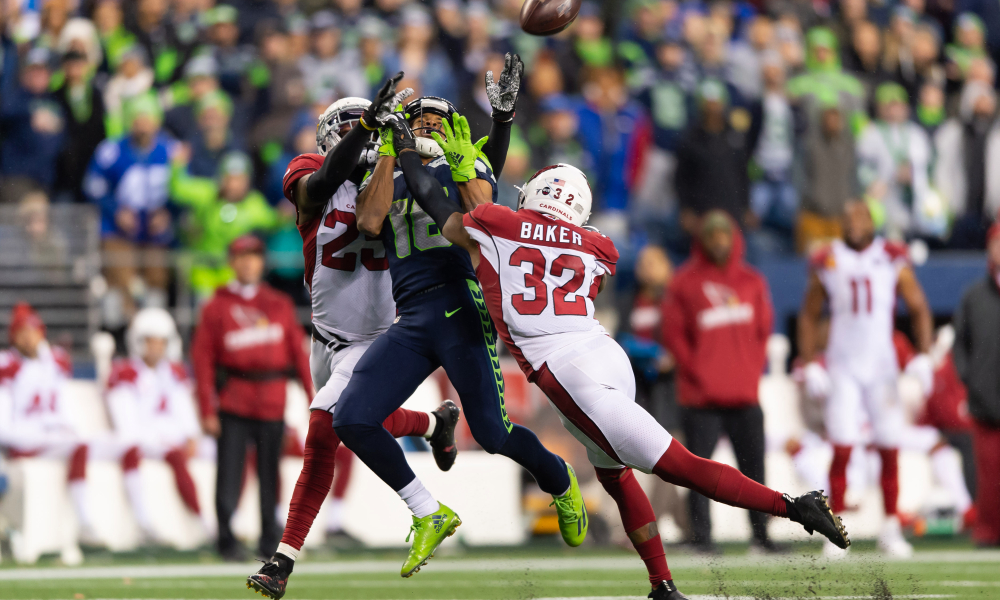 In this IDP Snapshot series, I’m going to review the fantasy season quarter by quarter and give some insights into the trends and personnel on the defensive side of the ball. As pragmatic fantasy managers, it’s important to manage your team in a micro sense (weekly) and in a macro sense (quarterly/seasonally). To do this properly, you need to step back and see relevant and available information. Assess this information within the context of your league to determine what’s actionable. Then take action.

It’s hard to believe we are already two-quarters of the way through the fantasy season, but alas, it’s true. Weeks 5-8 were exciting for IDP fantasy managers but also challenging. A few bigger IDP assets were shelved most if not all of the quarter, and managers had to put some big truss in the bench in these pivotal weeks. It’s time to sift through some of the bigger player narratives and trends as we enter the playoff push quarter of the season.

Previously highlighted in the trending down section in the 1st Quarterly Report, Lawrence seems to have turned this around. While Lawrence didn’t post a single sack the first quarter of the season, he has posted 3 since Week 5. Lawrence has also accumulated two-thirds of his total season tackles over the last four weeks with 19. Lawrence has also been good for seven total impact plays, five tackles for a loss, and two forced fumbles, in the second quarter of the season. Patient managers are finally seeing a positive return on Demarcus Lawrence, who has 92 IDP 123 fantasy points on the season and DL18 through Week 8.

In Week 7, Yannick Ngakoue was traded from the Minnesota Vikings to the Baltimore Ravens. Yannick has been putting together another highly productive season after moving from Jacksonville to Minnesota, amassing 12 solo tackles, eight QB Hits, seven tackles for loss, five sacks, and two forced fumbles through Week 6. In his first week with his new team, the Ravens, in Week 8, Ngakoue posted just one tackle and is currently DE8 on the season.

In the first quarterly report, Brian Burns was also highlighted, but unlike Demarcus Lawrence, he was in the trending up section. During the second quarter of the season, Burns posted a healthy 18 tackles, two sacks, and two forced fumbles. In Week 5 against Atlanta, Burns was on his way to a major breakout performance when he had five tackles, a sack, and a forced fumble in just 17 snaps, but a concussion forced him out of the contest early after his hot start. Burns has been trending up all season and is proving himself a proficient pass rusher on this young Carolina Panthers team.

While many may have a keen eye on Chase Young of the Washington Football Team in dynasty, they shouldn’t be overlooking his running mate Montez Sweat. Sweat was the only first-round rookie pass rusher to start all 16 games in 2019 and a breakout candidate I wrote about coming into the year. Even though he only played in three games in the second quarter of the season, Sweat still put up a healthy 13 tackles, three sacks, and two forced fumbles. In his first four games, Sweat was good for 41 points, but in Weeks 5-7, he gave managers 55 points. Don’t sleep on Montez Sweat.

After missing almost the entire first quarter of the fantasy season with a broken collarbone, Leighton Vander Esch was activated from IR in Week 6 to the surprise of many IDP fantasy managers. Originally slated to miss 6-8 weeks, Vander Esch was back in the Cowboys lineup in just a little over five weeks. Vander Esch playtime in Week 6, his first Week back was just over 50% by jumping all the way up to 97% in Week 7, which produced a 12 total tackle performance. An impressive turnaround for a player with injury concerns overshadowing his early career.

Since Week 5, Williamson has averaged an eye-popping 10 tackles per game. Williamson has also been the unquestioned starting middle linebacker for the Jets since returning to fully healthy. His arrow is pointing up, and his play has been great on the field, especially his tackling prowess, which is always at a premium in IDP fantasy football.

After another productive outing in Week 8 for the Jets, Williamson was promptly traded to the surging Pittsburgh Steelers. He should slot in immediately as a full-time starter in the void left behind by injured middle linebacker Devin Bush. In the new system, he may not be quite as efficient with his tackles as in New York, but Williamson is looking like a solid linebacker down the stretch.

Patrick Queen has been a total rookie sensation for the Baltimore Raven and IDP fantasy managers! Queen came into Baltimore and was a day one starter accumulating 35 solo tackles and 13 assists through Week 8. Queen has also been impressive with his playmaking ability blowing up for 12 impact plays! As the current top rookie scoring defensive player, Queen is solidly in the Rookie Defensive Player of The Year conversation and also in contention to finish as a Top 3 IDP linebacker as a rookie.

Considered by many, myself included, to be an NFL bust, Haason Reddick is having a breakout season in his 4th year. Reddick has been utilized differently this season than in years past, finding success as a pass rusher. In Week 5, Chandler Jones went down with a season-ending injury, which made Reddick the default pass-rushing option. Reddick has 26 tackles on the season, seven for a loss, five sacks, and three passes defended. Reddick posted a signature week winning performance for fantasy managers Week 7, accumulating 11 total tackles, including three tackles for a loss and one sack. Good for 31 points.

Jordan Fuller’s injury should reestablish his role on the field. If he was dropped in any of your leagues because of a slow start, make sure he ends up on your roster! Taylor Rapp is currently a consensus Top 25 DB at Dynasty Nerds.

Budda Baker was a massive breakout IDP star in 2019. It’s been more of the same in 2020 for the tenacious safety in the Arizona Cardinals. Baker missed Week 4 to get surgery on a thumb injury but was back in action for Week 5 without missing a beat. From Week 5-7, Baker put up an astounding 108 points and finished as the #1 overall DB in back to back performances Week 6 and Week 7. Baker has shown himself to be a solid floor player with a tremendous upside in 2020 and is on pace to finish the season with his highest number of impact plays (plays worth three or more in IDP123 scoring) to date. Baker has muscled his way into my personal Top 10 Dynasty IDP players.

In my first quarterly report, I had Harrison in the trending down section because he wasn’t getting playing time. Since then, Harrison has turned things around from an IDP perspective, having learned the scheme and seeing the field regularly. He was good for 19 total tackles, a sack, two passes defended, and a fumble recovery in Weeks 7 and 8, his first two weeks in a full-time role.

While he started the season off slowly, Jabrill Peppers has come on strong as of late. In Week 8, Peppers posted his first double-digit tackle game of the season and added two passes defended to the performance, and the week before he got home with a sack. All good signs that his early-season struggles are behind him.

One of the biggest disappointments of the 2020 IDP fantasy football season has been Dante Fowler. In 2019 Fowler had a career year with the Los Angeles Rams posting 11.5 sacks, 16 tackles for loss, 58 total tackles, and six passes defended. It was the first time Fowler had really come alive in the NFL since being drafted by Jacksonville in 2016. In eight games with the Falcons, Fowler has only managed a meager two sacks and 17 tackles. Fowler has only broken double-digit points twice this season, 10 and 11 points, respectively. That’s really bad. He is only 26 years old and has shown himself to be talented but his 2020 season seems all but lost.

Another 2020 disappointment has been Arik Armstead. Like Fowler, Armstead had a career year in 2019 with 10.5 sacks. Armstead is currently pacing for less than five sacks on the season, but his tackle floor has remained intact, at least with 22 total on the season. Armstead is missing his running mates from 2019 DeForest Buckner (who was traded to the Indianapolis Colts) and Nick Bosa (who suffered a torn ACL early in the season). With less talent around him to help produce pressure, Armsteads big-play numbers have taken a dive. Managers should adjust expectations for Armstead, who is now a low floor, low ceiling IDP asset instead of a low floor, high ceiling one.

While Winovichs needle seemed to be pointing up in the first quarter, in which he scored 2.5 sacks and 14 tackles, with ample playing time, he is currently in the doghouse. Since the bye week, his snaps have been decreasing weekly, 23, 13, and seven since Week 6. I’m not sure where the mistake was made, but he seems to have been relegated back to a mostly special teams role for the New England Patriots. Be patient because the talent is there, but the breakout is currently on hold.

Cory Littleton may be the biggest bust of 2020 for IDP fantasy football. After two incredible seasons with the LA Rams in 2018 and 2019, where he had 120+ tackles and 20+ impact plays, Littleton is currently on pace for an abysmal 91 tackles and seven impact plays. If you’re looking for a silver lining, at least things can’t get worse.

Considered by many one of the more consistent IDP options at defensive back, Harrison Smith has been lackluster in 2020. He’s scored under double digits an uncharacteristic four times through 7 weeks. Something he only did five times in all of 2019. The tackles and impact plays are all coming at a slower clip than in previous years for the Vikings safety.

Done for the Season

Hope To See You In The Playoffs

Nerd Herd, we are in the heart of the sesaon, and we here at Dynasty Nerds want to help you win your leagues! Hopefully, this article will help you do that, but while you’re here on site, take the leap and sign up for Dynasty GM today to take your dynasty experience to the next level. Also, be sure to check out the Dynasty Nerds Youtube channel where our brand new show In My Defense recently launched and covers all things IDP Fantasy Football! That’s hosted by yours truly, and if you’re looking for more IDP fantasy football content, check out my weekly podcast, Defense Matters. Mostly IDP. All Fantasy Football. I’ll be back next quarter with another IDP Snapshot until then, keep grinding!