2019 produced some strong IDP defensive lineman. @50shadesofdrunk takes a look at three of the best. 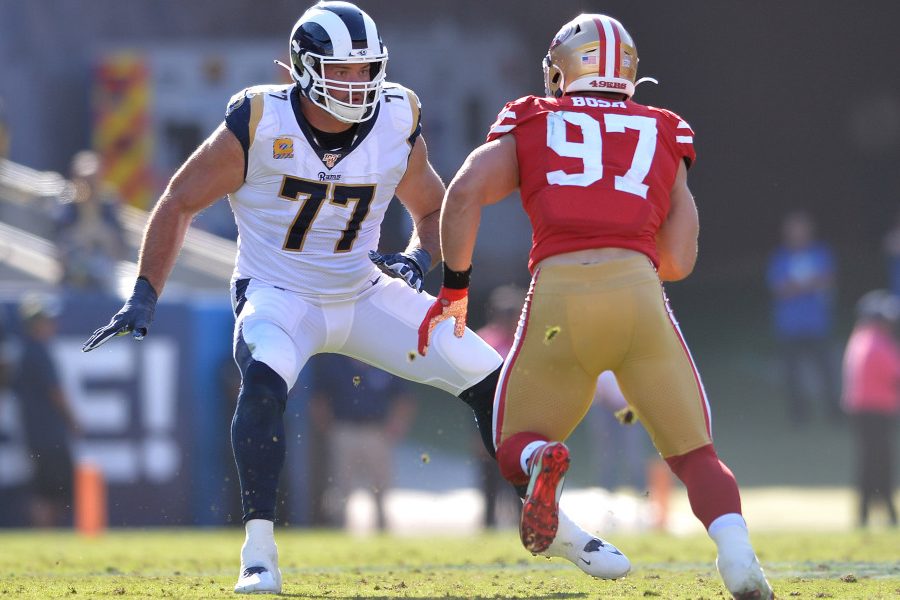 The 2019 NFL Draft class was loaded with high-level defensive line and edge rusher prospects. Whispers of an Aaron Donald clone named Ed Oliver began circulating through the Twittersphere 2 years before the draft, and Nick Bosa was a sure top 10 pick before his senior year at Ohio State even began. As the draft moved closer, more rushers began to make a name for themselves. Montez Sweat, Josh Allen, and Quinnen Williams were among the most notable. When it was all said and done, 6 DL/DE players were taken in the first 12 picks. Bosa, Williams, Allen, and Oliver were all part of that group. By the time the first round had ended, defensive linemen and edge rushers accounted for 13 of 32 picks. Many more taken throughout the rest of the draft. While there were many potentially elite IDP fantasy football options, 3 proved themselves top tier rushers right out the gates.

Here’s the guy everyone will want a piece of for years going forward. Even the President of the United States wanted a piece of that Bosa brand once he was drafted to the 49ers. Nick Bosa might be the most All American, built for the brand NFL defensive player since JJ Watt. Smile, check. College pedigree, check. Draft capital, check. A large market organization, check. Ripped, check. Good at football, hell yes.

Injury concerns aside, Nick Bosa is the whole package. He can rush the passer, he isn’t afraid to make a tackle, and he was reasonably good in coverage, especially for a rookie. And those injury concerns are precisely that, concerns. He suited up for all 16 games his rookie season and played every game in the postseason, including the Superbowl. His final stat line for the rookie regular season was impressive.

The things you like to see with Bosa from an IDP standpoint were his ability to play a full season completely healthy, and his quarterback hits and pressures up there with the league’s elites. If he can keep up the pressure rate, he should be in line for a few more sacks in 2020. Another thing that you like to see was Bosa’s snap percentage (75%), which led all rookies and was in the top 20 for defensive linemen in 2019.

I could sit here and write about how great he was and tell you to buy him, but the reality is he’s probably not for sale. He has the makings of a top 5 dynasty asset at the position for potentially the next decade. He carries enough brand equity that even your casual IDP fantasy players know he’s a valuable asset. Keep your ear to the ground for potential injury narratives or reports out of training camp. You might get lucky and get him at a discount if something like that happens.

Josh Allen was the 3rd edge rusher taken in the 2019 NFL draft behind only Nick Bosa and Clelin Ferrell. His rookie season was highly productive and highly disruptive, which is exactly why Jacksonville drafted him. Coming into the draft most draft analysts had him penciled in as one of the best prospects and a guaranteed top 5 overall pick. For whatever reason, 6 teams passed on him and Jacksonville drafted him. It ended up a good marriage overall since the Jaguar’s top 2 defensive ends had a somewhat murky future. Calais Campbell who will be 34 at the start of the 2020 season was traded to the Baltimore Ravens and Yannick Ngakoue has been franchise tagged. Ngakoue refuses to sign his tender though and is demanding a trade. While many had hoped the Jags could re-sign Ngakoue it doesn’t appear that’s going to happen. Fortunately for the Jaguars, Allen falling to them gives them options on how to best continue building this young team.

Allen rewarded the Jaguars investment with a 10.5 sack rookie season, the most among rookies. His entire season stat was, in a word productive.

An impressive line without any context but even more impressive when you consider Allen was only on the field for 60% of the teams’ defensive snaps. In most IDP fantasy football leagues, Allen finished well within the parameters of a DL2, which is an excellent return for a rookie.

The 60% of defensive snaps played will almost assuredly go up in 2020 with Ngakoue being a free agent, and Campell now a member of the Baltimore Ravens. Both Ngakoue and Campbell played more defensive snaps than Allen in 2020, as one would expect. Both were veteran leaders and proven commodities to the team. Yannick clocked in at 75% of snaps and Calais just a hair under 78%. Josh Allen is getting more playing time going forward.

When you’re looking to build an IDP roster with a rock-solid DL, you want to stock up on players who will see the field upwards of 70% of snaps and Allen being so young and so productive on limited work gives a glimpse into the upside he could possess given a 70% snap share. Don’t be afraid to be a bit aggressive if you find yourself in an IDP startup draft when it comes to Josh Allen. He should be a target and can likely be drafted at DL2-3 cost but has a reasonably realistic and straightforward path to DL1 production ahead of him.

“Mad” Maxx Crosby may go down as the steal of the 2019 NFL draft. By the time the Raiders selected Crosby in the 4th round, 13 edge rushers had already been chosen. Crosby was a small school prospect out of Eastern Michigan where he posted 70 tackles, 19 tackles for a loss and 7.5 sacks in 12 games his final year. That production was enough to put him on Mike Mayock’s radar. When Jon Gruden made the call to tell him he had been selected, he said, “..we think you’re one of the best sleepers in this draft”. He wasn’t wrong.

Crosby didn’t record a sack until his 5th career game but ended the season with 10. Second most by any rookie and one of 18 players in 2019 to reach double-digit sacks. His final season stat line was one that would make any NFL edge rusher would be proud.

His 16 tackles for a loss tied for 5th most in the entire NFL, only Aaron Donald, Shaquil Barrett, Joey Bosa, and Za’Darius Smith posted more TFL than Mad Maxx in 2019. Maxx finds himself in some elite company at a premium NFL position, and when the tape rolls, you can see why.

Crosby has a massive wingspan, which helped him force four fumbles in 2019 and defend four passes. His four forced fumbles tied him for 4th most in the league, and his four passes defended tied him for 4th most at the defensive end position. His disruptive ability goes beyond what shows up in the box score. Even when he wasn’t getting to the quarterback, he was forcing off-balanced throws and keeping them under duress. Perhaps the most telling thing about Maxx though was his end of season snap percentage, 72%. Nick Bosa was the only rookie rusher who played a higher percentage of his teams’ defensive snaps. His motor and football IQ was enough to keep him on the field at an even higher rate than fellow rookie rusher, and top 5 draft pick, Clelin Ferrell.

The ceiling for Maxx is sky high, and his personality and playmaking ability mean he’s a potential star in the making. He gives off a George Kittle vibe with his boyish enthusiasm, graceful athleticism and love of the game. It’s hard not to like Maxx and the situation he’s in going forward with the Raiders, who have been searching for an elite edge rusher since trading away Khalil Mack.

If you play in an IDP fantasy football league that offers a balanced scoring format, Crosby is a dynasty buy or hold. If you were lucky enough to acquire him cheaply in startups or maybe even on waivers, you could look to flip him. The upside is tremendous, and the kind of value proposition you look for in dynasty. However, he will be the cheapest to acquire of the three this article will highlight, if for no other reason than his NFL draft pedigree, but stands to return just as much value to your roster. As stated above, “Mad” Maxx Crosby may go down as the steal of the 2019 NFL Draft.

When it comes to building a complete fantasy football IDP roster, a cornerstone defensive lineman/edge rusher is an absolute must-have. The 2019 draft class provided dynasty owners quite a few prospects to choose from, but in year one, these three returned the most value to your roster. Looking ahead to 2020, a few other prospects from the 2019 class that had serviceable seasons and showed promise to one day be high-level assets. Look for another rookie rusher write up soon. In the meantime, make sure to follow along on Twitter: Jordan Rains (@50shadesofdrunk) for more fantasy football IDP analysis. Cheers!