n this IDP Snapshot series Jordan Rains examines the Top 10 defensive players of the 2020 season at each of the positions linebacker, defensive line and defensive back 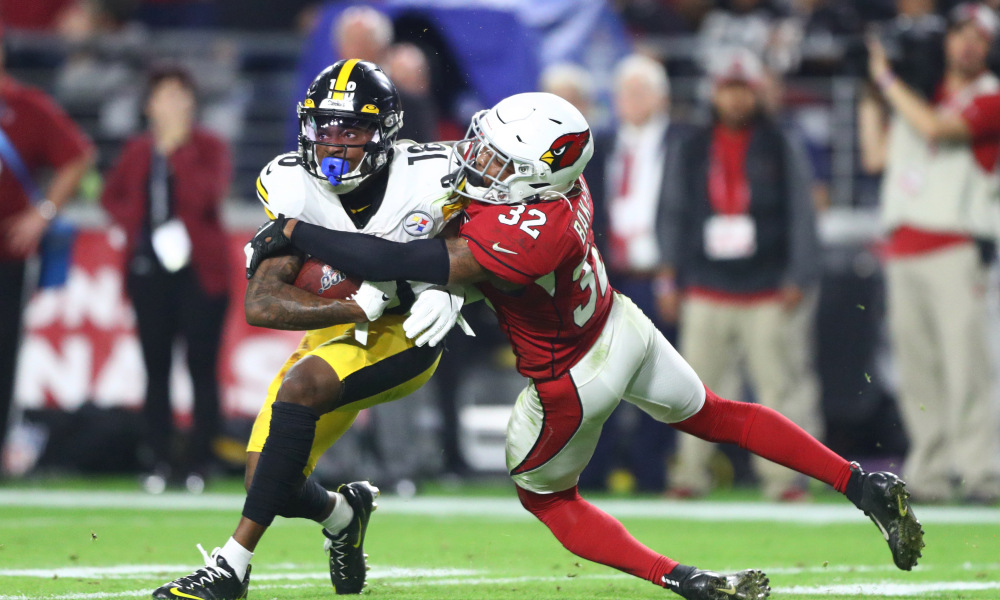 Now that the 2020 fantasy season is over, it’s time to look back and process the information 2020 gave us. This IDP Snapshot series will explore the top ten IDP fantasy football players at each defensive position. Linebacker, defensive linemen, and defensive back. Feel free to go back and read IDP Snapshot: Top 10 Dynasty LBs of 2020 but for now, let’s delve into the defensive backs! The scoring is based on IDP123 Default Scoring.

It was another prolific season from Cardinals safety Budda Baker. After leading the NFL in tackles in 2019, he turned in 118 combined tackles. Second among defensive backs behind only Jordan Poyer. Baker took a step forward as a playmaker with a career-high 18 impact plays in 2020. He’s always been a volume tackler, and there’s no indication that will change anytime soon. His signature moment of 2020 came on primetime in Week 7 when he picked off Russell Wilson in the end zone and returned the ball 90 yards, tackled by DK Metcalf just short of a touchdown. Shockingly, it was only Baker’s second career interception. His first came just a week prior against the Dallas Cowboys.

With his rock solid tackle floor, Baker should be part of the Top 3 IDP defensive back conversation for a while. But he will need to continue to improve in his impact plays before he can challenge Jamal Adams for the number 1 overall spot.

It was a tough season for the Buffalo Bills defense. Matt Milano and Tremaine Edmunds were hurt early in the season, as well as Tre’davious White. While those players still managed to turn in a few games for managers, Jordan Poyer was a weekly star for IDP managers. Highlighted most notably by never scoring below 10 points all season. He averaged 17.1ppg and had a career year tackling with 124 combined, 91 solos. Poyer has set a career mark in tackles every year since he’s been in Buffalo. He will be 30 at the start of 2021 and might be faded by some, but he hasn’t slowed down at all, and safeties can be highly productive late into their careers. Poyer sits firmly in the Nerds consensus rankings 7th amongst defensive backs.

Malcolm Butler finishing as the DB3 in 2020 is probably the biggest surprise on this list. However, it’s also something I feel like I should have seen coming. In 2019 the #1 overall DB for IDP was Logan Ryan, who played a hybrid safety/CB role for the Titans in his final season in Tennessee. In 2020 Malcolm Butler assimilated into that role on the defense and stuffed the stat sheet like his predecessor. Butler tied a previous career-high of four interceptions in 2020 as well as completely blowing away his previous career mark of 69 combined tackles by hitting triple digits for the first time in his career (100). Butler is currently the Nerds DB34, but if his role remains intact through the offseason, don’t be shocked to see his dynasty value rise as the 2021 season inches closer.

It was a three-peat for Jessie Bates in 2020. His third season in the league and his third season with at least 100 combined tackles. He took a step forward as an elite defender, excelling in coverage with 15 passes defended. For perspective, Bates had only 16 passes defended in 32 combined starts before this season. However, he has shown himself to be a dynamic playmaker on the ball, with three interceptions every year since he came into the league. He’s also seen a steady increase in impact plays from 11 in 2018, 14 in 2019, and 21 in 2020. If he can keep those numbers high, he could be one of the best young defensive backs in dynasty and is probably undervalued. He is currently ranked eighth among Nerds defensive backs.

Old man strength. Like Bobby Wagner in the previous article covering linebackers, Malcolm Jenkins is one of the league’s most respected veteran players. And he’s still playing at a high level. Jenkins turned in an eye-popping 25 impact plays. Highlighted by matching previous career highs in interceptions (3). But he stuffed the stat sheet all over with 10 PDs, seven tackles for a loss, and 2.5 sacks. At 33 years old, though, it’s hard to imagine any more than 1-2 more seasons of play from the safety, which explains his Nerds consensus ranking of DB31.

It was a fantastic rookie season for Carolina Panthers safety Jeremy Chinn. He was one of the few rookies immediately entrusted with a full-time role on his prospective defense and turned in 117 combined tackles! The Panthers boasted a top-three safety in 2019 with Eric Reid, and Chinn’s success in the role through a regime change has many fantasy managers thrilled. His rookie highlight came when he scored back to back scoop and score TDs in Week 12 against the Minnesota Vikings. An NFL record. Currently Nerds DB3.

For the second season in a row, Justin Simmons finishes as the DB7 overall. Just a funny coincidence, but it’s the kind of quiet consistency fantasy managers love about Simmons. He appeared in all 16 games in 2020, posting 77 combined tackles and 18 impact plays. Five of his impact plays were interceptions, which gives him nine combined over the last two seasons. His talent and production should continue for many years to come.

It was a poignant offseason for NFL superstar safety Jamal Adams, who was traded in the offseason from the Jet to the Seahawks for a blockbuster that included multiple first-round picks. Adams didn’t let down his new team, who took full advantage of his unique pass-rushing skillset. In 12 games, Adams broke the NFL sack record by a defensive back, turning in an astounding 9.5 sack campaign while averaging 4.9 solo tackles a game! This, after many called for his usage as a pass rusher to be short-lived after a six sack campaign in 2019 in 14 games. Adams also turned in a career year in tackles for a loss in the abbreviated season. Adams is set to undergo offseason surgery on his shoulder, which was injured down the stretch of the season. He’s the NFL’s most unique defender and currently sits atop the Nerds DB rankings as the DB1.

It was an all-around stellar year for Marlon Humphrey, cornerback for the Baltimore Ravens. Right before the season started, Humphrey signed a five-year contract worth up to $97.5 million, then went out and balled out. He appeared in 15 games and went off for career highs in sacks (2.5), tackles (82), and forced fumbles (8). His eight forced fumbles lead the NFL and are an incredible feat from a cornerback. Especially with guys like Myles Garrett, TJ Watt, and Aaron Donald in the league. He’s currently ranked as the Nerds DB30, but I anticipate he will rise throughout the offseason.

It was a breakout season for Colts defensive back Kenny Moore. He posted career-best in several plays, including solo tackles (68) and passes defended (13). He also managed to pick the ball off four times and compiled a total of 24 impact plays. Impressive from the up and coming corner who currently ranks as the DB24 in the Nerds consensus. Darius Leonard finished as a Top 12 linebacker in 2020. Kenny Moore joins him from the ranks of the defensive backs. Was there also a defensive lineman from the stellar Colts defense to finish as a Top 12 IDP player at his position? Be sure to check out the final article.

The defensive back position is considered by many a fraught and unpredictable landscape. There is a certain degree of truth in this commonly held belief, but high-level consistency DOES exist. And the peace of mind that comes with having a player like Jessie Bates or Budda Baker as your DB1 makes them highly coveted IDP dynasty assets. It makes sure your roster has a foundational defensive back and reap the rewards.