In this IDP Snapshot series Jordan Rains examines the Top 10 defensive players of the 2020 season at each of the positions linebacker, defensive line and defensive back. 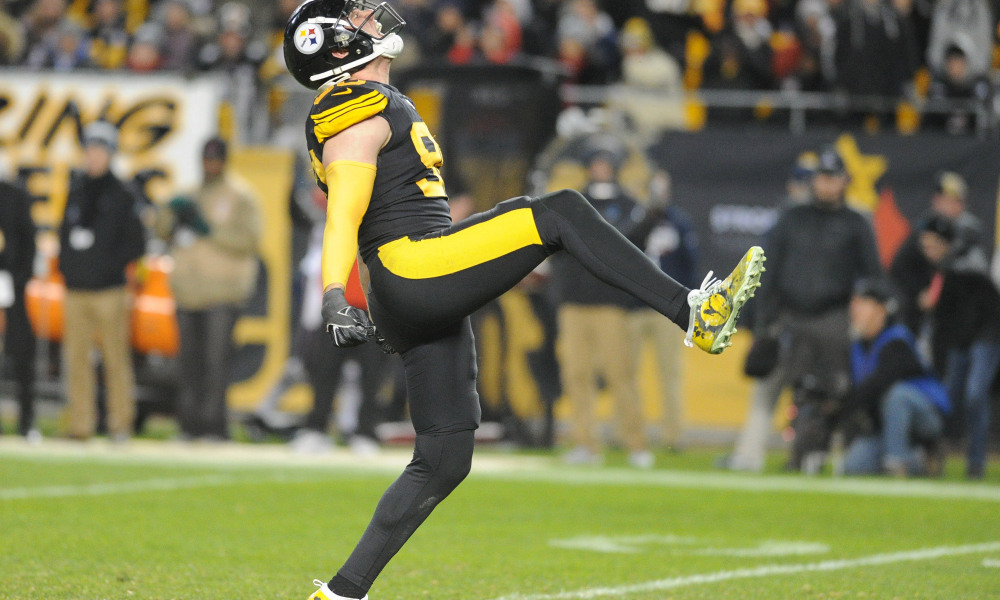 Before we dive in, it’s important to note that some of the players we will talk about as defensive linemen may be designated solely as linebackers in your fantasy platform. The ESPN Fantasy Football app and the Sleeper app, two of the more popular fantasy platforms, have all of the players listed below either as defensive linemen or edge defenders. We will use those platform designations for the scope of this article.

It was another banner year for TJ Watt. Since entering the league, he has been one of the most formidable defenders all around. As a pass rusher, he’s already solidified himself in the top three conversations. Boasting gaudy pressure numbers and the sacks to back them up. He led the NFL in sacks (15) and tackles for loss (23) in 2020. Both also career-best for Watt, while only appearing in 15 games as he rested Week 17 as the Steelers had already secured a playoff berth.

The boom or bust narrative often flippantly associated with pass-rushing outside linebackers doesn’t apply to Watt. Excluding his rookie season (2017), he averages 3.7tkl/gm, 2.7 solo, and one assist, 0.9sk/gm, 1.9 impact plays/gm, 2.08QBH/gm. That equates to 21 points per game. He posted 33 impact plays in 2020, an elite number. Watt can score all over the field year in and year out. A particularly potent skillset is his ability to defend passes. He’s batted seven or more passes in three of his four NFL seasons. You love to see it.

Za’Darius Smith has put together two tremendous back to back seasons with the Green Bay Packers. In 2019 he had 13.5 sacks, and in 2020 he finished with 12.5, which tied him with Haason Reddick for 3rd in the league. Smith has also shown himself to have a relatively high tackle floor in a full-time role with 50+ combined tackles in each of the last two seasons. To go along with the sacks, Smith also turned in 20 impact plays, highlighted with a career-high four forced fumbles. At 28 years old, he’s broken out as one of the league’s most skilled edge defenders.

Great players always find a way to win, and that’s what Aaron Donald did, yet again in 2020. Donald turned in his 4th consecutive season with double-digit sacks with 13.5. That number tied him with Trey Hendrickson (13.5) for second-most sacks in the league. Behind only TJ Watt. Donald is known as one of the league’s most consistent disruptors and proved to be so once again in 2020 with four forced fumbles. He hit that number once before in 2018, and in 2017, he did his best work with five forced fumbles. It is pertinent to note that Donald did post a career-low 14 tackles for loss. Quite the fall from his career average of 20 before 2020.

Ultimately the double-digit sacks from Donald, in a season where defensive lineman sack production was down across the board, proved to be enough to offset the missing TFL production. Donald finished the year with 18 total impact plays.

It’s been an extremely fun season for Tampa Bay Buccaneers fans. They got Tom Brady, and they’re just a few days away from playing in the Superbowl. In 2019 the defense was really, really good, but with Jameis Winston under center, it was hard for them to get the credit they deserved because the offense was constantly putting them in bad positions. Jason Pierre-Paul played in all 16 games in 2020, and he once again proved to be one of the league’s best edge defenders. JPP posted 21 impact plays in 2020, highlighted by a career-high four forced fumbles and an eye-catching two interceptions. Those are high leverage impact plays! JPP also came through in the sack department posting 9.5 sacks. I wouldn’t hate to see him win another ring.

DeForest Buckner is one of the NFL’s most underrated defensive players. Buckner is consistently putting up high tackle numbers and getting to the quarterback from the interior defensive lineman position. 2020 was no different for Buckner, who recorded 58 combined tackles, 37 of those solo, which tied him for second-most solo tackles at the DL position. And it was a down year for Buckner in the tackle department. This was his first year going under 60 combined tackles since entering the league. Buckner also came through for his IDP fantasy managers with 9.5 sacks, the second-highest mark of his career. In all, he appeared in 15 games, had 17 impact plays, and was a Top 5 IDP defensive linemen. The change of scenery from San Francisco to Indianapolis didn’t slow down one of the NFL’s most consistently productive IDP fantasy football assets.

It was a late-career breakout year for former NY Jets Top 10 draft pick Leonard Williams. After a very underwhelming start to his career with the Jets, Williams was traded to the Giants midway through the 2019 season. The trade and new team proved to be exactly what Williams needed as he went on to have an incredible season, being one of only ten players to break double-digit sacks (11.5) in 2020. For perspective, Williams only recorded half a sack in all of 2019! Williams also garnered 16 impact plays in 2020 and had 30 QB hits. His arrow is trending up majorly after being left for dead by many IDP managers. I anticipate the Giants will want to extend the former 1st Round pick in the offseason and keep together the solid defensive unit they’ve built.

Myles Garrett and the Cleveland Browns made headlines in 2020, and this time they were for the right reasons. Garrett and Baker led the Browns to their first playoff berth in almost two decades. Their first playoff win in even longer. He appeared in 14 games, missing two due to COVID. Garrett said after the season, he never felt fully recovered from COVID, sapped of energy, and winded down the stretch. He still had an impressive season posting 18 impact plays, including ten tackles for a loss and four forced fumbles. Garrett also managed to break double-digit sacks for the third consecutive season. Garrett sits firmly atop the Nerds consensus DL rankings as the unquestioned king with his contract extension already in place.

While Chase Young is the big-name defensive lineman on the Washing Football Team, Montez Sweat reigned supreme when it came to fantasy points. Sweat took a significant leap as a second-year player, increasing his impact play total from 12 as a rookie to 22 in his sophomore run. He played in 16 games posting nine sacks, 12 tackles for a loss, and six passes defended.

Sweats long arms and knack for batting balls is a sneak impact play skillset I love to see in a defensive lineman. Of his 6 PDs, three of them directly lead to interceptions. Sweat batted one ball up and intercepted it himself for a touchdown in Week 12 against Dallas. The next week he batted three passes, one of which Jon Bostic intercepted. In Week 15, he defended a pass by Russell Wilson that was intercepted by Da’Ron Payne. His stock is up big after a monster year two.

Hopefully, you didn’t fade J.J. Watt too much coming into 2020 because of the injury concerns because he threw together an impressive 26 impact play, 16 game season. Watts was always one of the NFL’s leaders in TFL and was again in 2020, posting 14. That tied him for 4th overall with the likes of Aaron Donald and Maxx Crosby. He was down at a very low number of sacks (5), but that can probably be attributed to him being the most double-teamed player in the NFL in 2020. It was probably Watt’s final season in a Texans uniform as the team continues to deteriorate rapidly from the inside out. Watt’s still a major disruptor in the NFL, and this Steelers fan is dreaming of a world where big bro unites with his little bros in Pittsburgh to finish out his career.

Like Montez Sweat, Brian Burns has quickly ascended in his second season in the NFL to one of the most productive pass rushers in the league. Burns turned in 58 combined tackles, 15 impact plays, and nine sacks finishing as a top ten defensive lineman in just his second season. While his impact plays weren’t as high as fellow second-year standout Sweat, Burns put up elite tackles numbers for a DL player with 58 tackles. Look for Burns to continue to progress in year three on a fast, young Panthers defense. Burns will be a top 15 IDP defensive lineman asset for a long time.

The defensive line position can be tricky to navigate. And there are various ways to do so, from streaming to stocking up early on talent. No matter what your personal thoughts are on it, it always feels good to have a top tier defensive lineman leading your IDP dynasty team.