In this IDP Snapshot series Jordan Rains examines the Top 10 defensive players of the 2020 season at each of the positions linebacker, defensive line and defensive back 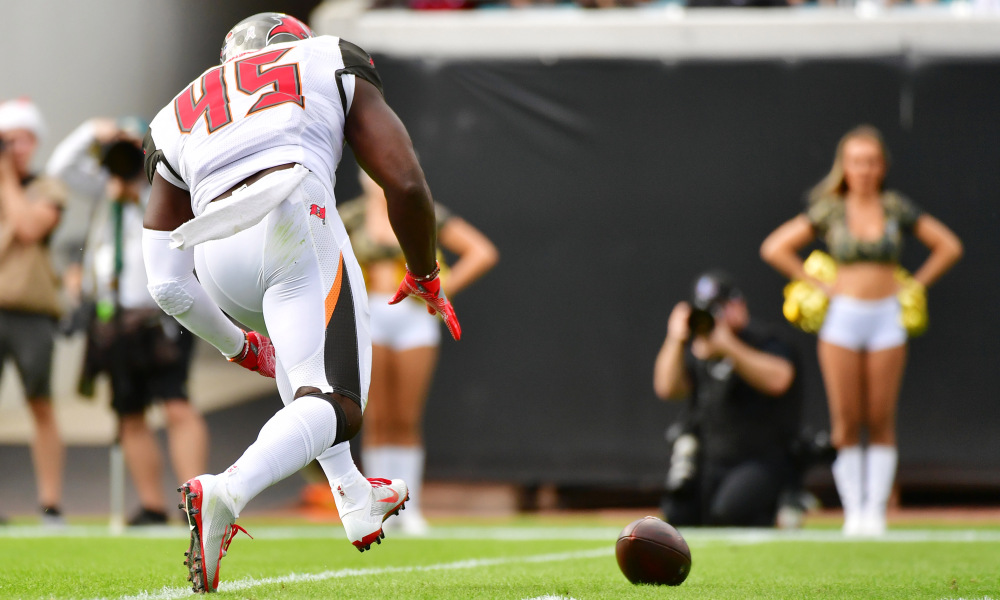 Now that the 2020 fantasy season is over, it’s time to look back and process the information 2020 gave us. In this IDP Snapshot series, we will explore the top ten IDP fantasy football players at each defensive position. Linebacker, defensive linemen, and defensive back. Let’s start by looking at the top ten linebackers of 2020. The scoing is based on the IDP123 format.

Devin White enjoyed a massive breakout season in 2020. He finished the season fourth in combined tackles (140), third in solo tackles (97), tied for third for TFLs (15). All while only appearing in 15 games. He missed Week 17 against the Atlanta Falcons with the COVID IR designation. White cashed in 30 impact plays in his sophomore campaign, highlighted by an explosive nine sacks. That’s the second most impact plays of 2020 behind only TJ Watt and Roquan Smith. He’s currently the Nerds consensus LB2.

They have a legitimate monster in the midway in Chicago, and his name is Roquan Smith. In his third season, Smith blossomed. He played in all 16 games and tied with the most impact plays of any defender in 2020 with 33. To go along with the playmaking upside, Smith enjoyed a career year in tackles with 98 solos (2nd) and 139 combined tackles (6th). Smith also posted the second-most tackles for a loss in the league in 2020 with 18. His signature performance of 2020 came in Week 10 against Dalvin Cook and the gritty Minnesota Vikings. Smith posted 14 total tackles, three for a loss, and also scored a sack. Good for 35 points.

Houston linebacker Zach Cunningham got paid in the offseason and proceeded to turn in 164 combined tackles on just 944 defensive snaps. That’s an elite tackle rate of 17%. Probably not repeatable, but Cunningham did have a 15% tackle rate the season before. Tackles are how Cunningham produced most of his fantasy points, posting a meager 13 impact plays all season. Three of those were sacks, though, so that’s always nice. Get used to seeing Cunningham’s name in the top 12 IDP linebacker conversation for the foreseeable future.

Blake Martinez continues to be the model of consistency, posting back to back 150+ total tackles and putting together his fourth consecutive season with 144 or more. There was some concern that the move from Green Bay to New York would hurt his production, but it was, in fact, just the opposite. Martinez enjoyed a career year in total tackles with 155 and managed to do it all while being banged up down the stretch with a neck and ankle injury. Martinez has now finished as a top ten LB each of the last four seasons. Top five in 2020, 2018, and 2017.

It was a career year for TJ Watt, highlighted by First-Team All-Pro honors, as well as taking home the 2020 sack title with 15 sacks. Watt has likely earned himself a very lucrative contract in the coming offseason, which should tie him to the Pittsburgh Steelers for a long time. Watt’s 33 impact plays were tied for first with Roquan Smith. Twenty-three of those were tackles for a loss, another title he took home in 2020. He also had his third season with seven or more passes defended. Excluding his rookie season (2017) has averaged 3.7 tackles/gm, 2.7 solo and one assist, 0.9 sacks/gm, 1.9 impact plays/gm, 2.08QBH/gm ~21ppg. And you can fade the “boom/bust” narrative. He’s only scored fewer than ten points four times since the start of 2019. A true impact player all over the field.

Probably the most underrated IDP linebacker on this list is Joe Schobert. Playing on the Jacksonville Jaguars will do that to a guy, though. Schobert finished 2020 with the fourth-most combined tackles (141) and 19 total impact plays. It’s his third season as a top ten LB in the last four years (LB3 in 2019 and LB7 2017). He appeared in all 16 games and posted back to back muli- interception seasons with four in 2019 and three in 2020. He’s perennially underappreciated and underrated, but his big contract ensures his role in Jacksonville remains intact. Currently Nerds LB12.

While the tape will tell you Jaylon Smith struggled in 2020, dynasty managers couldn’t be happier about his production. He finished second in the league with 154 combined tackles, 89 of those solo, both career marks. It was his fourth straight season of playing in all 16 games and his third straight LB1 finish. It was a quiet season for Smith in terms of impact plays, posting only 15. That’s a career-low after taking over as a starter. In 2018 he had 19 impact plays, and in 2019 he posted 22. With Dan Quinn recently hired as the Cowboy’s new defensive coordinator, I anticipate a career year in impact plays from Smith to go along with his stellar tackle numbers.

There are few players as tried and true as Bobby Wagner. He’s the IDP equivalent of Julio Jones. You know exactly what you’re going to get, and you know you’re going to like it. Wagner appeared in all 16 games in 2020, amassing 19 impact plays and his fifth consecutive season with 130 or more total tackles. A truly remarkable feat of consistency. He will be 31 for the 2021 season and, as an aging asset in dynasty, can probably be acquired as a discount by a win-now team in need of reliable linebacker production. It’s worth noting 2020 is the first season since 2015 he wasn’t selected as a First-Team All-Pro.

Another season, another dominant showing from Colts linebacker Darius Leonard. It was a slow start to the season for Leonard, who posted 15, 16, and 21 point games the first three weeks of the season. He then proceeded to get hurt early in the game Week 4 and was forced to sit out of Weeks 5 and 6. It was rough, but he rewarded the faithful when he surged back in Weeks 8 and 9 with 28 and 32.3 point games. Leonard remained hot down the stretch and finished firmly as an LB1 despite the missed time. Leonard appeared in 14 games but truly only played in 13. He finished the season with 132 total tackles and 22 impact plays.

It finally happened. Deion Jones got his mojo back in a big way in 2020, finishing as an LB1 for the first time since 2017. Jones made his hay as a true impact player posting an imposing 25. He enjoyed some pass-rushing success in 2020 with 4.5 total sacks, a career-best. It was good to see Jones put together back to back fully healthy seasons. Injury has prevalent throughout his career, but that appears behind him now. It’s a funny tidbit, but it was the third season in a row that Jones has scored a defensive touchdown, and he has five defensive touchdowns in his five-year career.

The linebacker position is the cornerstone piece to any IDP fantasy football dynasty team. While tackles are the baseline of all fantasy production, it’s the Impact Players who most often possess the highest probability to finish at the top of their positions. If you are lucky enough to be the manager of Devin White, Roquan Smith, TJ Watt, or Darius Leonard, you have that cornerstone piece.

Does Cam Newton have a future as a starter in the NFL?
Way Too Early: 2021 Rookie RB Landing Spots