@DynastyNuke continues his research on the hit-rate of rookie picks in your IDP league. In Part 5 we focus on the QB’s, LB’s, 3rd-Round RB’s, and Day 2 DT’s. 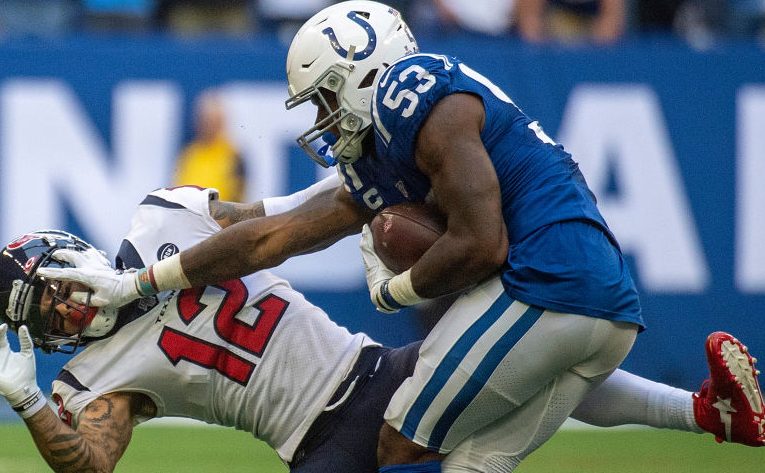 It has been a remarkable journey so far in this in-depth look into Rookie Picks that produce a top 24 finish.  We have explored strange new data sets, sought out new strategies, and boldly gone where no one has gone before!  That may be a little hyperbolic, but I haven’t read any articles with this type of data in them, and if you are still reading, then I doubt you have either.  I’m sure it’s out there.  Solomon did say that there was nothing new under the sun.

What We Have Learned So Far

2. Establish player values based on those nuances (I use VORP)

4. Do not ignore 1st-round CB’s in CB required leagues

Before we get to the third tier of players, especially the heated section on Wide Receivers, remember this is IDP strategy.  You may forget this sentence when you get to the WR’s.  Don’t freak out!  I will repeat this sentence later to remind you.

Remember that QB and TE are counted as a top 12 and not a top 24 finish.  The data (since 2012) tells us that half of the round 1 Quarterbacks will see a top 12 year.  Not bad, but look at the multiple top finishes.  1 in 4!  In Dynasty, I am looking for long term sustainable value, and 1 in 4 isn’t a sure thing.  Owners often draft QB’s in the second round of single QB leagues.  The 2020 NFL draft produced Joe Burrow, Tua, and Justin Herbert in the first six picks!

Which one of these QB’s will be your round 2 pick?  Here is a look at the QBs of the last nine NFL drafts.

The above chart illustrates that only one draft class has seen more than one QB string together top 12 finishes.  I think we will see Lamar and Kyler put it together in 2020.  Please absorb this information in single QB leagues.  This chart doesn’t look all that different from the one I shared in part 3 of this series.  That chart was about Cornerbacks!

I am not a bold take kind of person; I like data!  My strategy for the QB position, going forward, will be to poach the guys that I like, who don’t show in their first season.  If they don’t show in their second season, then I just drop them.  Here are guys I would have following that type of strategy.  To be transparent, I like these guys because I am a devoted disciple of @MattWaldman and the RSP.  So before you think, yeah, right, hindsight is 2020, I have made these trades in the past based on his analysis.  Although a good friend of mine would let you know that I gave him Lamar last year and didn’t follow my advice!  Shout out, Steve!

So far, that would be a 60% hit-rate on the second-season starter value, including five top-six finishes!  On the flip side, that would mean that I missed out on Andrew Luck and Kyler Murray.  But I wouldn’t have wasted picks on all of the Cleveland Browns’ mistakes.  Sorry @DynastyRich, I am not a Baker fan.  This year I would be trying to acquire Dwayne Haskins as a possible long-term starter. It’s a bold strategy, Cotton.  It makes me want to package deals to get one of the true greats for the rest of their career after the rookie draft.  Rodgers is pretty cheap right now.

Linebackers Are Hit and Miss

We now move on to the “stalwarts” of IDP.  These guys are over-drafted in every league!  Please take the time to digest the chart below.

Two things to take away from this chart; first, they may have been drafted as an LB, but that doesn’t mean they stayed one.  A big reason I am starting to consider the EDGE position in my leagues.  Second, when one of these guys hits, they string top 24 seasons together and become dynasty gold.  But I don’t think the “cheat code” is in the draft.

Again, I would instead poach these guys from someone else’s roster or pick them in the 4th-round or later in my rookie drafts.  If they hit in their first or second year, keep them, and bare-knuckle fight anyone who offers a trade!  If they have a top 24 finish in their rookie season, acquire them!  You hope that uncertainty in repeat-ability lowers their value enough that you don’t have to sell your whole team.  But, get them on your side!  Target Devin White, Montez Sweat (DE), and Rashan Gary now!  Give your firstborn to the Devin Bush owner if you can.  He probably won’t accept it, so use threats.

No different from the first-rounders; however, you may be picking them in the 4th and 5th rounds or off of waivers.  Perfect bench stash.  Remember, if they don’t hit in their rookie/sophomore season, drop/trade/forget about them.

The only guy on this list that I would have been pissed about is Benardrick McKinney, and he’s been a decent LB3 to have on the bench!  Go out right now and try to find Jhalani Tavai (hint – check the waiver wire) and stash him on your bench.  If he has a top 24 season in 2020, he’s a permanent player on your team.  Also, trade Zach Cunningham if you still have him.  Historical data is weighed heavily against him having multiple top-24 finishes.

Back to the Offensive Players

We finally get to the position that boggles my mind!  The first-round WR.  To be honest, I was blown away by this data, and very glad I put in the research time.  First, let’s bust the myth that it takes three years for these guys to mature.

Almost every multi-top 24 sees a top 24 by their second season.  Take a look at the next chart.

Robert Woods and Davante Adams are the only players banking top 24 finishes that did not see them in their 1st two years.  Everyone else was a fantasy starter in their first two years.  Even the third-rounders prove their worth at least once in the first two seasons.

It is essential to understand what I am trying to say here.  Wide Receivers are very important for your dynasty roster.  They have longer careers than RB’s.  Also, a couple or 3 top 24 WR’s on your team is terrific for their point contribution and their trade value.  But there is a ton of data that suggests that we are over-valuing the position in Dynasty. Take a look at this excellent series from @Stathole_Jeff. He does a great job of explaining the positional value of Wide Receiver.

Here are WR names that have been going in the first round of rookie drafts this year: CeeDee Lamb, Jerry Jeudy, Jalen Reagor, Justin Jefferson, and Henry Ruggs.  Brandon Aiyuk is missing, but that list represents day one WRs.  Based on historic trends, the most likely projection is three of these guys will have a top 24 finish during their entire career.  Now I will concede that this could be an outlier year like 2014.  All five of those fellas saw Top 24’s in their career.  But this could also be a 2012 or 2016 draft class.  I am sure it is probably somewhere between those two numbers.

Regardless, I have stuffed this data in my toolbelt, and until there is a new trend, I will confidently focus on Day 1 and early Day 2 Running Backs with my first round Dynasty Rookie picks.  How will I acquire my WRs?  It won’t be cheap, but I will trade hard for them.  Once I have that guy on my team, I will not let him go until his career is over!

On a lighter note, the third-round Running Backs are an excellent opportunity for value in your 2nd and 3rd rounds of rookie drafts!

The above chart shows that they are very comparable to the day-one Wide Receivers!  David Johnson, Tevin Coleman, Alvin Kamara, James Conner, and Kareem Hunt came from this group.  There are plenty of misses in this group too, so if you don’t see a top 24 finish in their first year, I recommend moving on.  With that strategy, you would have only missed out on James Conner and Tevin Coleman.

The reverse is also true.  If they don’t hit in their first season, move them on to avoid roster clogs.  But don’t forget their names!!  Kenyan Drake was one of these guys and saw a career resurgence later in life.  However, it took a new team for him to see that resurgence.  Watch for these guys going to new situations where they are an injury away from seeing starting time.  Just remember, they will be supplanted by a higher draft pick eventually.  Use them a year and then trade them before the next draft.

There are better than average hit-rates in this group of players.  But they are only worth digging into when you play in the appropriate type of league.  No real, sustainable value in DL combined leagues.  But in my favorite leagues, there are target worthy players.  Notice I didn’t say draft worthy?

There is not a lot of 1st season success.  The guys I will target need to see a top 50 season in their first season.  If that happens, I will try to stash them on my bench and see what happens in their sophomore season.  If it’s a top 24, then great!  I’ll keep them!  They may not be starters for me, but they do provide top-36 value.  All the rest will be ignored and removed from my bench to clog someone else’s roster.  In this range, players include Kawann Short, Johnathan Hankins, Timmy Jernigan, A’Shawn Robinson, Jarran Reed, and Dalvin Tomlinson.  Great players to have had on my bench!

Remember that we are only discussing IDP strategy here.  I am not advocating that you ignore WR in your vanilla rookie drafts.  However, I will be lowering them in my rookie rankings from here on out.  The Running Back rookies just see a lot more success and I need to take advantage of that success.  If you find yourself overwhelmed by the content of the last few articles, don’t worry.  I plan on wrapping up this series in the next article with a summary of our study.