@DynastyNuke wraps up the IDP value series with a significant shift in IDP startup strategy. 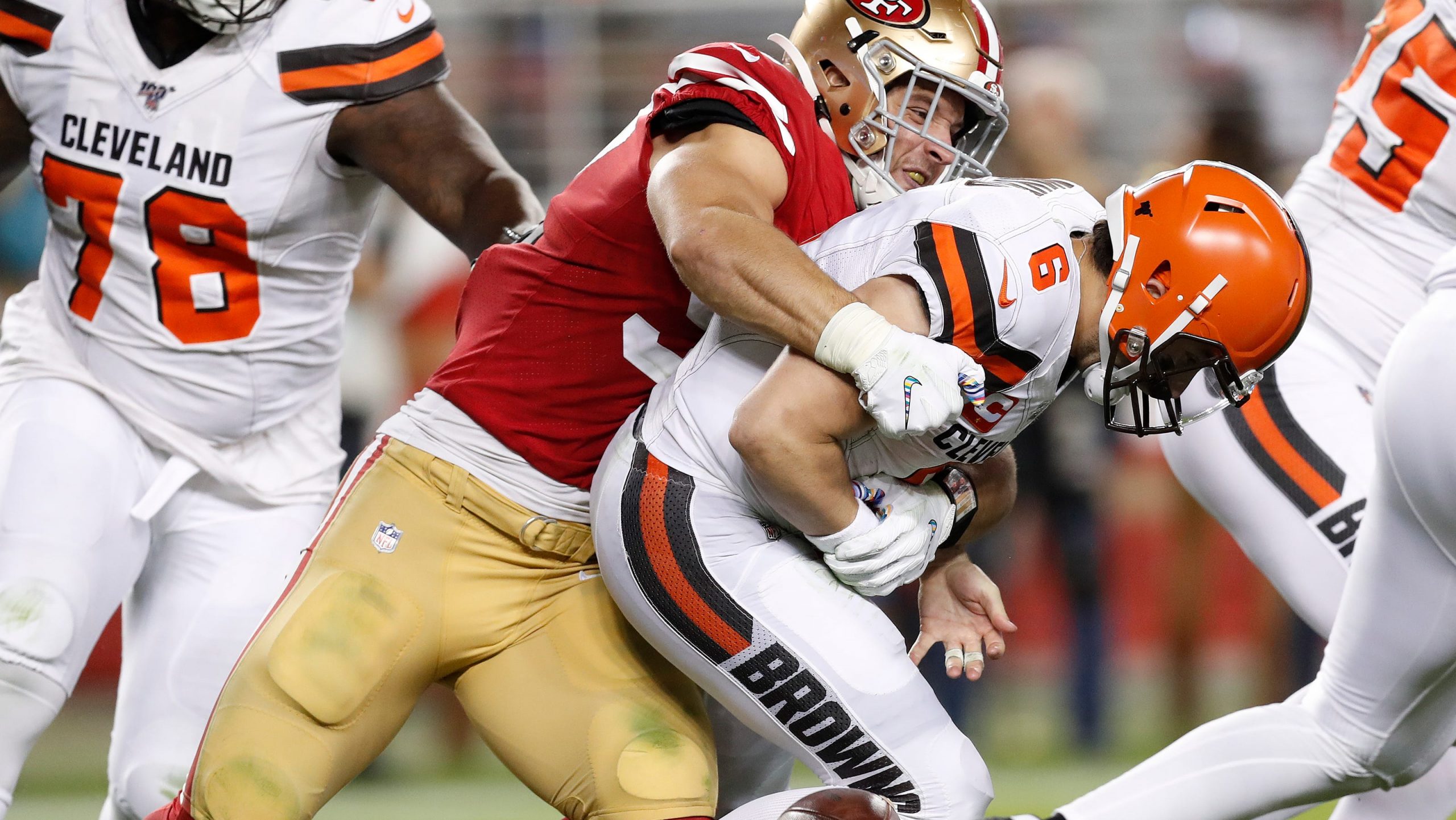 Welcome to the final issue of the IDP Value series.  Thank you so much, fellow traveler, for accompanying me on this dangerous trek through the galaxy of collective wisdom and common sense.  This study has been about discovering the value of IDP players and utilizing that value to make informed decisions during our rookie drafts and player trades.

This work has also been an attempt to reveal the truth that drafting in an IDP league is not the same as drafting in vanilla leagues.  The “normal” strategies of rookie drafting do not fit within our IDP universe.  There is a more efficient and rewarding course!

In the discovery process, I did run into a possible worm-hole that has a high potential for value.  That worm-hole is a strategy for the start-up draft but more on that later.  Let’s start with what we’ve learned so far.

If you’re born in a cubicle and grow up in a corridor, and work in a cell, and vacation in a crowded sun-room, then coming up into the open with nothing but sky over you might just give you a nervous breakdown.

I will use the first half of this article to summarize what we have learned so far in our journey.  Reference this first part as a quick guide whenever preparing for your rookie drafts or facing a trade decision.

Efficiency is the Key to Victory

To dominate our competition and build a long-lasting empire in our leagues, we have to maximize efficiency.  Every pick and every trade needs to lend a hand to that goal.  It is the purpose of the above strategy. Know the value of the players and be efficient in acquiring that value.

To succeed, planning alone is insufficient.  One must improvise as well.

A New Strategy for Startup

When I finished my research and summarized the above learnings, I realized that another truth had revealed itself. There is a fundamental shift in IDP Startup Draft strategy that I need to explore. This shift involves targeting wide receiver, tight end, quarterback, and IDP players early in the draft. We find running backs, defensive backs/safeties, and even defensive linemen in rookie drafts at a reasonably high success rate. This success rate implies that the most efficient method is to prioritize the harder-to-draft positions during the start-up. Now, some of you may say duh, but I will provide you the following example to demonstrate how I mean to push this strategy.

I joined an IDP heavy league (thanks to the folks in IDP SZN!). The league setup is Super-flex TE premium, with 11 starters on both sides of the ball and 25 bench spots. We use IDP123 scoring. So following the methods we have learned so far in the series, I calculated the value for the positions, and I placed them into tiers so that I could get a sense of how the positions broke down. I didn’t over-complicate this process. I illustrate the simple way to tier player value below.

So, based on the calculations I ran for the league and the last three years positional averages, this is the first two tiers of players.

I hope all of you IDP fans are freaking out about what you see up there!!  Danielle Hunter and Nick Bosa are holding the same value as Saquon, Michael, and Zeke!  I know I was excited.  The most challenging positions to rookie-draft in the above chart are QB, TE, and WR.  So, I will focus on them.  I have the tenth pick in the draft, and here is how the first round fell out.

Looking at my tiered rankings, I have to choose between Dalvin Cook, George Kittle, Danielle Hunter, or Nick Bosa.  This choice was neither challenging nor controversial for me, and I decided Kittle.  You could put any TE here that you have ranked as your number 1 TE in dynasty.  Mine happens to be Kittle.

First goal complete!  TE is hard to replace in rookie drafts, and now I won’t have to worry about it for a while.  My understanding of VORP has secured my first positional advantage in the league in my TE pick.  Again, neither hard nor controversial.  The 1st round completed, and now I’m sitting at the 2.03 spot.

Here are my rankings.

The decision comes down to filling a QB spot, a WR spot, or a linebacker spot. Now I just heard a bunch of you flip out! You can’t take a linebacker this early!! But why not? They are hard to replace in rookie drafts, and the best tend to stay the best. However, we know that it is harder to find WR’s and QB’s in rookie drafts because of our research. Indeed a style decision, and I decided to go with the WR here and secure a top 12 guy. I chose DeAndre over Davante only because I was excited to get him in a league.

Waiting for the 3rd Round

Here is my cheat sheet now.

My third-round pick was a bit of a mistake. I was able to talk myself into picking Julio Jones and not following my rankings. I chose him because I wanted the safe feeling of getting a top 5 WR for at least the 2020 season. OBJ or Mike Evans would have been consistent with my sheet. But the WR pick here still matches the theory of the draft. Looking at the left players, WR remains the hardest to replace in rookie drafts, so now I have placed reliable assets in those spots.

You may be thinking that I’m playing the zero-RB game, and sure, it kind of looks that way. But it is not a strict zero-RB strategy. It’s just taking players that fall into tiers that are hard to replace in rookie drafts. RB is the easiest to replace as rookies, so I am maximizing my efficiency to ensure I build a long-lasting dynasty team that is player-value-oriented.

Boldly Go!!  That’s right, friends!  I have always followed the advice to wait on LB and fill out the DL and DB spots because LB’s are easily replaceable.  However, I am bucking that wisdom.  LB’s are not easily replaceable in rookie drafts.  Furthermore, the top players tend to stay top Linebackers throughout their careers.  So, Darius Leonard in the 4th round!  Is it too early?  Not in my opinion.  According to the value calculated for this league, the only two IDP positions that are more valuable than him are the DL1 and the DL2.  The reason I didn’t choose one of those players is that they are easier to find in rookie drafts.  Efficiency!!

Notice in round 3, managers are choosing the RB position.  Also, there is a run of WRs in rounds 4 and 5.  But I already have my WR’s, although I still regret the Julio pick.  My 4th round LB ensured I locked up a top tier player at the position.  So it is time for a choice.  I was nervous here, knowing that RB’s are slipping away, and we are already starting to eat into replacement level players at the position.  There are no RB’s left in Tier 5 and above.  Here is what we’ve got.

Tua is there in my Tier 4 for QB.  But I know the hit rate on 1st-round QB’s, which makes me shy away from that pick.  There is a couple of Tier 4 WR’s I could choose, but I am feeling pretty comfortable with that spot.  So, and I think you know where I’m going, its time to anger some of my league mates with a second IDP pick.  But no, I didn’t choose Danielle Hunter.  I made a homer pick here, and I apologize for nothing!!  Nick Bosa, welcome to the team.

The chart above does not change much after the next four picks, and I take Jamal Adams with my 6.03.  I found an exciting fact about the DB (at least in this scoring format). I could see that only 11 safeties are scoring above replacement value over the past three years.  The chart above shows you the players I believe to be the top 11.  In this particular league, we start 3 Defensive Backs.  So do the math there.  That means 25 defensive backs are scoring at replacement value.  With that knowledge, I decided that I had to secure a positional advantage at the DB position hence the Adams pick.

It felt weird to be six rounds into a super-flex start-up draft without drafting a QB or an RB.  I have practically punted those two positions, and I am sure my league mates were curious also.  The entire idea behind the draft was to maximize efficiency.  In this draft, the efficiency allowed to me secure the following positional advantage in the first 12 rounds:

Do my QBs suck? Well, sure, I’m not that excited about them. Kirk Cousins and Ben Roethlisberger in the 2020 season, but I do have a way to improve my QB dynasty value. Do my RB’s suck? Yep! My first RB taken was Mark Ingram in the 16th round, so yes, my RB’s are abysmal. I know where I need to concentrate my efforts in the 2021 rookie draft. But again, I tell you, this is not Zero-RB, and I did not intend to draft this way. But I focused on value-based drafting while prioritizing hard to replace positions. If I had been at the 1.02, I would have taken CMC or Saquon Barkley depending on the mood I was in that day. I would have made sure to have one of those Tier 1 players on my team because they were the appropriate value at that pick.

My Rankings May Differ from Yours

I want to discuss one more thing before we conclude.  Please pay attention to the strategy that I’m suggesting, not the players that I have ranked.  I am trying to compel you to draft the value that your league provides in its scoring rules and encourage you to boldly go by performing start-up drafts based on the probability of improving individual positions in rookie drafts.  I am not telling you to pick Nick Bosa in the fifth round, nor Darius Leonard in the fourth.  Instead, see that in this particular league’s scoring, the LB1 was on the same tier of value as the RB6 and WR2 – WR8.  It is up to you to choose who you think the LB1 is.  DynastyNerds.com has excellent rankings on the subject, but if you don’t like them, than Tom Kislingbury at DLF and IDPGuru.com are excellent sources of info too.

That’s it! That’s the big one! I conclude this 6 part series on IDP value! Some of you may be wondering about the timing of the issue. The 2020 season has already started, and the final issue has an entire chapter about start-up drafts. I mean this series to be evergreen, and I will be referencing it next year, so if you found the data helpful, then stick with me, and I will remind you of this series next year. Hopefully, we will have explored more by then and will be able to look back at this article with more data and hidden values. As always, friends, thanks for reading and commenting and always boldly go!