The most important plays in IDP Fantasy Football are the impact plays. Sacks, interceptions, forced fumbles, and many more! Find out why these plays make the biggest impact on the game and why they’re scored the way they are in IDP123 Default Scoring. 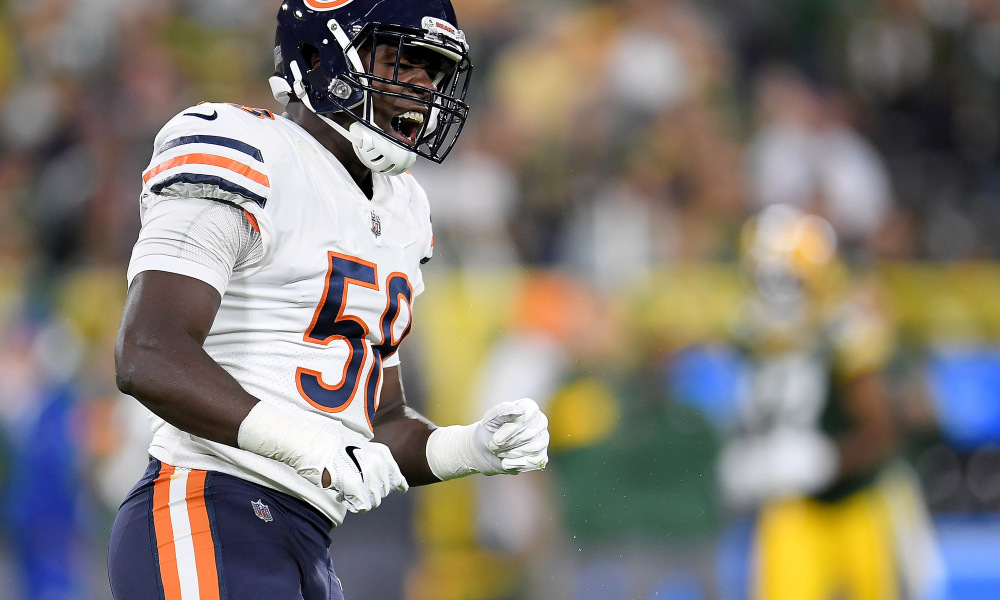 Defensive football is reactionary in nature. You are reacting to the offense who controls the ball. The best defensive players are the ones most often affecting the ball’s movement downfield by being in close proximity (good tacklers) or those making the biggest impact when they are near the ball (impact players). Examples of good tacklers from the 2020 All-Pro list would be Budda Baker (17 impact plays and 118 tackles) and Jordan Poyer (15 impact plays and 124 tackles). They are seemingly always around the ball on any given play affecting and slowing its progression down the field. Conversely, Minkah Fitzpatrick (19 impact plays and 79 tackles) and Tyrann Mathieu (20 impact plays and 62 tackles), neither boasting high-end tackle numbers but both affecting the ball in a major way when they are in the vicinity.

All four of these safeties are elite players in their own right, but they affect the ball differently. Both types of good players should be rewarded effectively. IDP123 scoring does a very good job of this by emphasizing the importance of impact plays and players without undermining the value of a good tackler.

Here are the most impactful defensive plays in football.

A defended pass is one of the most impactful plays by the defense because it meets two of the criteria. It results in no yardage gained by the offense and creates a turnover opportunity. A defended pass can happen at any level of the defense. It could be a defensive lineman batting a pass at the line of scrimmage. Or a safety making a jarring hit on a tight end at midfield. Maybe a cornerback getting his hand in-between the ball and receiver at the catch point 40 yards downfield. All result in the same outcome.

Passes that are defended can often lead to an interception by the defender or by another defender in the area causing a turnover.

In IDP123, PDs are three-point plays, which is honestly the minimum value I think should be attributed to the play. An increase to 4 or even 5 points is a variation of scoring that I absolutely support. The skillset it takes to execute this play routinely is one not all players possess, and because of its degree of difficulty and overall impact on an NFL game, anything less than three points is simply too low.

Tackles For a Loss

Criteria Met – Results in negative yards by the offense

There are only two plays that definitively move the line of scrimmage backward for the offense—a sack and a tackle for loss. A sack is a tackle for loss on the quarterback. A tackle for loss (TFL) is any tackle made by a defender on an offensive skill player that isn’t the quarterback. Tackles for loss make a major impact in an NFL game because they negatively affect the down and distance for the offense. This puts them in a more difficult situation than the previous play: Ie, a second and three becoming a third and nine, for example.

As such, these plays are scored higher than a traditional tackle, which has allowed the offense to gain positive yards before the play ends. You may be saying to yourself, ‘wait a second,’ the thesis statement says that all impact plays are worth three or more points. Still, TFLs are only credited as two-point plays within IDP123 scoring. And technically, you would be right. However, TFLs are still considered tackles, and as such, receive a tackle score and a TFL score. This means the net result of a TFL in IDP123 scoring is actually four points, which fits the parameters of an impact play.

A forced fumble can be one of the most exciting and influential defensive plays. They can happen anywhere on the field, behind the line of scrimmage to a quarterback being sacked, or 45 yards past the line of scrimmage by a wide receiver as he’s being tackled. The key to this defensive play is that when a fumble is forced, it creates an opportunity for a turnover, or a fumble recovery, by the defense. Not all fumbles are recovered by the defense, though, so the play itself can end up having no real impact on the game except to rattle the offensive player who fumbled. But forced fumbles, when recovered by the defense, can change the momentum of a game in a way few plays can.

As described above, once a defender has forced a fumble, the opportunity for himself or another defender to recover and possess the ball for the defending team is created. A turnover play’s impact goes without saying. If a defender can make the play, it’s rewarded with three points in IDP123. Because of the somewhat random nature of a player recovering a fumble, the play isn’t rewarded more. What do I mean by that? When the ball is jarred loose by the forced fumble play, it’s often recovered by the player closest to it. This can be an offensive player just as easily as a defender. Without getting lost in the weeds, the actual recovery isn’t necessarily a skill-based play but more providential in nature. Thus it stands to reason not to overly embellish its fulfillment the way you do an interception, even though the play does constitute a turnover.

Criteria Met – Results in negative yards by the offense

If the most important player on an NFL team is the quarterback, it makes sense that the most impactful and influential plays a defender can make are directly tied to them. These plays are sacks and interceptions.

A sack is, essentially, just a tackle for a loss. If you don’t remember, a TFL is a tackle on a positional player behind the line of scrimmage. A quarterback that has dropped back to pass is a much harder player to tackle for a loss because they have the option just to throw the ball away. When that happens, they lose the set of downs, but they don’t lose yards, and the line of scrimmage remains intact. For that reason, sacks are one of the hardest plays for a defender to complete. Because of the degree of difficulty, scarcity of occurrence, and physical talents needed to create sacks with any level of consistency, it’s viewed as a touchdown equivalent play for a defender in IDP123 and is awarded six points.

It’s important to note here that I don’t include sacks as impact plays when discussing defensive linemen. Sack production is expected from edge rushers and linemen, and getting after the quarterback is their primary motive. However, because of the more infrequent and specialized nature, sacks are included as impact plays for linebackers and defensive backs.

As with the sack play, interceptions are extremely difficult to create with any modicum of consistency. A defender must be well aware of the ball and to make a decisive play on the ball in an attempt to catch it. Sometimes a defender is given a poor throw from the quarterback, and it’s an easy play, but most often, that’s not the case. Interceptions may be the single most impactful play a defender can make. In essence, he is beating two offensive players in one play. The quarterback and the receiver, while also creating a turnover. Interceptions are awarded 6 points in IDP123 scoring.

A safety occurs when an offensive player is tackled in their own end zone. This can be in the form of a conventional tackle on a positional player or the quarterback. The safety is one of the very rare scoring plays a defender can make and is awarded two points in an NFL game. For IDP123 scoring, the safety play is worth three points. It’s very impactful but very rare and impossible to project or create with any consistency. For those reasons, it isn’t rewarded more, even though there is a case to be made that it’s worth more.

Criteria Met – Results in a turnover and creates a scoring opportunity

A blocked kick may be the most impactful play a defender can make in football. Blocked kicks can occur during a punt attempt, field goal attempt, or a PAT. They are guaranteed to take place behind the line of scrimmage. If a block happens during a punt attempt, it can be completely demoralizing for a team that was already willing to give the ball back to the opposing team, albeit much further down the field. It becomes even more impactful when the block negates the offense from scoring either one point (PAT) or three points (field goal attempt). How many NFL games are won and lost on the kicker? If a defender can make an impact play on one of the most influential and important plays of the game, like a kick, it should be adequately rewarded. In IDP123, all blocked kicks are three points.

In football, the best players on the field are the impact players. They’re often the best players for fantasy football as well. On offense, these are players like Tyreek Hill or Dalvin Cook. Good for consistent usage week in and week out, a few big plays per game, and the ability to score multiple touchdowns. Conversely, on defense, these are players like Devin White or Jamal Adams. Players with the ability to create negative plays and turnovers. In other words, impact plays.

Before the rules can be bent or broken, they must be established. IDP123 isn’t intended to be rigidly consumed and implemented. It should be explored, studied, and customized as you and your league-mates see fit. But before you can do that, the standards of the scoring system need to be fully fleshed out and defined. That’s the message and mission of IDP123 scoring. To be a fully fleshed out, well defined, thoughtful, simplified, unified, and balanced IDP fantasy football scoring format. Impact plays are defined and rewarded appropriately. Ambiguous terms like “big play heavy” and “tackle heavy” do the fantasy community no favors. The semantics around the defensive side of the ball should be given a definite value that can then be manipulated to fit you and your league mates’ personal preferences. Like all things fantasy football, have fun with it!