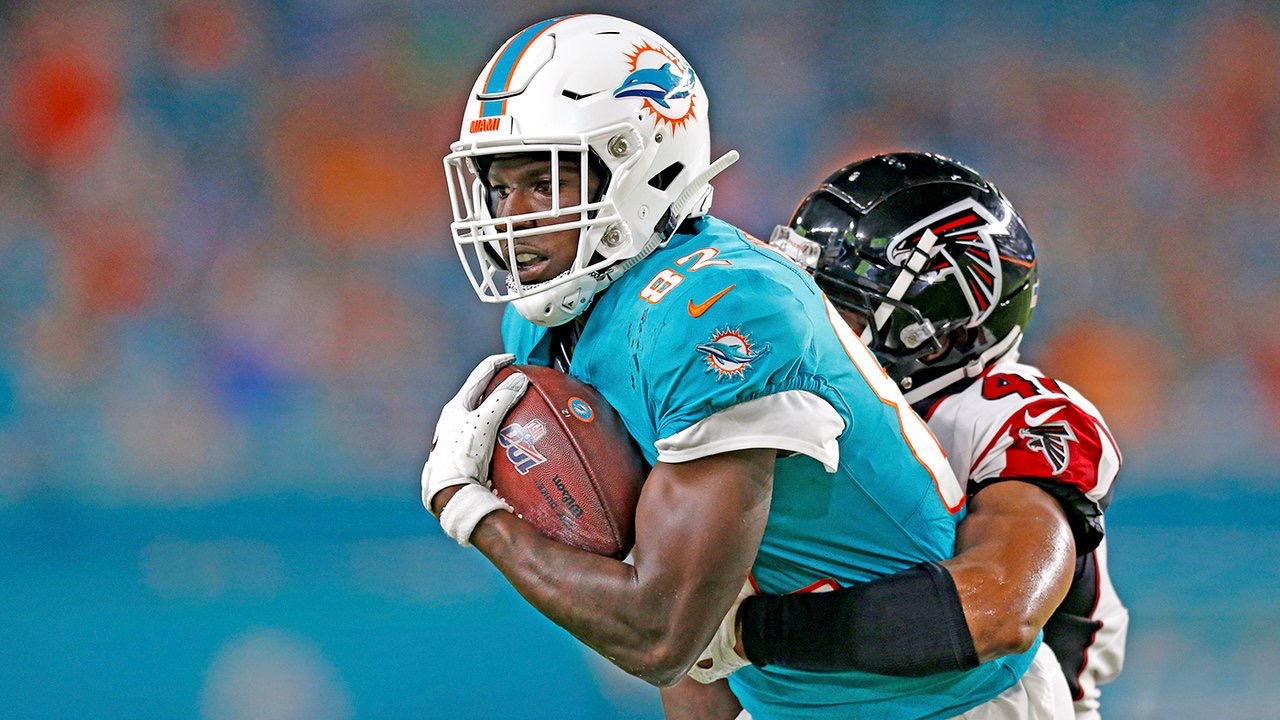 The NFL Preseason can lead to some of the most challenging decisions for fantasy players. We’ve been deprived of football for so long that when it finally returns to our TV, we often overreact to minor plays or news blurbs (shocking, I know). I understand that it’s incredibly difficult to keep a level head during the preseason, so that’s what I’m here for.

I tracked every preseason game from this past weekend, writing summaries on every player that caught my eye with an impressive stat line. In an attempt to provide some clarity after this long-awaited weekend, I sorted all of these players into one of three categories: “Add and stash”, “add and sell high”, or “leave on waiver wire”. I’m aware that all leagues are different, so there’s a good chance some of these players are already rostered in your leagues. All of these decisions were based on dynasty leagues with 30 roster spots, but no matter how many roster spots are available in your leagues, the following information will prove to be useful. Enjoy!

Fountain put up a respectable stat line in this contest, but he did so without any other major pass catchers making a lengthy appearance in the game. He’s nothing more than a depth option in that Indianapolis receiving group.

McGuire doesn’t hold much standalone value, but if Le’Veon Bell was to suffer an injury in-season, he would provide immediate RB2 upside in an improving Jets offense.

Dortch didn’t have a blowup game against the Giants, but he proved to be serviceable as a safety blanket for Sam Darnold. Instead of rushing to your waiver wire to add him right now, keep an eye on Jamison Crowder’s health. If Crowder goes down, Dortch could provide some immediate fantasy value. Until then, simply keep him on your watch list.

Jones had a solid showing during the first week of the preseason, but that group of receivers behind Sterling Shepard and Golden Tate seems to be irrelevant with Saquon Barkley and Evan Engram also soaking up targets. Overall, I’m not convinced that Jones will ever receive a consistent snap share, even with Tate suspended for the first four weeks of the season.

Coming out of college, Davis was heralded as a potential sleeper due to his elite athletic profile. He hasn’t quite panned out at the NFL level, and I’m hesitant to add him onto my dynasty roster for the same reasons mentioned above in Kidsy’s blurb.

Hilliard didn’t necessarily light the world on fire in his first 2019 preseason game, but he’s certainly a name to talk about after the Duke Johnson trade. Until Kareem Hunt returns in Week 10, Hilliard will likely serve as the backup to Nick Chubb. However, I’m selling the hype that Hilliard would become the workhorse if Chubb was to go down with an injury. Hilliard would likely form a committee with one or two other running backs in Cleveland, which surely caps his upside.

Higgins has shown an excellent rapport with Baker Mayfield, and with the recent Antonio Callaway suspension, Higgins could truly establish himself as the WR3 in this up-and-coming offense. He’s someone I’m certainly adding if possible.

Brossette received a heavy workload in this contest, but he did so while Sony Michel, James White, and Damien Harris all sat out. In addition, he was relatively inefficient, averaging only 3.0 yards per carry. Brossette is nothing more than a depth piece in New England.

Meyers has certainly made a name for himself over the past few weeks, and despite his UDFA status, he’s apparently been one of the top receivers in Patriots camp. However, he can certainly be traded for a pretty penny right about now, and I have trouble trusting unproven rookie UDFAs in dynasty.

Atlanta spent a Day 3 pick on Ollison in the 2018 NFL Draft, and with Devonta Freeman being a potential cut candidate after this season, Ollison will have the opportunity to carve out a major role next season. It’s obviously unlikely that he performs well enough this year to become the starter in 2020, but I’ll burn a roster spot in the off chance it happens.

I’m looking at Hill similar to the way I view Ollison. It isn’t likely that he takes over for Devonta Freeman in the near future, but the possibility is still there. In case this does happen, Hill is a player that I’m keeping at the end of my bench in an attempt to wait for a sell high opportunity.

Williams has been one of the most hyped-up players thus far in the preseason, but rightfully so. However, I’m not confident in his ability to carve out the role as the WR1 in Miami this season (which is what many are expecting him to do), so I’m capitalizing on the hype by shipping him off to any dynasty owners that believe he’ll be a stud in the NFL.

McNichols received some serious hype coming out of college, but he’s bounced around the league a bit since then. I’d keep him on a watch list in case Derrick Henry goes down with an injury, but I’m not expecting much from McNichols in the near future since he currently has two solid running backs ahead of him on the depth chart.

Even in tight end premium formats, it’s nearly impossible to envision Bunting ever receiving a consistent target share behind both Trey Burton and Adam Shaheen. Even if one of these two TEs go down with an injury, I’d fully expect the targets to be distributed elsewhere in that offense.

Recently selected in the sixth round of the 2019 NFL Draft, Williams is expected by many to be the direct backup in case Aaron Jones suffers an injury. However, I think Williams could see a bit of a larger role than that. The Green Bay coaching staff has been hesitant to give Jones a full workload in the past, so I expect Williams to be mixed in even when Jones is healthy.

Besides the sole interception, Stick looked relatively impressive in his debut NFL game. He’s currently sitting behind both Philip Rivers and Tyrod Taylor on the depth chart, but due to Rivers’s age, it’s possible we see Stick take over that starting role within the next couple of years. He provides definite rushing upside, which has proven to be a cheat code for fantasy quarterbacks.

There are simply too many receivers atop Sherfield on the depth chart in Arizona. There would need to be multiple injuries for him to see consistent snaps in the regular season, and that isn’t something I’d be banking on in a league that only permits 30 roster spots.

Ferguson’s 6’5” frame provides a monstrous target for Russell Wilson, but unfortunately for him, the “big-bodied receiver” role in Seattle is currently being occupied by DK Metcalf. In an offense that simply doesn’t pass the ball a ton, Ferguson would need a lot of things to go his way in order to become fantasy relevant.

Ogunbowale was relatively inefficient in his 2019 preseason debut, but his excessive use at the goal line goes to show that he has the trust of the coaching staff. Just the other week, Bruce Arians told the media about how Ogunbowale is having a “fantastic” camp, so he’s certainly someone to keep an eye on with so many question marks in that backfield. However, I’m not burning a roster spot on him quite yet.

Schnell posted one of the more impressive stat lines in the entire league this week, but it’s difficult to get excited about him when considering the seemingly endless number of pass catchers in that Tampa Bay offense. The path to fantasy relevance is simply too difficult to see.

If James Washington is sitting there on your dynasty waiver wire, do me a quick favor. Minimize the tab for this article, go spend all of your FAAB in an attempt to acquire him, and then come back and finish the article. There’s no doubt in my mind that Washington is the second most talented receiver in Pittsburgh, and I’d bet that he has the WR2 role in PIT locked up before season’s end.

All of Boone’s production from this game came from a 64 yard touchdown run, but it was an impressive run nonetheless. I fully expect Alexander Mattison to take hold of backup duties behind Dalvin Cook, but if he falters, Boone is certainly someone to keep a close eye on.

Humphrey received some hype coming out of Texas, but after his horrendous combine performance, he plummeted down draft boards. Unless there are injuries to multiple Saints receivers, I don’t envision Humphrey carving out a role in the foreseeable future.

Thompson showed off his skill set on his sole reception, where he shook a linebacker with his impressive route running and took a slant 29 yards for the touchdown. With relatively minimal talent ahead of him on the depth chart, Darwin could be receiving consistent touches in that explosive offense sooner rather than later.

Hurd showed off his YAC ability in this contest, proving that he’s making impressive strides after converting from running back to wide receiver. Since receiving Day 2 draft capital, Hurd has been someone I’m targeting late in rookie drafts. After Saturday’s performance, I’d be even more excited to have him stashed on my roster.

To consolidate some of this information into one list, here’s how I’d rank the top 10 aforementioned players in terms of dynasty value:

Thanks for reading, and as always, follow me on Twitter @DynastyFF_KyleM for more dynasty content! Become a member of the #NerdHerd for just $2.99 per month. Get Dynasty Nerds consensus rankings, buy/sell tool, extra podcasts and more.