Is It Time to Panic on Joe Mixon?

Through two weeks of 2020 Joe Mixon has struggled. Should fantasy gamers hold or move on? @ekballer has answers 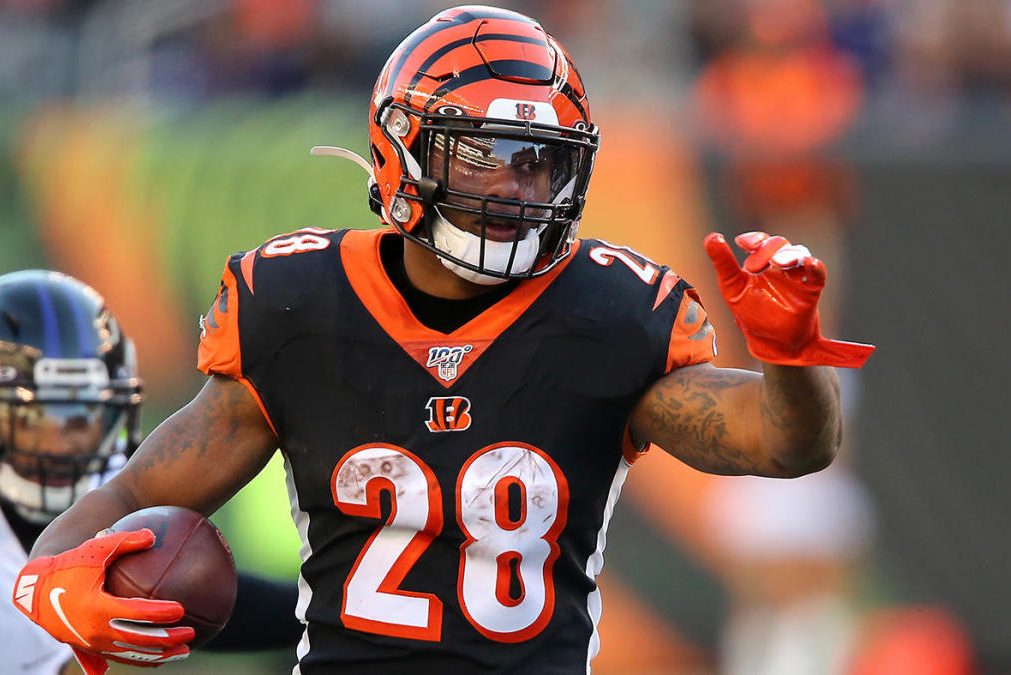 It felt great clicking that draft button in the second round.

Joe Mixon, a workhorse back on an improving offense, seemed like a steal outside the top 12 picks.  Rostering him as an RB2 was a no-brainer for many fantasy players this fall.

The young Bengal closed out his 2019 season with over 155 combined yards in 3 of his last 4 games;  he was the PPR RB7 over the second half of the season, averaging over 18 points / game.  He finished with over 1100 rushing yards and 280 receiving yards for the second year in a row.

With an upgrade at QB and a supposedly-upgraded offensive line- featuring 2019 1st rounder Jonah Williams and free-agent acquisition Xavier Su’a-Filo- it seemed like the sky was the limit for Mixon in 2020.

And yet, here we are.

What happened? Where do we go from here?

The line play for the Bengals has not been good.  Football Outsiders has them ranked as the 19th-best unit in adjusted line yards and the 20th in stuff rate.

Su’a-Filo, the Bengals best-graded lineman by PFF and the only guard with an above-average rating, just hit the IR with an ankle injury.

Let’s look at some film here.

Note:  I’m not the guy to which to direct your blocking schemes questions.  If you have that knowledge, and you want to chime in in the mentions, be my guest.  I’m going to stay away from guessing at play calls and assignments as I’m no expert.

This first quarter zone run was how much of Mixon’s day went in week 2.

The Bengals LG winds up on the ground; Miles Garret blows through a double-team, collapsing the A gap; Olivier Vernon and Sione Takitaki double team the RG.

Mixon might have been able to bounce the run outside and get a corner one-on-one once Garrett was committed, but he’s focused on picking up a positive play.

In this play, both the RT and RG are beaten before Mixon even touches the ball.

On this play, Mixon has a pull blocker (Jordan) that completely misses the LB and leaves them a clean shot at the rusher.

It wasn’t all bad; there were some well-blocked plays as well. But it’s going to be a tough day for your running back when he’s blown up at or behind the LOS on 6 of his 16 attempts. To be fair, Cleveland is currently ranked as a top-5 DL by Football Outsiders, but, as you’ll see shortly, things aren’t getting much easier.

The narrative was that in the end of 2019 Mixon was finally unleashed upon the NFL as a true three-down workhorse, receiving all the opportunity he could handle.

The rush share is great. But on an offense that is struggling to move the ball and create scoring opportunities, with an offensive line that’s not creating holes, it’s nearly impossible to put up RB1 numbers without ample passing game work.

His backfield mate Giovani Bernard, on the other hand, has a whopping 12 targets this season, 3rd in the league for RBs.

And there is our problem. Bernard is getting in on the 2-minute drill and in obvious passing situations, and he’s killing Mixon’s upside. If Mixon had 12 targets, we’d be gushing instead of getting concerned.

And all Mixon does with receiving game work is this:

At this point, we’ve seen enough from this offense to know that this is what Taylor wants to do with Mixon. The usage has been relatively consistent over the past 18 games. Total RB targets are actually up so far in 2020, but all that work is going to Bernard.

To make things worse, Mixon, who had a 7th-ranked 48 total redzone touches a year ago, has just four through two games.

If Mixon is splitting redzone work, and he’s not the receiving back, what we’re left with is a between-the-20’s banger.

The Bengal’s offensive line was overmatched against Cleveland.

Cleveland’s line is elite, though; not every team has Miles Garret, Olivier Vernon, and Sheldon Richardson tearing through blocks.

Things must open up in coming weeks for Mixon and the Bengals offense, right?

Well, not so much.

In the next seven weeks, CIN plays five top-10 defensive lines. I’m not sure the sledding gets any easier here for Mixon. And I’d expect that- against at least BAL and PIT- they will be trailing the entire game, which means we should expect more Bernard than Mixon.

Well, sure. There’s always hope- it’s football, pretty much anything can happen from one week to the next.

We have seen teams in the past that had offensive lines make drastic improvements in short periods of time. The Seahawks come to mind; in the ’18 offseason, they went from one of the worst lines to a league-leading rushing attack with just minor personnel moves and a coaching change.

And we’ve often seen young / changing lines take time to gel; more than any other position, chemistry and consistency are key to line play. There’s certainly a world where the line takes a step forward during the season.

There’s also a scenario where the offense improves. If Burrow and Green start connecting, the offense starts moving, and Mixon sees more scoring opportunities, he can make a living off that. He’d essentially be in the same category as Nick Chubb at that point; a primary rusher that needs TDs for upside and lacks a high floor.

Mixon as a player is still a baller.

He’s tough to bring down, can be elusive, and creates plays.

Despite not packing the box score, he’s 6th in the league in broken tackles and 12th in total yards created. He can still get it done. He hasn’t had the breakaway runs yet (last year was 14th, with nine) but they will come.

First- don’t panic! Don’t make a bad move and give up value.

But, at this point, Mixon owners should adjust expectations. Until there’s some improvement around him- or he gets more passing-game work- Mixon is going to be a bit of a boom-or-bust player with a modest floor. 9.4 PPG isn’t a goose-egg, but it definitely stings when you’re expecting 15+.

Should you be making moves?

That’s going to be tough. Mixon’s value is depressed right now. There’s a chance you can trade on the name and get some value, but most players are going to look as his scores and offer you a lowball at best.

I have this problem myself in a few leagues, and here’s what I’m seeing for paths forward:

As a Mixon manager, I’m hoping things take a positive turn, but I’m not holding my breath, either.

In redraft, I’m trying to work the name value and get a package deal with Mixon for a better RB. Mahomes & Mixon for Goff & Zeke, for example- I have that trade out right now.

In dynasty, you almost have to hold still. I’ll be looking for opportunities to upgrade, but mostly I’m trying to figure out how to win without him and hope things get better.

Thanks for the read- happy football- may all your teams win, unless you’re playing me!