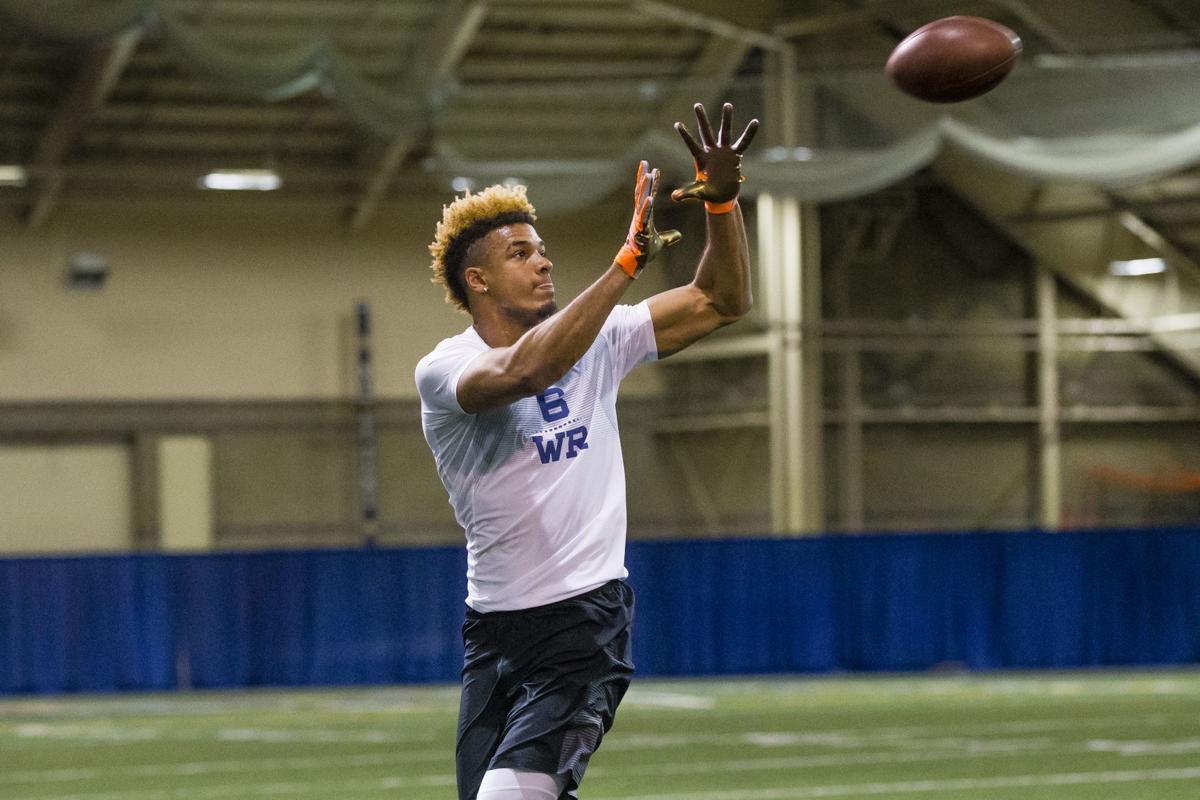 One of the best situations for a receiver in football is to be catching passes from future Hall of Famer Aaron Rodgers. One of Aaron Rodgers most amazing statistics is that he has finished as a top 2 fantasy quarterback in 7 out of 8 of his healthy seasons. Jordy Nelson was Aaron Rodgers favorite target since 2011, consistently scoring double-digit touchdowns and had 3 top three fantasy finishes in Green Bay. He has recently been traded to Oakland and there is now a large role to fill in Green Bay’s offense. Although I am a big believer in Davante Adams talent, outside of him, there is a lot of questions about this receiving corps going into 2018 beyond him, with 9 out of the 11 receivers on the current roster having less than three years of experience. Randall Cobb has had three straight underwhelming seasons, and Jimmy Graham may be nothing more than a large touchdown target these days. A breakout is coming in Green Bay, and that role could immediately lead to WR2 numbers. These are the four receivers most likely to take over this coveted role.

Marquez Valdes-Scantling: 6’4 and ran the second fastest 40 at the combine behind D.J Chark at 4.37 he is the definition of a size-speed freak. A great deep threat at USF averaging 17.3 yards a catch during his time there. USF did not exactly have a high octane passing offense, so his role in the offense was often to just run fast and run deep to open up running lanes. He is a very interesting athlete, but his route tree is not even close to developed and doesn’t have the hands to make tough contested catches he will have to routinely make at the next level. A lot of his touchdowns in college were near drops that would have been jarred loose with NFL talent covering him. His role in a pro offense may be to strictly run fly routes and take the top off the defense, which could still hold some value in an Aaron Rodgers led offense. I think he is a good pick to target in the fourth round of rookie drafts, as there is clearly potential with his athleticism but his chances of impacting the offense early on is slim.

J’mon Moore: The first receiver the Packers drafted, he led the SEC in receiving his Junior season and put up similar numbers his senior year. He has had the most college production of the rookies drafted and there is a direct correlation between college and pro production. His 196 yard, 2 touchdown performance against Georgia in 2016 is one of the most impressive games in recent memory. As the first of the three rookies picked, the Packers clearly believe in him over the other two receivers. He essentially has the same issues as everyone else on this list, short route tree, subpar hands, and some of his college production was inflated by playing against some bad teams, (521 of his 1081 yards his senior year were in three games against teams with a combined 10-24 record). He also struggles to get downfield against press coverage, which is not ideal for deep threats.  He is the slowest and the shortest of the three receivers. However, he is still a very impressive athlete at 6’3 and a SPARQ score in the 78th percentile, who the Packers clearly believe in, I think you can comfortably invest in him in the early third round, and I wouldn’t fault you for taking him in the second.

Geronimo Allison: The only receiver on the roster outside of Cobb and Adams who has any sort of rapport with Rodgers is Geronimo Allison. Allison has actually already had two big games for Green Bay in his two seasons there in a reserve role. He runs good routes, has great hands, and is big enough that he is tough to bring down. He also is approaching the magical year three that Wide Receivers tend to break out. I think he will have the first crack at filling the role. However, due to his speed and lack of strength off press coverage, I think it will be hard for him to truly take over this role long term. He just doesn’t have the skill set to be a deep threat. Jordy Nelson really was a premier deep threat at the position which is why he was so successful, where Allison would really be best suited to take Davante Adams role, which just isn’t going to happen barring injury. I do think there are some immediate returns to be had here, and sometimes opportunity and a good QB are all you need to take the job and run with it. Allison has both so in a rookie/free agent combined draft, I think Allison is worth an early third, just on the off chance that he develops the chemistry with Rodgers that made Jordy so special.

Equanimeous St. Brown: 6’5 and running a 4.46 40, St. Brown is a guy who looked like a borderline first pick his junior year before an underwhelming senior season that saw him plummet all the way to the sixth round. However, I think if he was taken in the top 100 like he was projected to, we would be all talking about St. Brown as a unanimous top 15 pick in rookie drafts. The separation this guy creates at his size is absolutely incredible, and he is really good at shifting from the slot or the outside, which is another area that allowed Jordy to really become a great receiver. He can attack the defense as both a deep threat, and in the middle of the field, and he is great after the catch. He has decent hands and has a good footwork to change directions despite his long strides. However, he didn’t fall to the sixth round for no reason. He is very thin and lacks strength and the separation he created in college was more due to this athletic prowess as opposed to his route running. The biggest thing to note is that he is a bit of a difficult player to coach, with reports that he refuses to stretch or play special teams. He isn’t a complete receiver by any means, so an unwillingness to accept coaching could mean he flames out. Also draft capital usually means little to me, but it does speak to the fact that the Packers found Moore and Valdes Scantling to be more important prospects to draft, they may get the first shot. Being able to reunite with his college quarterback Deshone Kizer will allow him to shine with the second unit, and he will be the first rookie to get a shot with the starting unit. Reports out of rookie camp on St. Brown are great and I think he has a good chance to overtake Allison and start the regular season as the Packers WR3. I would take St. Brown as a mid-to-late second rounder, as his athletic profile and the chance to play with the best quarterback in football could be extremely beneficial down the line.

To wrap things up, I don’t think you can realistically expect anyone to replace Jordy’s production right away, but the Packers drafted three size speed freaks to fill that hole in hopes that one will break out an fill the role long term. I think it would be wise to apply the same approach to your fantasy draft and try to acquire St. Brown, Moore, and Valdes Scantling in the second, third, and fourth round respectively. St. Brown may have had the lowest draft stock, but he is my favorite to make an impact in the NFL and fill the deep threat role that Jordy Nelson once thrived in.