Is N’Keal a Steal?

N’Keal Harry was once called the top WR in the country. His NFL career hasn’t started off how many expected. @dynastytodd takes a deep dive to find out why. 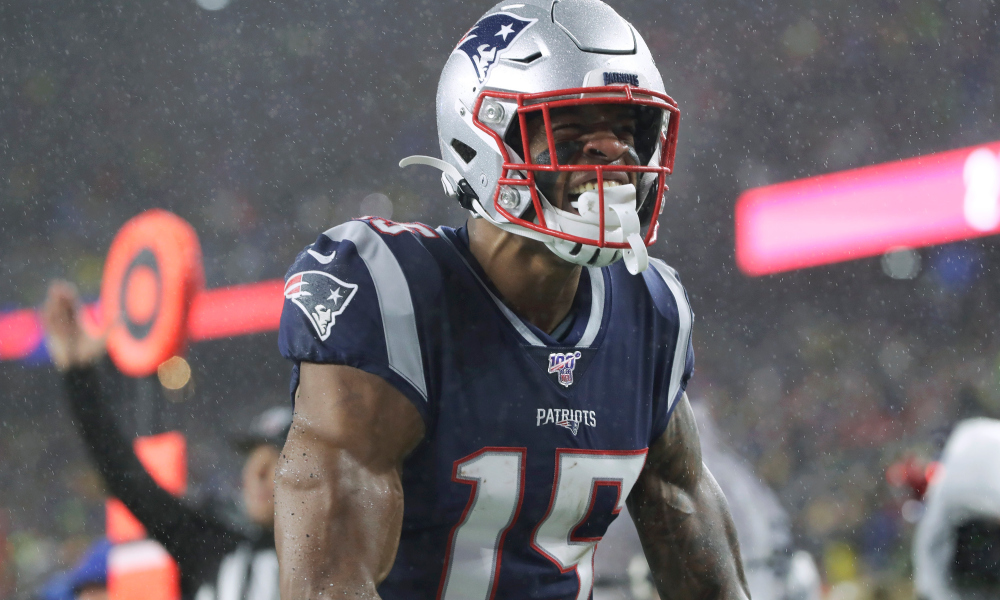 In this article, I will reveal some interesting reasons behind why N’Keal Harry has yet to reach his expected potential coming into the NFL. We will look into his college career, NFL career, and his dynasty future.

N’Keal Harry is a former five-star recruit out of Arizona who was offered many opportunities with colleges to play football such as USC, Texas A&M, and Oregon. He decided to stay close to home and attend Arizona State University. This decision paid off for N’Keal as he shined early during his freshman year. He did so well that season he was named to the Scout Freshman All American team. Moving forward into his junior year, Harry busted out amassing 82 receptions for 1,142 yards and 8 TDs, which earned him first-team all Pac 12 Conference honors. He had another strong campaign that included an insane one-handed catch in his junior year.

This play shows some freakishly good athletic ability from Harry that you cannot teach. Harry decided to opt-in for the 2019 NFL Draft to the delight of NFL scouts. N’Keal Harry had an extremely productive college career, as you can see in the stats and the Impressive receiving skills you see in his game when watching the film. His statistics in college, as you can see, were strong and consistent.

While N’Keal was still in college, the talk was that he was the best wide receiver in the county. This is a receiving group that included D.K. Metcalf and A.J. Brown, which are two of the top WR dynasty pieces to own.

Now clearly, Harry hasn’t shown anything close to what D.K. and A.J. have, but on a talent level, he was seen as the more talented player coming in. We shouldn’t just brush that aside. When you roll the tape out on N’Keal Harry, you see a player that isn’t a speed burner, but he did return punts, so he finds a way to get in space. N’Keal has excellent size to be successful and great ball skills. When the ball is thrown his way, he comes away with it more times than not. Before entering the NFL Draft, Harry was seen as the top receiver in the country by many and projected to be a top dynasty pick. Let’s look at what happened when he entered the NFL.

N’Keal Harry was drafted in 2019 by the New England Patriots with the 32nd pick in the first round. He was one of only two wide receivers drafted in the first round, along with Marquise Brown. The W.R. draft in 2019 that year was loaded with talent including, A.J. Brown, D.K. Metcalf, and Deebo Samuel, to name a few.

N’Keal was rated higher than all of them and given the draft capital to prove it. He was walking into a perfect situation with the GOAT Tom Brady as his quarterback on a team that would compete for the Super Bowl. N’Keal would be their savior as at wide receiver with Gronk retiring, Josh Gordon suspended, and Chris Hogan leaving New England for Carolina. The sky was the limit! N’Keal just had to learn the system, get his timing down and earn Tom’s trust. Sounds great, right!

Well, leading up to the season, N’Keal suffered an ankle injury that put him out for the first nine weeks. That didn’t allow him to gain trust with Tom or get his timing down. By the time he plays, it’s November, and the Patriots are making another Super Bowl run. Brady trusted the players that got him there, so N’Keal was given little chance to thrive with a small share of the targets. The result was awful numbers in 2019, with little opportunity.

Flash forward to this past season, N’Keal Harry was given a QB in Cam Newton, far from an accurate passer as you can see in 2020 with his 8 T.D./10 INT. N’Keal also missed a few games with a head injury. Below you will see his awful numbers so far in his NFL career. Time to talk about his dynasty outlook moving forward.

As we dive in, take a look at N’Keal’s rookie ADP in 2019 compared to his receiver mates, this just serves as a reminder of the talent.

To be successful as a young NFL wide receiver, you need many things to break in the right direction for you. You need a QB that can get you the ball, you need to be healthy, and it helps to have other weapons that take advantage of your talent. N’Keal hasn’t been afforded any of those in his first two seasons at the NFL level. He is only 23 years old, has a good size/speed combination, and the ability to win 50/50 balls.

You can get N’Keal right now for a 2021 mid third round pick, maybe even a late-round pick. Based on mock drafts I have seen, that will land you a WR Tomorrion Terry, Nico Collins, or Demetric Felton. These players will have much lower draft capital than N’Keal, and most likely won’t have the same opportunities or talent going forward. I feel that N’Keal Harry still has the chance to be a valuable dynasty asset for any team. I suggest you consider buying him before the Patriots bring in a QB1 that can get him the ball, and it is too late. He has the talent to have a bright dynasty future; therefore, I believe…

N’Keal is a steal!