Is this the year for Tre’Quan Smith?

In year four can Tre’Quan Smith make a leap for the Saints and fantasy owners? @knighthawk7734 breaks it down for you. 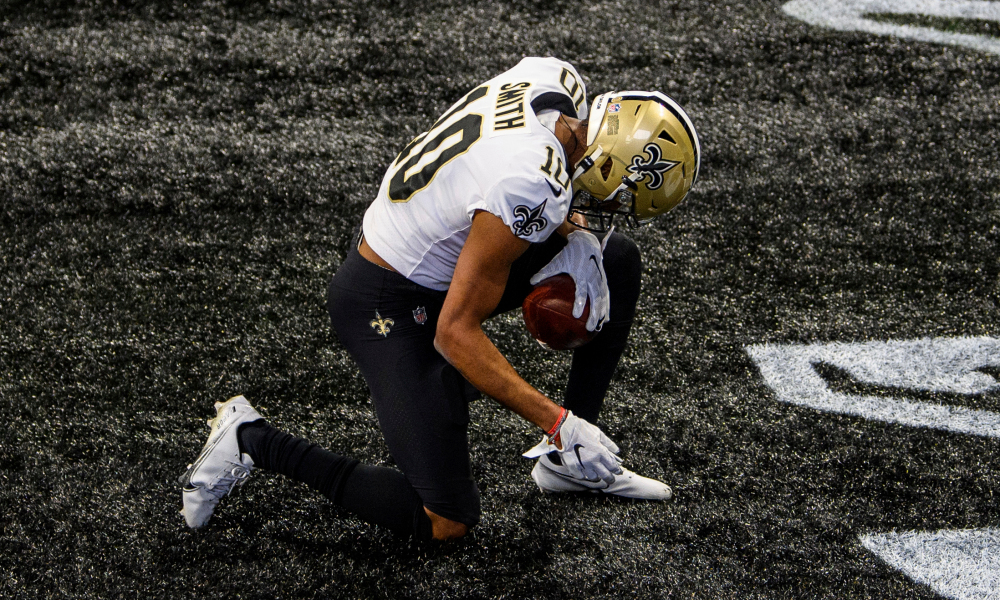 When the New Orleans Saints let Emmanuel Sanders go, it created an opening for a No. 2 receiver. While much of the off-season focus has righty been on Drew Brees’ retirement and the search for his replacement between Taysom Hill and Jameis Winston, this offense has other questions. Jared Cook departed leaving a hole at tight end and the aforementioned lack of a clear No. 2 receiver.

The Saints so far haven’t addressed the position in free agency, and only took a receiver in the seventh round. It’s an important position to fill, but perhaps the team hasn’t been more aggressive to bring in players because they already have the answer on their roster. Which brings me to fourth-year receiver Tre’Quan Smith.

Smith was drafted by the Saints in the third round of the 2018 draft. In his three years, he’s had moments but not consistent production while the Saints have had other receivers over him in the pecking order. In his three years, he’s caught 80 passes for 1,109 yards and 14 TDs. That includes his best production in 2020, where he started 10 games as Michael Thomas missed most of the season. He saw a career high 50 targets, turning that into 34 receptions for 448 yards and four TDs.

Thomas should be healthy in 2021, but with Sanders gone Smith still figures to be the No. 2 receiver option. That could leave him in great position to see more targets and grab more passes than he’s gotten in his previous seasons. While breaking out in the fourth season or later is rare, it’s happened a few times in recent years.

DeVante Parker, a first-round pick for the Dolphins in 2015, struggled with consistency his first few seasons. In 2019, his fifth professional season, he saw 128 targets, turning it into 72 receptions for 1,202 yards and nine TDs. Corey Davis, a first-round selection for the Titans in 2017, had his best production in his fourth season in 2020. He saw 92 targets, catching 65 passes for 984 yards and five TDs. He parlayed that into a three-year deal with the Jets this off-season.

Smith, who is coming to the end of his rookie contract, could be the next receiver to take a step up in production in the fourth or fifth season. But Smith isn’t the only Saints’ receiver who’d like to take a step forward.

The Saints’ depth chart at receiver isn’t packed. Thomas, just a season removed from breaking NFL records, remains at the top. Behind him is Smith and a group of young receivers that haven’t broken out yet. Among those are Marquez Calloway and Lil Jordan Humphrey, who both contributed last season. Calloway caught 21 passes for 213 yards on 27 targets, while Humphrey caught three for 46 yards and a TD on five targets.

The Saints also drafted Kawaan Baker in the seventh round. While it’s not huge draft capital, Baker was productive at South Alabama. In three seasons he caught 126 passes for 1,829 yards and 16 TDs. He provides another potential weapon for Sean Payton and the offense, no matter who is at quarterback.

But aside from Smith, the most likely contender to take a leap forward at receiver in 2021 is Deonte Harris. The speedster is a key weapon for the Saints on special teams as a returner, but he became a bigger part of the offense in 2020. The second-year receiver saw 25 targets in 2020, catching 20 for 186 yards and a TD. He also carried the ball six times for 51 yards. With his speed, it makes sense that the Saints would try to get him more involved on offense, which is why some think he’s the Saints’ receiver poised to break out in 2021.

Which Saint Breaks Out?

In 2020 with Brees missing four starts and Thomas being hampered throughout the season, the Saints’ passing offense took a step back. The team completed 370 passes for 3,945 yards and 28 TDs. Even with Thomas back and presumably leading the group, there is plenty of opportunity. Hill showed he could lead a successful offense going 3-1 in Brees’ stead in 2020, while Winston’s last season as a starter he threw for more than 5,000 yards and 30 TDs. So, who benefits?

I have shares of both Harris and Smith and think both could be decent contributors in 2021 and beyond. Harris is shifty and the kind of weapon that Payton has made a career of using well. I expect him to be a bigger factor in 2021, but it’s Smith that I think has the better season. The question is how much better.

Over the past three seasons, it’s been running back Alvin Kamara that’s been the second option in the passing game. That doesn’t figure to change in 2021, but with Jared Cook also gone, Smith could be in line for 70 to 80 targets. Cook saw 125 targets and added 16 TDs the past two seasons. While some of that work will slide to second-year tight end Adam Trautman, Smith is the more experienced option in the offense. If he can hit 75 targets and continue to maximize his efficiency, Smith could be a solid WR4 or possibly a WR3. At his current ADP of WR91, that could make Smith a bargain.

Matthew Fox is a member of the FSWA. You can find more from him on Twitter @knighthawk7734 or as co-host of the Fantasy Football Roundtable Podcast.