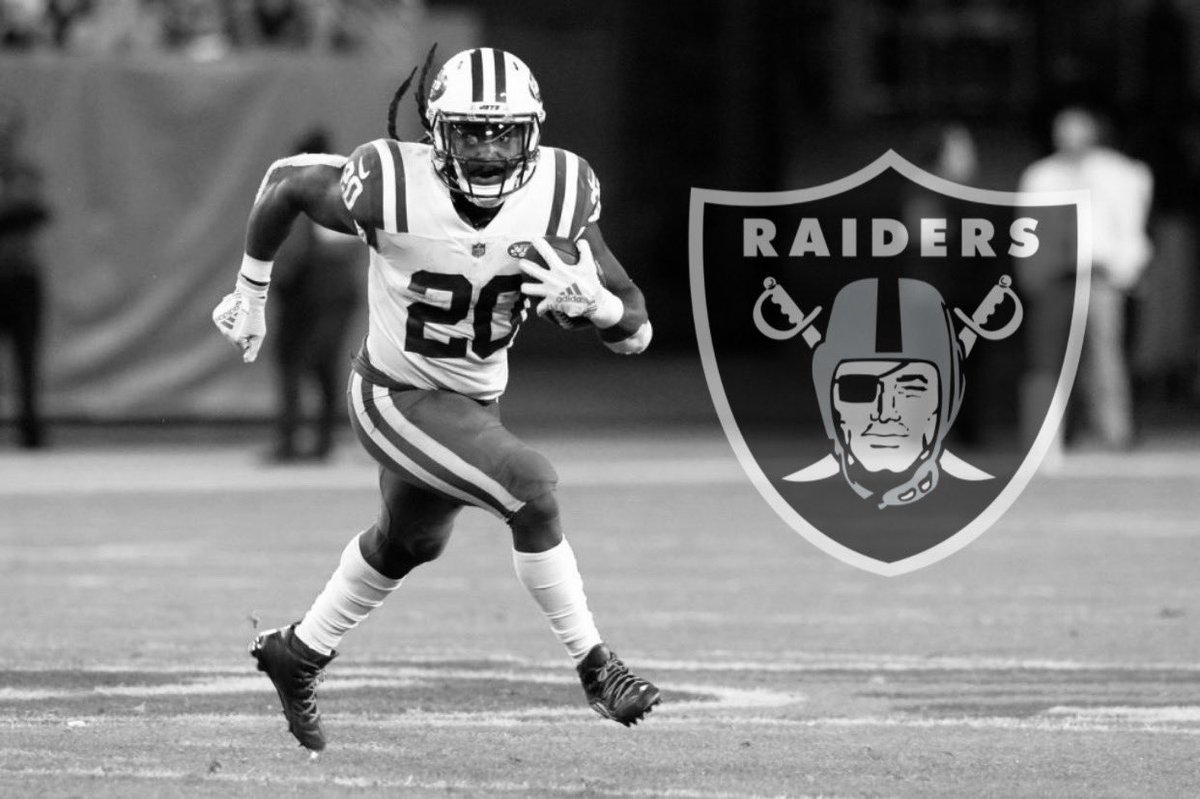 Former Cleveland Brown and New York Jet Isaiah Crowell found a new home. Crowell signed with the Raiders this week making it his second team in two years and the 14th new player acquisition for the Raiders this off-season. While the Raiders continue to rebuild they are making very underrated moves to put together a good football team. Jon Gruden and Mike Mayock continue to work their magic in their first offseason together prior to the NFL draft where they hold 11 draft picks including three in the first round.

As the graphic shows you can see the full career stats of Isaiah Crowell since entering the NFL as a undrafted free agent in 2014. Crowell made an instant impact with the Browns in his rookie year rushing for a career high 8 touchdowns. Crowell started 51 out of 77 games in his five seasons. One of the biggest knocks on Crowell’s game is his pass blocking and work as a third down back. It’s worth noting that Crowell has had at least 19 receptions in every season after his rookie year in 2014. In 2016 a 40 reception season resulted in 319 yards both career highs for the journey man running back.

Crowell turned 26 in January and will be playing for his third team in his sixth season in the NFL. The Raiders front office seemed very excited by all reports to add a veteran RB like Crowell for very cheap. Crowell signed a one year deal with Oakland worth a maximum of $2.5 million which can only mean that the base salary of that contract is nothing special. Overall this looks like insurance for RB Marshawn Lynch who has told the Raiders he will decide on retirement after the NFL draft. The current Raiders backfield consists of Jalen Richard who had a career high 68 receptions for 607 yards in 2018 finishing as the RB29 in PPR leagues (Crowell finished as RB33 in 13 games). The Raiders also have DeAndre Washington who has 735 yards and four touchdowns in three seasons with Oakland as well as hopeful breakout dynasty stash Chris Warren who posted 1,392 yards and 15 touchdowns while at Texas. It would seem all but likely that Crowell will step in as the starting RB in 2019. Neither Richard or Washington have ever had more than 87 attempts in a season while Crowell hasn’t had less than 143 carries in a season until 2018 where he only played 13 games.

At 5’11” and 225 lbs Crowell is viewed as a “plodder” RB and without a 1,000 yard season to his name through five seasons it’s hard to argue. Crowell finding a new potential starting job in 2019 gives him a chance to become the 7th undrafted free agent in NFL history to rush for 4,000 yards with roughly 200 yards next season. In a shortened season in 2018 Crowell’s 3.27 yards after contact per attempt ranked 10th out of 55 RBs who had at least 100 touches. Consistency is the big thing lacking when you look at Crowell’s stats. The ex Georgia Bulldog has only three 100 yard games in the past two seasons, in 2016 Crowell had four 100 yard games alone. The lack of trust in the pass game has hurt Crowell’s true value he is the definition of a committee RB as I dug deep into the numbers I noticed he hasn’t carried the ball 20 times in a game since 2015. While not exciting or talked about much in 2018 Crowell did put up 685 yards with a 4.8 yards per carry for the Jets. Obviously many of us stat nerds know that 219 of those yards came in one record breaking performance against the Broncos but nonetheless Crowell has the ability to produce in the NFL. In that game against the Broncos he showed great patience and vision to carve up the Broncos with big play after big play. Crowell set the Jets franchise record for rushing yards as well as setting an NFL record with 14.6 YPC the most ever for a RB with at least 15 attempts.

This move by the Raiders is very smart in an effort to not tip their hand before the NFL draft by adding another RB. While most mocks with myself included had the Raiders for sure taking a RB that seems less likely now. Jon Gruden was quoted to saying “the door is always open for Lynch”, I however am not really buying that. I would be surprised if Marshawn Lynch returns next year and I still fully expect the Raiders to bring in one of the RBs from this underwhelming 2019 draft class. I would be fairly confident thinking Crowell will be given the keys to the Raiders backfield. Doug Martin and Marshawn Lynch would leave roughly 262 carries from 2018. Short term value for Crowell should be decent and I feel I’m not the only one who thinks this. ESPN’s Mike Clay released some early projections for the ex Browns and Jets RB. While these projections might be a little too high for me I do have interest in rostering Crowell on my dynasty teams in 2019.

So let’s talk dynasty value. How do you value Isaiah Crowell going forward? My thought process really starts with consistency because let’s be honest there is not much upside with Crowell he is very much what you see is what you get. For a guy who really lacks consistency in his play from week to week, he is the epitome of consistency in PPR dynasty leagues. Crowell has finished as the RB33 in three of his five seasons. In fact, in four of five seasons, Crowell finished between RB27-RB33. The highest Crowell has finished has been RB14 after the 2016 season where he finished just 48 yards short of 1,000. Crowell also had 40 receptions that season and was really viewed as a great value in dynasty, fast forward to 2019 and singing a one year deal with another new team not many dynasty owners are rushing out to acquire Crowell. I would be considering Crowell a buy as I’m mostly a dynasty player who isn’t looking to overpay for a top tier RB. There is a big risk in acquiring Crowell right now because of how fresh the news is but when rookie drafts officially kick off he is a player who could be added to a deal when attempting to move up or down a draft board. There are times that dynasty players have to view some players as a rental much as NFL teams do. Crowell can be that guy as a contending team who can use an RB3 likely wouldn’t have to pay much to acquire him. Being a good dynasty player isn’t always about acquiring studs especially in deeper leagues players like Crowell can be key role players getting your team into the playoffs year after year. As most long term dynasty players know once you get into the playoffs anything can happen.