Isaiah Hodgins is one of the most underrated WR prospects in this draft. @SportsfanaticMB tells you why he might be the fantasy steal of your rookie draft. 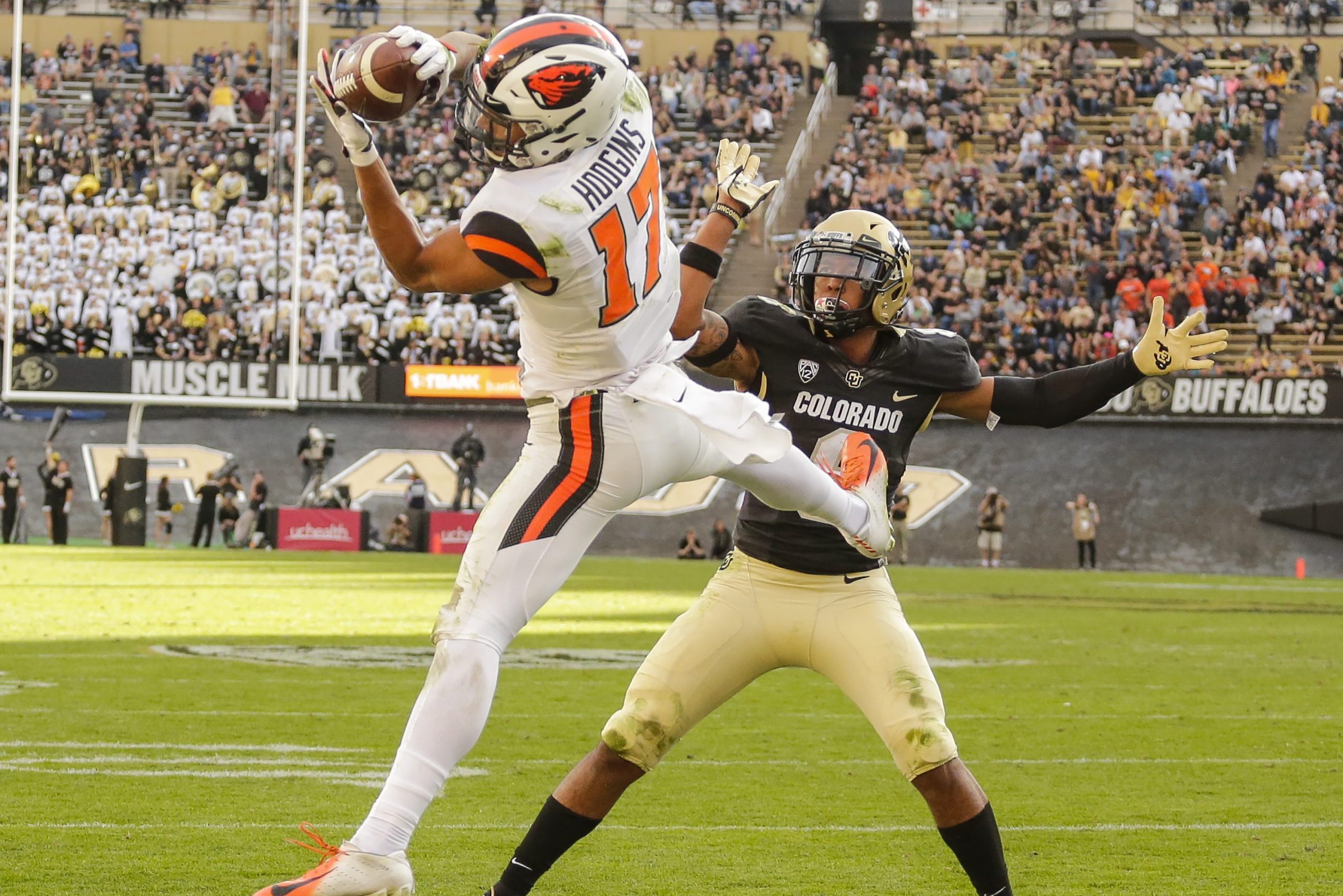 Isaiah Hodgins is a junior wide receiver out of Oregon State. Hodgins joined the Beavers as a four-star prospect out of Walnut Creek, California. In his freshman season while he played in all 11 games he only started in six of them and made a few big plays but nothing that stood out.

His role increased his sophomore year and again played in all 11 games and increased his starting role to nine games. He had a solid season in the PAC 12 and for Oregon State, he finished the season leading the team in receptions and yards. In a game against Nevada, he tied the Oregon State school record with 14 receptions. With his step up in play his sophomore year he started to shine a little bit of light on his play finishing the year with a receiving grade of 84.6 and getting an All Pac-12 Honorable Mention.

After two seasons on a team that had a combined three wins many were not paying attention to Oregon State. As 2019 rolled around Hodgins was on the fringe of being in the discussion for a top NFL prospect but many weren’t sure what he could be as the top option. We quickly found out just how good Hodgins can be. Hodgins started making incredible catches and helped the Beavers get to five wins. He finished 11th in the NCAA in receiving yards, 7th in touchdowns with 13, and 7th in receptions with 86. The most impressive part of Hodgin’s college career in three seasons he has dropped a total of three passes out of 179 catchable passes. Hodgins also belongs to the NFL lineage, his father played seven years in the NFL mostly as a fullback for STL, ARZ, and NYJ.

Hodgins made great advances in the receiving game in his junior season as you can see he ranks in the top 10 in some intriguing stats courtesy of https://www.pff.com/

The table above highlights how instrumental Hodgins was to the Oregon State offense. In Hodgin’s big play % he took 28 plays more than 20 yards, four of which resulted in touchdowns. Stats courtesy of https://expandtheboxscore.com

As you can see from the table above Hodgins was used throughout the game. While he takes a dip in targets in the third quarter. He is solidly involved in every quarter, which is what you want from a wide receiver. Available and producing in every quarter. Stats courtesy of https://expandtheboxscore.com

Besides the stats showing what Hodgins does on the field lets take a look at the strengths he can bring an NFL team.

While Hodgins won’t be up there with the fastest in this class, I love how he sells the inside route and then cuts back outside to create the separation for an easy touchdown. He uses his quick cuts to create enough separation on his routes to give enough room for the QB to get him the ball.

The concentration and grip he shows here are outstanding to me. Hodgins has some of the best hands in the game. Most WR would give up, or have the ball fall instead of bringing it back into their hands. When you put on his film you will see a ton of one-handed catches, some of which will make your mouth drop.

Put the tape on Hodgins and you’ll see his catch radius is elite. His big frame and willingness to dive for plays makes him an elite prospect.

There are a couple of areas that seem to stand out for Hodgins. The one area I would point out is he doesn’t have blazing speed. He likely isn’t going to run by defenders and can get caught from behind. While he can be deceptive in the open field you won’t see him run away from many defenders. Some analysts are worried about Hodgins route running and you will see it questioned at times throughout the process. While I do think he is a bit stiff at times the route running doesn’t matter to me because he is elite in other aspects of his game, but I did feel it needs to be mentioned as others will bring it up.

Hodgins is a big-bodied receiver with vice-grip hands. His hands and body control are elite and could be argued with the best in this class. He has shown off great concentration and his catch radius is up there with the best in his class. He put up a ton of production his junior year in a power five conference on possibly one of the worst teams in college football. Hodgins won’t be mentioned with the top wideouts in this class, but what is a shame is he isn’t being mentioned with that next tier. I firmly believe Hodgins deserves to be in the top 10 of wide receivers this year for fantasy. Where does he likely go in the NFL draft?

The 2020 draft class has a ton of talent at wide receiver, which likely means some of the talent will be pushed down. Hodgins likely goes somewhere between rounds 3-5. While I do honestly think most teams could be in play at this point teams like MIA, DET, NYJ, WSH, CIN, and DAL (assuming they move on from Cooper) will likely be drafting wide receivers at this point in the draft. I think the best landing spot for him in fantasy would be the New York Jets. He would be the biggest receiver on the Jets and I think the best red-zone option to date. I would also love to see him land in Cincinnati if they do take Burrow and assuming A.J. Green isn’t back, as I think Burrow and Hodgins could connect easily on jump balls and back corner fades.

That completes the Isaiah Hodgins draft profile. Continue to check back as new profiles will be released every couple of days. If you want to see more of my work you can find me on twitter @SportsfanaticMB and also on my podcast Fantasy Football Roundtable, where we will be discussing all the hot off-season topics and prospects.